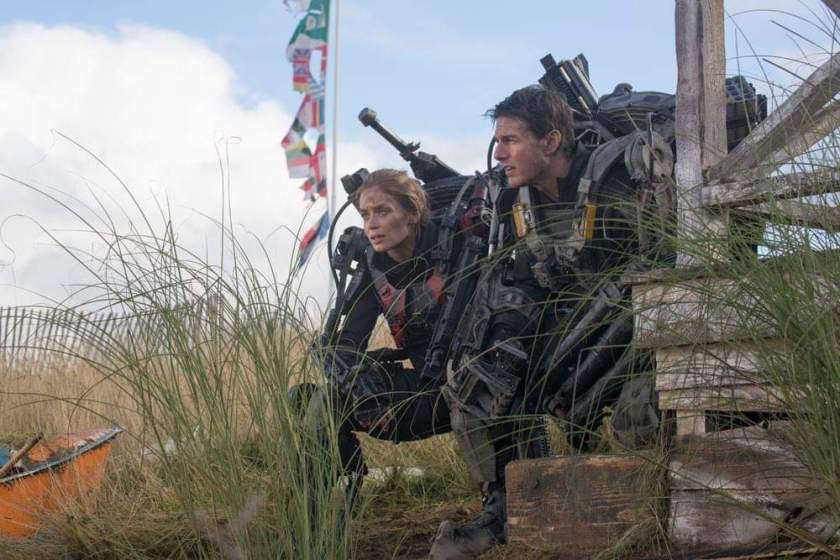 In a summer full of sequels and reboots, and sequels of reboots, it fairly often pays to keep an eye out for any movies out there that are a tad more stand alone in nature. Well, here’s some free advice; when looking out for something fresh, it always pays to keep an eye on the little guy. And the little guy in this case (figuratively AND literally), is Tom Cruise.
Edge Of Tomorrow, despite it’s hideously bland title, joins that small but growing list of original modern sci-fi flicks that seemingly come from nowhere and end up being utterly awesome. Films like District 9, Moon, Chronicle, Monsters, Looper and Cloverfield played in the big budget blockbuster sand box but also was whip-smart and exhilarating original while still homaging previous movies in bold new ways. Starship Troopers meets Groundhog Day is the first thing that leaps to mind when searching for ways to quickly describe this flick and believe me, it’s just as entertaining as either.
Aliens have invaded our planet and seem to be almost supernaturally difficult to stop despite us humans being kitted out in awesome mechanical power suits that contain everything except a kitchen sink and spinning rims but we continue to fight and a massive attack – on the beach in Normandy, no less – is planned.
At this point enter Tom Cruise as weasley Lt. Col. William Cage, a man who, despite his rank, has never seen combat and before you can say suicide mission is sent to the front lines to die by a sadistic General. And die he does, as the big offensive proves to be a chaotic washout, but as luck would have it a freak accident means that time resets to that morning whenever he gets killed – and he gets killed a LOT – but help is at hand from super soldier Emily Blunt who might just have some experience at these freakish time jumps.

Edge Of Tomorrow, is devilishly smart, utilizing it’s high concept with pin point laser accuracy and unleashing a torrent of jokes and action scenes that make you care for Cruise’s less than heroic character almost solely by the sheer brutal prat falling of getting violently killed over and over and over again. It’s incredible, perverse fun and as it uses the dying and respawning concept from a billion of first person shooter video games, it actually plays as a better videogame movie than actual movies that are actually based on videogames! Scenes of a fully trained Cruise, locked and loaded in a battle suit, effortlessly blowing away the spiney, day-glow alien invaders will have you reaching for a game pad that simply isn’t there
The director here is the talented (if a tad inconsistent Doug Liman), who puts in his best work since The Bourne Identity and both Cruise and Blunt (ESPECIALLY Blunt) are magnificent, but the film also benefits loading it’s supporting cast with familiar character actors (all hail Bill Paxton!) all doing their best to add to the varied flavours this film provides.

In closing, this is top-notch entertainment that is fiercely original, yet enjoyably familiar, and one-off movies of this calibre that don’t happen to be parts of connected universes and endless sequels need to be embraced and – much like Cruise, stuck his cyclical timeline – experienced over and over again.
🌟🌟🌟🌟🌟