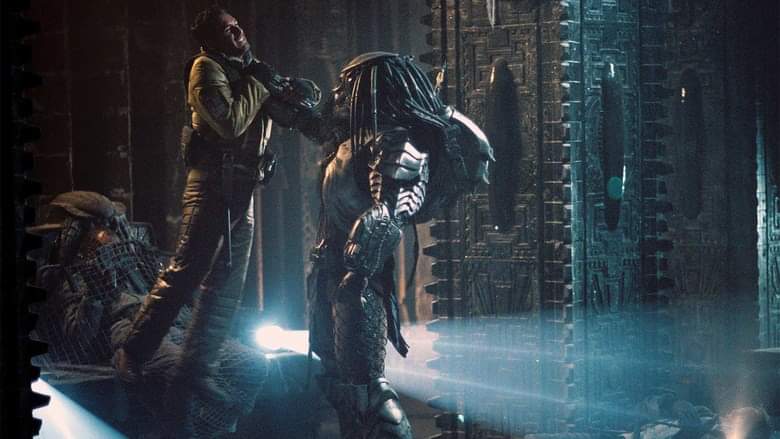 It’s all Predator 2’s fault…
Merging two franchises together isn’t exactly a new thing – we live in a reality where Dollman Vs. Demonic Toys exists, after all – but merging a couple from series that were so high profile was still pretty new, so when a familiar, xenomorphic skull was spotted on trophy wall in the wacky 90’s sequel, speculation ran riot. Comic company Dark Horse ran with the idea first, slamming out a short story or two and then expanding with a pretty cool miniseries involving the two species colliding on a distant farming planet colonised by humans and eventually spawned various sequels and spin offs. Then in ’94, Capcom released a colourful scrolling beat em’ up using the licence – my point is, by the time we got to 2004, the concept was fairly well worn but seeing as the Alien movies had stalled at their fourth installment and the Predator series had only cleared two so the choice was made to kill two, slimy, dripping birds with one plasma blast and have them fight.
However, we are looking at a pair of franchises that have collectively featured work from such auteurs as Ridley Scott, James Cameron, John McTiernan and David Fincher, so who could possibly fill the shoes of these truly great filmmakers?
Why, the director of Resident Evil of course…
Maybe it’s fitting that a man with multiple video game adaptations on his CV would turn in a movie that feels more like that Capcom beat ’em up than any of the movies that preceded it but when you hire Paul W.S. Anderson, that’s what you get…

It turns out the Predators use captive alien queens to provide hunting stock for them to prove themselves in battle in a coming-of-age, rite-of-passage type of deal and they’ve been using ancient civilisations on earth to do it. One of their giant sacrificial pyramids has been found under the ice in Antarctica and the Weyland corporation are racing to claim it first but not before gathering a stock group of character actors and Paul W.S. Anderson regulars, each one the top person in their field, to populate the expedition. Upon getting there we find that a trio of Predators have decided to dust off the ancient hunting ground, fire it up and wake up the queen to start laying eggs in order for them to earn their stripes which sets all three species against each other in a deadly menage a trois of teeth, spears and guns that could spell the end of life on earth as we know it.
I’m going to go easy on the criticism here as the flaws are pretty systemic of what the studio was trying to achieve; thin characters, non-existent plot, frustratingly PG-13 rated violence and any and all removal of those psycho-sexual overtones from Gigers original creation.
And yet if you were 10 years old it’s very likely that you’d think this movie is the coolest thing you’ve ever seen and it has to be said, at the time it was a legitimate kick to see the Predators again on the big screen after a 14 year absence (the swaggering lead Pred is by far the MVP of AVP), not to mention a full sized rampaging Queen Alien and an impressive slow motion shot of synchronized facehuggers flying through the air toward their prey.
The alien on alien action isn’t bad either, relying on more classic man-in-a-suit rumbles with CG enhancements than going all out on a blurry, digital claw fest, in fact Anderson’s visuals are surprisingly strong here with an opening shot of what appears to be the silhouette of a curled up Queen floating in space revealed to be a spikey satellite in orbit.

Cool shots aside, and despite it’s truly loathsome sequel retroactively making this movie look like Citizen fucking Kane, this still really is a weak shadow of far greater movies that positively reeks of a cynical cash grab. In fact it was this kind of filmmaking style that led to other sequels of violent movies getting watered down in order to lure in a younger audience, like the 4th and 5th attempts at Die Hard movies or Terminator: Genysis.
A far better poster than a movie, it’s tag line openly boasted “Whoever Wins, We Lose.”
“We” being the cinema goers, presumably.
🌟🌟