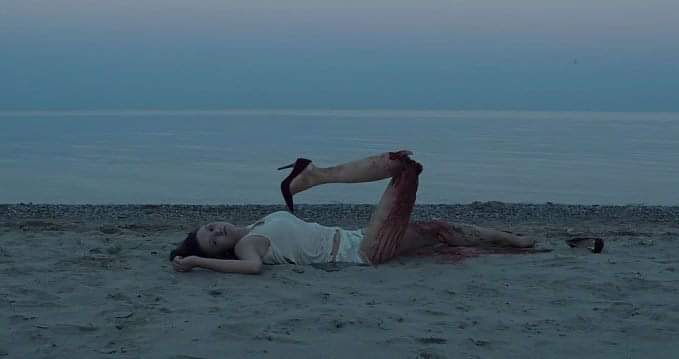 While that may sound a little thin, even for a horror movie, it’s the little details that win through. The cast, the events hinted at and not shown, the fact that the group of teens oddly resemble the Scooby Gang (one of the gang even resembles Velma). The cinematography is also a huge plus with shots set out that has you scanning the frame for anything menacing. The back drop eventually moves from suburbia to the dilapidated ruins of Detroit which only heightens the already huge sense of dread.
And then there’s the villain.
The nameless thing everyone is so terrified of is a wonderful creation.
“Passed on” via sexual intercourse and invisible to everyone but it’s proposed victims it can take the form of anyone from anyone from a family member (alive or dead) to some creepy old lady.
It never stops coming for it’s victim and moves at a slow deliberate pace, easy to out-run, impossible to lose. The only way you can escape is to continue to “pass it on” by having sex with someone else. However, if it gets that person it’ll come right back to coming after you and how it exactly kills is left creepily vague.

In fact creepy is the key word here. While lacking a lot of overt “jump scares” the scares are more of the scream “TURN AROUND” at the screen quality.
In short this is a wonderfully effective frightener and one of the best damn horrors I’ve seen in years.
Follow that.