When you have a long running franchise who has a main antagonist known for being a little free and easy with the quips, there’s a very real danger that sooner or later your film series may spiral dangerously into the realms of parody. It happened to that wisecracking dream demon, Freddy, and here, in this ambitious but muddled horror comedy, it happens to Chucky.
To be fair, the doll-imprisoned soul of Charles Lee Ray flirted with going overboard with the laughs in his previous outing, Bride Of Chucky, but solid direction, good jokes and a game cast kept it firmly on the rails. It’s direct follow up, however, flies off them so violently that any comparison between where the franchise started in 1988 is virtually impossible.

As subtle as a chainsaw haircut and twice as messy, Seed Of Chucky jumps ahead a few years to pick up the misfortunes of Glen, the mutant offspring of Chucky and Tiffany’s night of plastic passion. Being used and abused in a sham ventriloquist act while also simultaneously suffering urine unleashing nightmares of brutal murder and extreme gender confusion, Glen escapes to Hollywood to find his parents. Find them he does as their dormant bodies are being used to film a cheapjack horror movie based off Chucky’s murder sprees (this movie is crazily meta, often to it’s detriment) and so Glen ressurects them and awaits the bliss of finally discovering who and what he is but is horrified to find out that they are both remorseless killers. Surprisingly both are willing to abstain from wholesale slaughter for the good of their new family unit as they hide out in the attic of actress Jennifer Tilly (see? Meta!) and cook up plans of transferring their souls into the former Hollywood darling and her chauffeur but in no time all the killing itch proves too strong for Chucky…

Seed of Chucky’s main problem is oddly also it’s biggest draw in that this is a deeply strange movie and has no qualms about showing it. The massive swing from the original movie’s mystery/thriller tones is so extreme it’s easy to forget they were chiefly written by the same person; Don Mancini. Mancini, who finally takes the directorial reigns here after creating Chucky is eager but inexperienced, achieving much better results with the following two installments, Curse and Cult Of Chucky respectively. And yet, when the weapons grade crazy hits, it works pretty well with Tilly especially sinking her teeth into the dual roles of Tiffany and washed up version of herself and who nails all the best lines (“I’m watching Bound, Gina Gershon is fingering me.”), the rest of the cast is equally eccentric – where else would rapper Redman share a cast list with Hannah Spearitt from S Club 7? – and mega props to John Walter’s cameoing as a sleazy tabloid photographer. But in the end, the minor points gradually overwhelm the good, with the central character of Glen (voiced by high pitched Hobbit Billy Boyd) ultimately being far too annoying and a climax that’s way too unfocused to satisfy.
Taken on it’s own terms Seed Of Chucky ably succeeds in it’s aim to be a whacky, gory, farcical, black comedy but when compared to the rest of the series it’s not much more than a clumsy oddity. I mean, I love a good bad taste comedy as much as the next guy, but was the world really crying out for a scene of Chucky jacking one off? Sure, it’s funny, but it’s ultimately harmful to the overall mystique of the character, like watching Freddy Krueger undergo colonic irrigation on a Japanese gameshow or Michael Myers going to a third world country to get illegal butt implants. 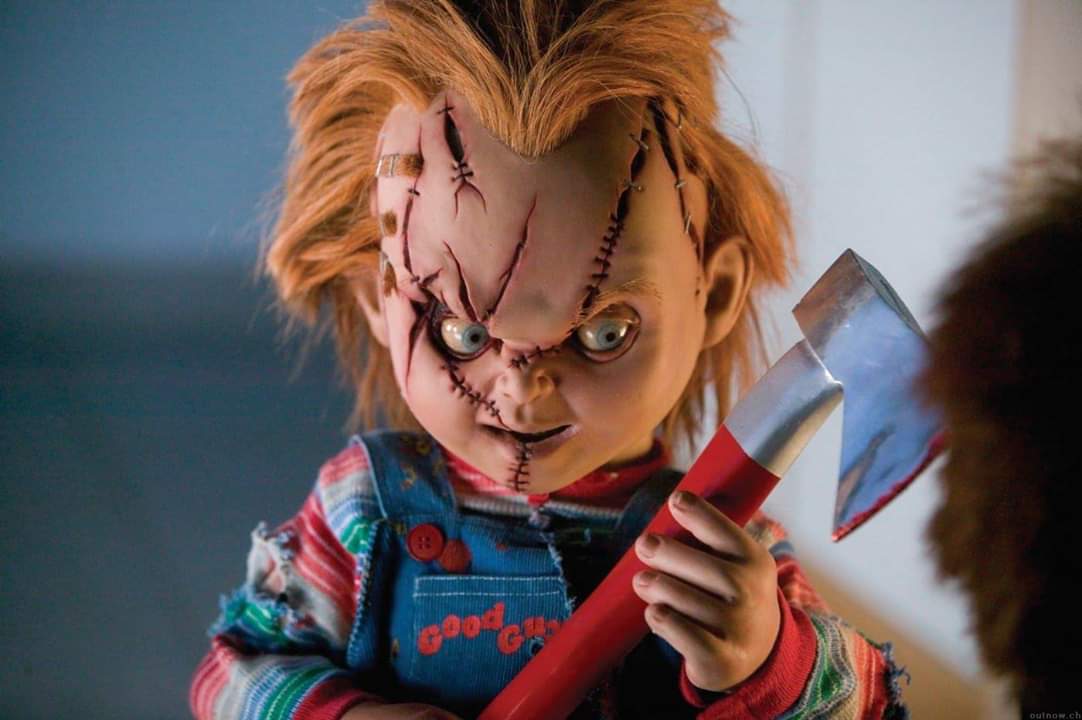 “Look around you Tiff, this is nuts!” Bellows the Chuckster, ironically appealing for calm during one of the movie’s more irritating moments, “And I have a very high tolerance for nuts!”
You won’t.
🌟🌟