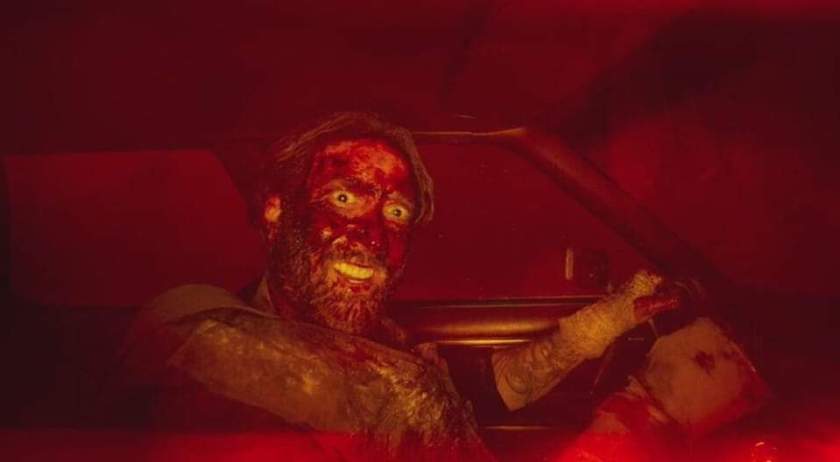 That feeling you get when Nicolas Cage emerges from his self imposed, bill paying, direct to DVD hell and stars in an absolute blinder is a rare thing these days, so when it happens it’s very important to grab hold of it like a living thing and nurture the bastard for all its worth.
Mind frying, LSD trying, gore flying, grindhouse meltdown Mandy IS the art house/horror/revenge flick you have been waiting for.
Structured much like S. Craig Zahler’s Brawl In Cell Block 99 (a false sense of calm explodes into extreme violence of almost absurd proportions) while shot with the burning reds and choking claustrophobia of Nicolas Winding Refn’s Only God Forgives, Mandy tells the tale of a damaged, reclusive couple who fall afoul of a gang of psychotic cultists.
Gentle lumberjack Red Miller (Cage) and his whispy soul mate Mandy Bloom (an ethereal Andrea Riseborough sporting eyes so huge she makes your basic anime character look like Mole from Wind In The Willows) lead a simple, loving, yet reclusive life in the middle of nowhere in 1983.
Into this peaceful life roll The Children Of The New Dawn, a deranged, Mason-esque cult led by the petulant Jebidiah Sand (a magnificently unhinged Linus Roache) who takes an immediate shine to Mandy and wishes to induct her into his family. Enlisting the additional aid of an animalistic, monstrous biker gang that’s one part Sons Of Anarchy two parts Hellraiser, they house invade and desimate the couple.

Freeing himself, Red does what any sensible, rational guy does in that situation: he forges himself a wicked-sweet battle axe and hunts them all down in a series of ever more violent encounters that include but isn’t limited to decapitation, immolation and good ol’ fashioned chainsaw duels (you don’t fool me guys, I recognize that chainsaw gag from Phantasm 2…).

Thus is set in motion a crazed hallucinogenic revenge rampage, bathed in lashings of phantasmagoria and drenched in gore. Cage, virtually mute for the first half of the movie, enabling the other actors let their characters beathe, explodes from his marks in rousing style, employing every maniacal tic and gurn in his arsenal to dizzying effect. Screaming, eyeball rolling, snarling, it’s all here and thankfully (and surprisingly) director Panos Cosmatos is more than able to keep up with him, employing filters and lighting that make the whole thing feel like a living 80’s album cover of a spastic prog rock band. In fact, despite of Cage’s heroic return to his more over the top performances, this really is Cosmatos show, using many different tricks and quirks to create a world utterly baffling and illogical (keep an eye peeled for the Cheddar Goblin commercial on tv).

Obviously, this isn’t for everyone, Eat Pray Love, for example didn’t feature a hulking, monster, biker with a knife for a dick, but if your tastes lean more into the extreme the Mandy is most certainly for you. It’s straight up fucking exhilarating.
All hail Cage. All hail Mandy. All hail the Cheddar Goblin.
🌟🌟🌟🌟🌟