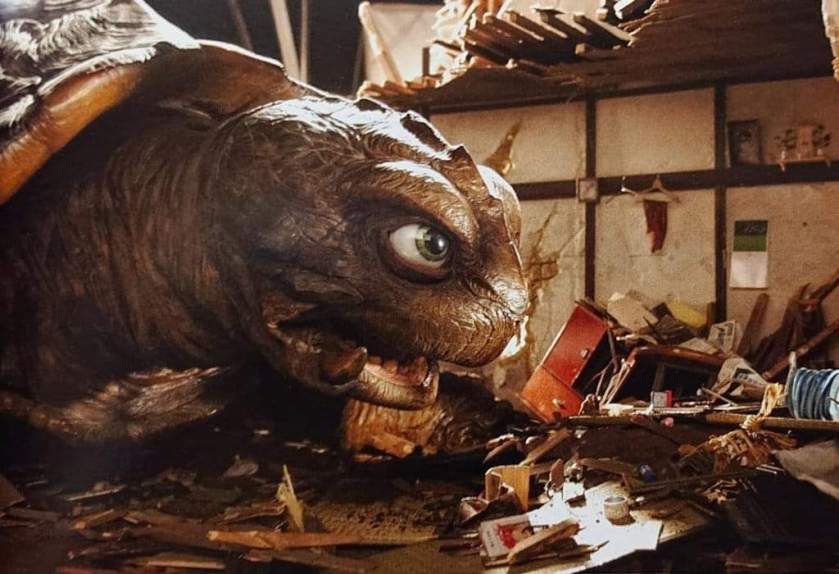 By the time 2006 rolled around, the rights to everybody’s favourite flying fire turtle has switched hands and plans were put in place to bash out a brand spanking new Gamera movie to celebrate his 41st birthday (odd choice). Two years prior Toho Studios had pulled a similar trick for the King Of The Monsters himself, with the highly cartoonish romp Godzilla: Final Wars so what were the filmmakers at Kadokawa Studios going to do with their newly minted franchise star: go full action epic? Take Gamera back to his roots? Find him a giant heated terrapin tank sprinkled with marbles to chill in?
Oddly enough, the studio opted to rub a little Studio Ghibli into the mix and tried to make a whimsical tale of a boy and his turtle with more than a little hint of Hayao Miyazaki’s influence guiding the story; sort of My Neighbour Turtle-o if you will.
Back in 1973, Gamera sacrificed himself in a battle to the death with three bloodthirsty Gayos by detonating himself like a firework at an Elton John after party and was never heard from again but over thirty years later a small boy finds a tiny egg while out playing by a river. It hatches into a perfectly normal looking turtle but soon enough displays abilities that stretch beyond the accepted capabilities of your garden variety amphibian; like hovering, or accelerated growth, or the alarming capacity to blow a fireball…
Gamera’s journey from pet to Kaiju takes another twist with the chaotic arrival of Zedus, a brutal, floppy-spiked uber-bastard with a weakness for gulping down humans like popcorn and who sports surprisingly shapely legs for a giant lizard. Having grown to a size where he can fight and being flanked by his loyal child friend, Gamera squares of against his carnivorous foe but can an infant Gamera, who’s powers haven’t even properly manifested themselves yet, hope to stand a chance against this lethal predator and even if he does, what will the government do with him? 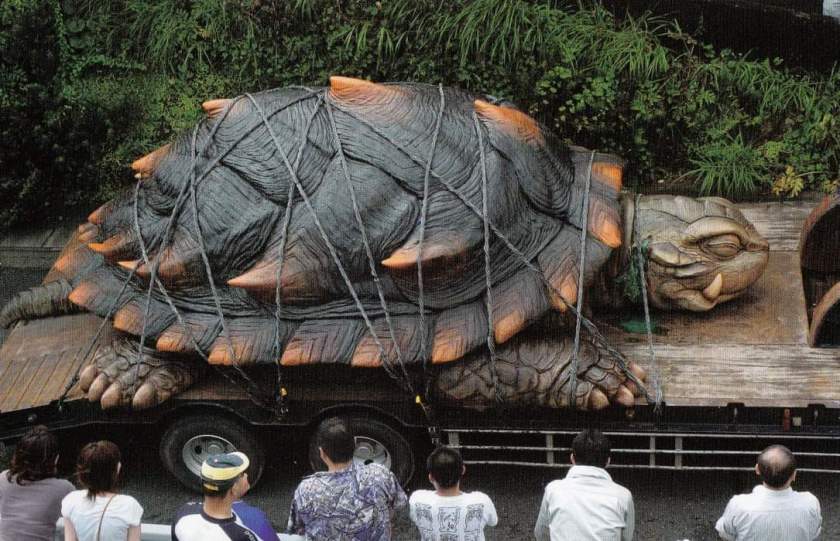 Gamera The Brave is an utterly decent movie and actually quite a good place to start off if you have a young ‘un who wants to indulge in the Japanese side of the Kaiju genre (who is also ok with subtitles) but for more hardened monster movie enthusiasts it’s more of a slog.
Everything from E.T. to Bumblebee has dealt with the similar premise of a troubled, lonely adolescent finding purpose in an adorable being with devastating destruction powers but GTB doesn’t try anything new or particularly ground breaking and is merely happy to piggyback on the shoulders of better films.
The film picks up sufficient burst of energy at the requisite building bashing ending but again, brings about as much originality as spending a weekend watching UK Gold. It doesn’t help either that for all Zedus’ tricks (he sports a tongue that would make Gene Simmons take his own life), he’s a fairly unmemorable villain and literally has not one iota of back story, which is strange in Gamera’s world of LSD inspired antagonists.
More calmly measured than Gamera’s original run of movie’s but falling far short of his awesome 90’s trilogy, this is one Gamera film that for oddly suffers from not being strange ENOUGH (something I didn’t think I’d ever have to type) despite containing a moment where the heroic turtle gets his head lodged in the upper floors a skyscraper and just hangs there with his legs dangling out into space.

The last Gamera movie made to date, it seems high time what with such a huge clutch of Toho’s Kaiju back characters making big budget comebacks both in Japan and the West (not to mention King Kong joining in on the fun), someone should dust off that shell and get Japan’s champion of children back on the big screen in some shape or form.
Lights, Gamera, action?
🌟🌟🌟