Gliding from the shadows and into cinemas like it’s ethereal, white-masked antagonist, Halloween II was something of an anomaly back in the heady days of 1981, as sequels, let alone SLASHER sequels weren’t really the norm despite the fact that these days there’s fucking hundreds of the bastards.
Even John Carpenter himself, director of the peerless original, initially drew a blank when asked for a follow up, chiefly citing that all the story had essentially been told and that a sequel had nowhere to go. Despite ultimately getting talked around (Carpenter, by his own admission, likes getting paid), Carpenter whipped up a story that starts literally the second the original ends, hired first time helmer Rick Rosenthal to direct and essentially sat back and let others work it out.
Smart man.
There’s a odd sense that not many of the returning faces on either side of the camera are overly enthused to be dragging out the story of Myers and co. for a sequel but to give it it’s due, Halloween II has more than it’s fair share of memorable moments, they are just lodged in a simplistic sequel that ups the nasty considerably, but not the quality.

After Michael Myers’ Halloween night rampage ended with jittery psychiatrist Dr. Loomis plugging his ex-patient more times than 50 Cent, the quiet town of Haddonfield should be able to catch a breath of relief. However Michael somehow isn’t dead and after circling round and claiming some random victims to up his points, he tracks his original target; Laurie Strode (a begrudgingly returning Jamie Lee Curtis who spends the movie either sleeping, screaming or mute) to the local hospital.
From here on in it’s fairly standard stuff as he wanders the bizarrely empty corridors of the place (is there seriously NO ONE looking after a room full of new born babies?) and offing the skeleton crew of stock characters who work there in grisly fashion and all the while Lee Curtis and Donald Pleasance patiently wait first the script to give them something to do. 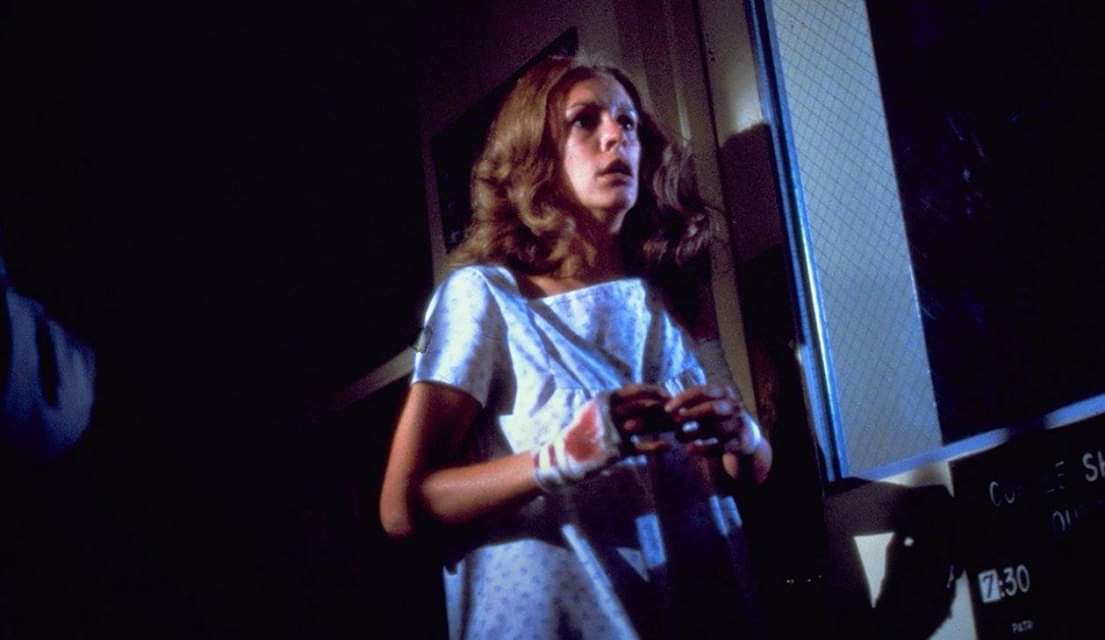 Halloween was an intelligent, spry and masterfully subtle frightened that is the cinema equivalent of an all expenses paid slap up meal of the juiciest foods you can imagine, whereas Halloween II is more a Morley’s Chicken the night after: still pretty satisfying in it’s own way and yet utterly incomparable to what’s come before. But that doesn’t mean there isn’t morsels to savor.
Firstly regular Carpenter collaborator Alan Howarth’s redux of the stupidly icon score is gothiked up to the fucking nines with massive heavy organs blaring alongside the usual synths making something virtually perfect even better. Secondly, better for worse, this is the film that drops a bombshell that Laurie and Michael are in fact siblings and gives the unstoppable killer an unnecessary motive and a plot device almost every subsequent sequel elected to follow until 2018’s Halloween scrubbed it from existence. Finally, although it isn’t big, or clever, some of the kills are impressively cruel with the film boasting a mean streak a mile wide. In fact the most squeamish thing the film provides has next to nothing to do with the film at all with a child being admitted after someone has snuck a razor blade into a trick or treat apple.
The actors are fine, portraying the cute/slutty/horndog/stern/other stereotypes the genre demands and Curtis continues to give good damsel but it’s Pleasance who has the most fun, hurling exposition and doomsaying around like it’s a sport.
“I’ve been trick or treated to death tonight!” complains a grumpy suburbanite after Loomis loudly demands that he call the police. Cue a withering stare from the veteran thespian: “You don’t know what death is!” he deadpans. Cue music.

Better than most, yet worse than some, Halloween II ticks along just fine despite starting the infuriating sequel trend of never quite getting it’s antagonist’s mask right.
You might say it’s taking the Michael…
🌟🌟🌟