A year after Gamera and Gyaos adjusted the Japanese skyline with their gargantuan sized grudge match a freak meteor storm peppers the northern region of the beleaguered country. From the event emerges countless crab-like critters who engage in anti-social, hoodlum-like behavior like stealing glass bottles from a plant and eating people on a subway train (what’s the world coming to, crab-aliens in MY day had respect for their elders…), but soon their Starship Trooper-esque hijinks involve them building a huge weird plant formation in a major city. This “pod” starts emitting pure oxygen and scientists figure out that when it explodes it’ll not only destroy the city but launch more Legion spores to help the bugs procreate across the galaxy. This leads to Gamera making an appearance to sort shit out as only a 80 foot, fire exhaling turtle can, however the “legion” of bugs (see what they did there?) swarm Gamera causing him tremendous damage and forcing him to flee for his life as a legion “Queen” is born who immediately sets about forming a new pod that will launch her seed further than a steroid jacked shot putter. Can Gamera stop getting upsettingly and guesomely injured for five minutes and stop this insect plague from space or will Legion’s exploding spores prove that VERY unsafe sex will conquer all?
Building on his extremely solid work in Gamera: Guardian Of The Universe, director Shusuke Kaneko continues to turn out superlative work in the field of brawling Kaiju, balancing the human stuff (only here to keep the plot, stakes and twists explained with maximum efficacy) as to keep the massive amounts of monster action flowing smoothly. And WHAT action! 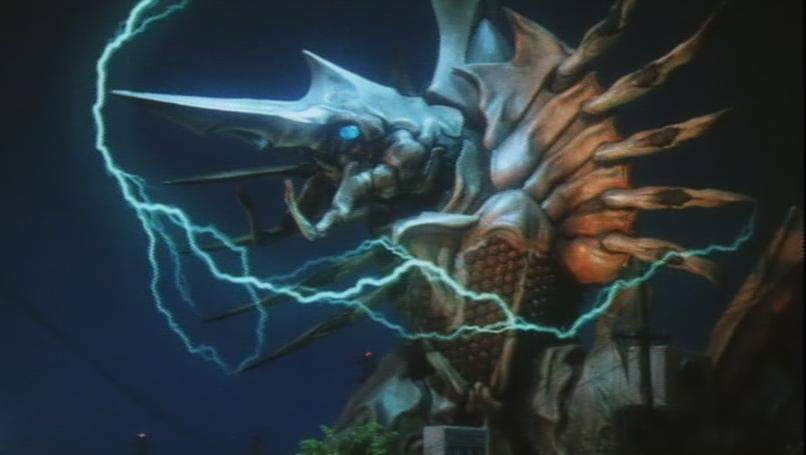 The film constantly innovates while it invigorates, slinging in epic anime-style imagery during it’s super-epic beatdowns while updating it’s hero’s abilities: watch in geek enshrouded awe as Gamera rockets by with his nifty new wings/fins and lands in a cool skid while firing off repeated fireball like a 80’s action movie hero. His spikey, mandible covered nemesis in this film is not only one of the most extreme Kaiju designs ever but, despite it’s very unconventional physique, proves to be an extraordinarily tough customer, dealing out a jaw dropping amount of punishment to our reptilian protagonist. Repeated impailings, holes blown in him, he even dives on nuclear sized pod explosion like a hand grenade in his endless, Christ-like quest for martyrdom.
Problems? None that aren’t inherently tied in to the genre in general although there’s a lot here that’s suspiciously similar to parts of 1995’s Godzilla Vs. Destoroyah, what with the driving plot of a multitude of crabby insect bastards acting like they’re in Aliens and then coming together and creating a giant monster; but then 2000’s Godzilla Vs. Megaguirus is essentially a ripoff of THIS movie so I guess turnabout is fair play.

Gamera 2: Attack Of Legion is as good as modern Kaiju gets; a fantastic balance of epic, city smooshing mayhem and well judged human bits that enhance the carnage instead of slowing it down.
You could say that the good points of this movie are (wait for it) legion.
🌟🌟🌟🌟