There is nothing like the moment when a long running franchise finally finds it’s identity, that installment where everything all finally comes together, clicks just right and the direction and tone for any movies that come after is definitively set.
The MCU had The Avengers, Mission: Impossible had Rogue Nation and the Fast And Furious movies had “Rio Heist”.
To be be blunt, until I saw the 5th edition I didn’t really care for the continuing on and off adventures of Corona gulping, muscled crash test dummy Dominic Toretto and his adopted criminal family of misfit car racers. Not being a petrol head, I found the movies silly, shallow and somewhat derivative and frequently turned my nose up at any claims that the original was “totally sick” or that “the sequel was alright, y’know” in a snobbish fashion.
And then it changed with a single movie which in one swift strike made me not only retroactively reassess my opinion on the movies thus far but had me salivating for more massively ridiculous installments.
Picking up the second the insipid part 4 ended we see turbo charged power couple Brian O’Connor and Mia Toretto free Dominic from his prison transport by making it crash so severely that no biological earth form should have any hope of surviving and then scattering to the ends of the earth to avoid the glaring spotlight of the law. Shacking up with the permanently disgruntled Vince from part 1 in Brazil they perform a heist that brings them into the crosshairs of a powerful crime boss who runs everything – including the corrupt police force – in Rio. Trying to figure out how to avoid death by multiple piercing by hundreds of bullets, they employ the talents of every memorable character from the last 4 movies to help out and to pull a heist so audacious that they can all afford to live like kings afterward. There’s a glitch though in the substantial shape of Luke Hobbs – a mountainous, federal agent who drives around in a vehicle that looks remarkably like a humvee fucked a tank and who seems to be powered soley by unbelievable tenacity and red meat – who has vowed to bring them in, no matter what.

Fast And Furious 5 pulls off the surprising trick of “pulling an Avengers” a full year before The Avengers pulled an Avengers and brings a bunch of disparate characters from different movies together to join forces in obliterating real estate and amassing box office and it’s delirious fun. Adding the motormouth chattering of Tyrese Gibson and Chris ‘Ludicris’ Bridges from part 2, for example, breaks up the endless, admiring man-gazing that Vin Diesel and Paul Walker often fall into that slowed down previous installments and makes for a very entertaining group dynamic. And then there’s The Rock…
Striding into the film like he just slept with it’s mother the night before and spewing out dialogue so hard boiled you could dip toast in Dwayne Johnson is quite simply the straight shot of pure, cartoonish masculinity that ties everything together.
It’s like the film rises to meet the challenge of containing such huge characters, routinely dealing out massive, world-scale action scenes that easily goes toe to toe with anything Michael Bay has put out over the last twenty years. An opening gambit that starts with cars being stolen off a moving train and ends with the two leads surfing a car off a cliff is unbelievably topped by the climax where Toretto and O’Connor lug a ten ton safe through the streets of Rio behind two super-charged automobiles while pancaking every vehicle with a siren. It is probably the franchise’s crown jewel and is exactly the point where the the series goes from nitrous-fueled also-ran and ascends into full-fledged action royalty.
It also can’t be overstated that Fast 5 – and the whole franchise from this point on – wisely doubles down on representation, with it’s multi-cultural cast appealing to all walks of life way before Marvel ever traveled to Wakanda. 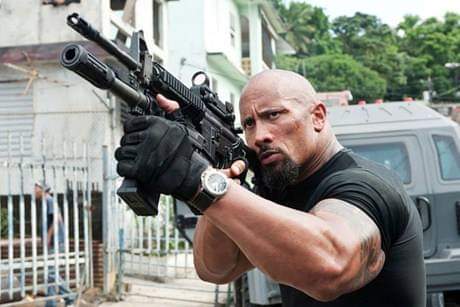 So sit back an enjoy as a tired series of movies suddenly slams into fourth and peels away from the crowd on it’s way to take it’s place as one of the premier action series in cinemas history.
Surely the hijacking of Hollywood is an impressive heist in of itself.
🌟🌟🌟🌟