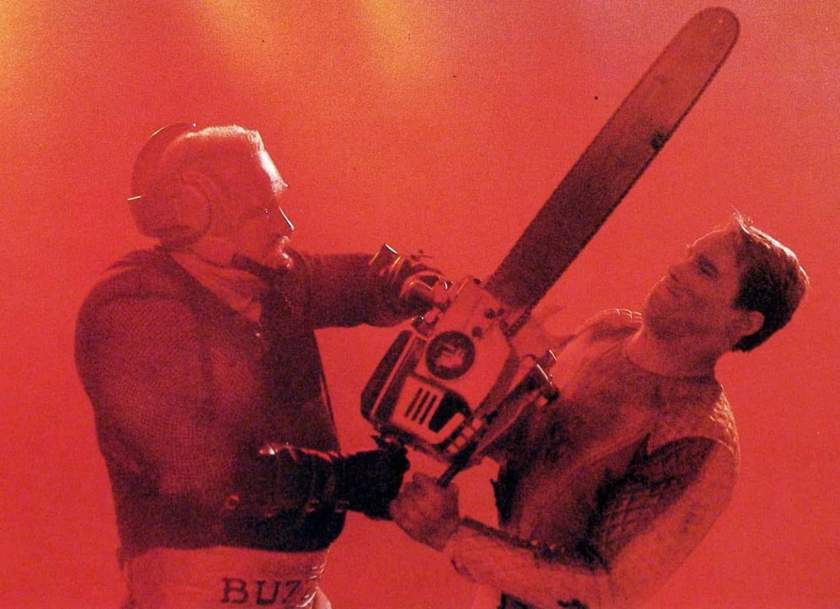 Arnold Schwarzenegger’s 80’s/90’s genre output usually sits in one of two camps. The first are the timeless classics that age impressively well due to well above average scripts and intelligent direction by world class filmmakers; your Predators, Terminators and Total Recalls. The other group is the ludicrously camp action epics that are stunningly lacking in self-awareness and are little more than adolescent cartoons laced with huge explosions and gore to paper over the massive leaps in logic you are forced to swallow; Commando being the prime example.
Riding that line right down the middle sits The Running Man: a low tech movie with a high concept about a wrongly convicted political criminal forced to partake in a deadly game show to win his freedom which has lofty aims about being a biting satire about governments using television to run our lives and falls short mainly because it’s really fucking stupid.
Firstly, a quick history lesson: when buying the rights to the The Running Man (a 1982 novel by a little known author called Richard Bachman) the producers couldn’t work out why optioning the movie rights were so expensive considering that the guy who wrote it was a virtual unknown. It turned out that that virtual unknown was actually a pseudonym for a fairly well known scribbler called Stephen King; and now you know that we live in a reality where Arnold Schwarzenegger made a Stephen King adaptation and didn’t even know it.
The story, very much like Commando before it, is a prime exercise in video game plotting; once the film gets it’s exposition out of the way, Arnie can’t move onto the next scene until they’ve killed an end of level boss in the most gruesome way possible, while other characters are roped in and tacked on to add either a body count or a love interest depending on their gender. 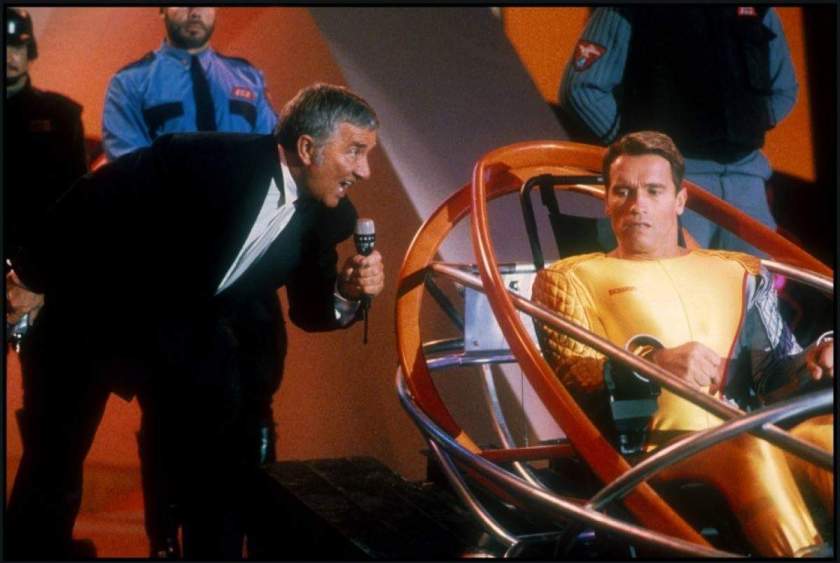 Even for an 80’s film, The Running Man is stunningly 80’s (a fact made even more amusing considering it’s set in the dystopian future of 2019) where spandex, aerobics and neon seem to be heavy fixtures of a world politically gone mad. In this world we’re introduced to The Running Man, the most successful television show in history were hapless prisoners fight their way through different game zones while avoiding a group of gaudily attired lunatics known as the Stalkers (think WWE wrestlers but even MORE psychotic) who try to kill them while a hysterical studio audience brays for blood. Recaptured after a bloody jail break, innocent man Ben Richards and his fellow escapees have to run the ultra-violent gauntlet in order to win his freedom while smug host Killian (actual game show host Richard Dawson enjoying playing the asshole immensely) hands out prizes and stirs the crowd into a frenzy. But while Richards simply wants to escape, his friends want to aid the resistance which, worryingly, is run by Mick Fleetwood from Fleetwood Mac. No seriously, it actually is.
Even though the satire here ultimately is as subtle and sharp as a bouncy castle, The Running Man is an immense, campy, stupid, old school, lark, cruising by on the huge charisma of it’s super-sized, Austrian mega star and it’s childishly irresponsible, yet VERY entertaining gore quota (all of which is played for ghoulish laughs, including a man being chainsawed in the dick complete with a soprano scream). The supporting cast, while not maybe on par with the slabs of meat on show in Predator or Commando, still shine with María Conchita Alonso somehow making the unflattering all in one spandex Running Man suit look rather fetching while Yaphet Koto doesn’t (sorry dude, it doesn’t do a thing for you). Plus any film that gives Jesse “The Body” Ventura screen time is alright with me.
The dialogue is obviously ludicrous and oddly not as sharp as Arnie’s usual action patter but every now and then some gold slips out like Killian’s amused and snappy response to the “I’ll be back” catchphrase or Schwarzenegger’s retort when Alonso threatens to throw up on a hideous Hawaiian number he’s wearing by deadpanning “Go ahead, it won’t show on this shirt.” 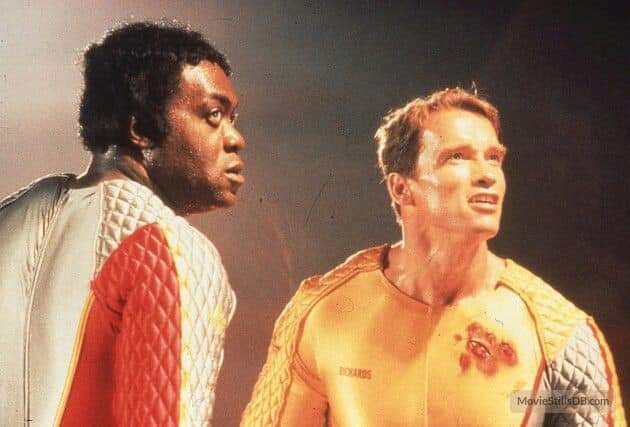 While it’s never going to be as dearly loved as some of it’s – shall we say – more well rounded peers (it’s budget restricted view of the future is about as high tech as Fred Flintstone’s car), it IS a highly entertaining serving of good old fashioned punch n’ crunch even if it under-achieves by using it’s very time-relevant concept purely to set up exploding neck collars and Jim Brown with a jetpack. But, much like it’s iconic lead, The Running Man is super solid, packs an impressive punch and looks surprisingly good in spandex.
🌟🌟🌟🌟