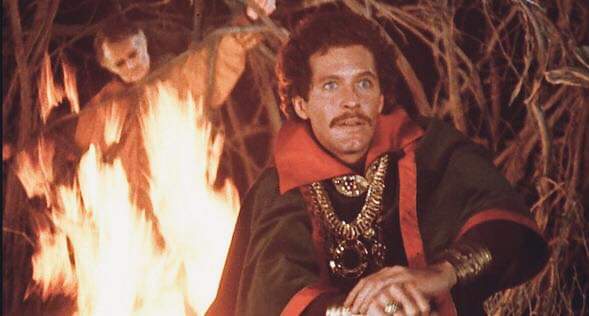 It’s easy to look at the comic book movies that came out between 1998 and 2008 that didn’t quite make the grade and mock their failures openly but compared to the shit people had to put up with in the 70’s, dreck like Blade: Trinity and Elektra play like fucking Heat when compared to their primitive and creaky ancestors. During this incredibly awkward period numerous heroes including Spider-Man, Hulk and Captain America were hurled at TV studios in order to generate pilots to rarely successful effect and churning out some jaw dropping awful results in return. Quite possibly the worst of these is Dr. Strange, a shockingly creaky, stunningly boring attempt to realise Stan Lee and Steve Ditko’s sorcerer supreme in the flesh. I say realise, but the film chooses to cast out a confusingly large chunks of important sections of the character’s origin story.
Gone is Strange’s previous employment of an egotistical surgeon and his subsequent, life altering car crash (an altercation that’s as pointless as having Peter Parker’s Uncle Ben merely wounded by that robber’s bullet) and it’s a clumsy hello to his new job as a hospital psychiatrist; but lets be honest, if you were having mental health problems would you really want to be studied by a man named Strange?!
Anyway, evil sorceress Morgan Le Fay (Jessica Walter aka Lucille Bluth from Arrested Development!!), who saunters about the place showing off her widows peak and voluminous cleavage, is sent by her interdimentional master (who looks upsettingly like a reptilian dildo and sounds like Tom Hardy’s Bane) to assassinate the current Sorcerer Supreme (John Mills desperate for a pay check). She almost achieves this by pushing him off a bridge (so much for magic, then) but he survives, although terribly weakened, and with his friend, Wong, searches for a man to become his successor.
That man appears to be Dr. Stephen Strange (a pathologically smug Peter Hooten), a psychiatrist who never met a woman he didn’t fling an inappropriate comment at, who may be the perfect replacement due to magical skills he inherited from his father. Caught in the middle of this supernatural tug of war is Clea Lake, a young woman who Morgan mind controls to do her evil bidding and who ends up a patient of the permanently and worryingly horny Dr. Strange. Fast tracking his studying to become the next Sorcerer Supreme in order to thwart Le Fay and save his patient, can Strange accomplish his destiny and not lose his licence for making advances on a patient under his care?

As you’ve probably guessed, Dr. Strange is an utter state, desperately slicing away all the things that make the character special in order to scrape through it’s obviously meagre budget. Hooton seems content to act almost entirely with his moustache (seriously, his face barely moves for the entire 94 minutes and he goes through whole scenes unblinking like a fucking psychopath) and the character’s troublesome libido seems to get much more of a work out than any of his spell casting – in fact all of the main cast seems to be perpetually going through heat. “Should I be asked to give up love?” Strange asks at one point, actually weighing up the options between saving all of reality or casually getting his end away.
The attempts to conjure up other dimensions wirh such a penny pinching bottom line result in efforts that echo a pre-teen amateur dramatics production of Lord Of The Rings, with the nightmarish, endless, mind destroying void of the Dark Dimension rendered by a moodily painted backdrop and some styrofoam rocks.
Good parts? I guess?… The film makes great pains to not make Wong the typical Asian man servant, instead casting him as a student and friend to the orginal Sorcerer Supreme and the score is appropriately trippy, although that may be because the film was made in ’78 and that’s just what music sounded like back then. Speaking of trippy, the awfully staged scenes of Strange travelling to other worlds via kaleidoscopic imagery straight out of John Lennon’s bong water actually benefits from it’s cheapness but we’re talking about 10 seconds in an hour and a half movie, so forget I said anything…

Cheap, stiff and impressively inaccurate (the DVD cover is photoshopped to make this bargin basement attempt look like the comic version) Dr. Strange 78′ proves that you don’t necessarily need drugs to go on a bad trip, sometimes a bad movie will suffice.
🌟