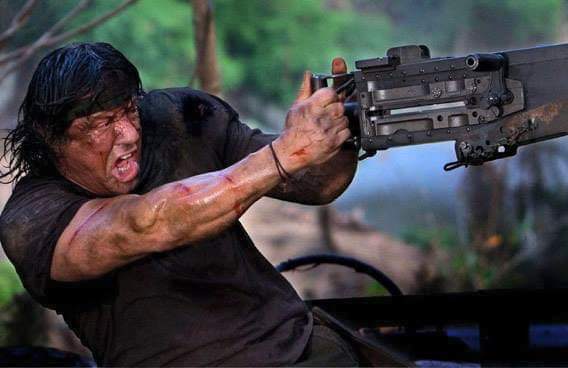 After an extended leave of absence, and thanks to the critical success of the immensely satisfying comeback of Rocky Balboa, Stallone’s OTHER iconic character returns to commit widespread death and destruction to any army that dares to trigger a political hotspot.
This time Stallone directs our attention to the Burmese War, the longest running civil war in our planet’s history, and brings us up to speed on the brutal conflict via a series of queasily real news reports and an early sequence where hapless villagers are forced to run a sadistic gauntlet of land mines before being gunned down by a local infantry unit.
Anyone who remembers the simplistic and somewhat indelicate way Rambo III handled the conflict in Afghanistan between the Russians and the Mujahideen might suck the breath in through their teeth at the thought of writer/director/star Stallone tackling something as messy as a 60 year plus civil war in which women are kidnapped for rape and children for soldiers. However, while the film certainly has a tang of naivety, it counteracts it by pouring on SO much grit and nastiness, it actually succeeds in it’s goal despite being one of the most harshest, unpalatable action movies ever made.
Now living somewhere on the Tibetan border and living the nomadic existence of a boatman and a snake catcher (big business in Tibet apparently), John Rambo is approached by Christian missionaries who want to sneak into Burma and help the Karen Rebels with their medical expertise. Our monosyllabic hero is doubtful but relents, cynical to their discussions about the injustices of war, especially when he murders the shit out of some murderous river pirates in order to protect them to their horror. Dropping them off in the unbelievably lethal war zone they are captured by the Burmese Army lead by the thoroughly evil Major Tint and are subjected to ridiculously inhumane treatment and eventually a member of their parish approaches Rambo for help. He’s to lead a rag tag group of mercs into the area in order for a rescue attempt and he agrees thanks to a brief bond he forged to one of the women in the group (a traumatised looking Julie Benz) and so off they trot into what may be certain death. The mercs (mostly forgettable save for a deliriously foul mouthed Graham Mctavish) want to bail at the first sign of trouble until Rambo starts getting those old muscles working again and slaughters an entire patrol the way most people swat flies while going on to appeal to the group’s sense of decency by aiming an arrow point blank at their face. So begins an insanely risky rescue attempt led by our bitter hero which sees him either glare silently at people with resting bastard face or obliterate people like he’s an old testament God with a migrane. 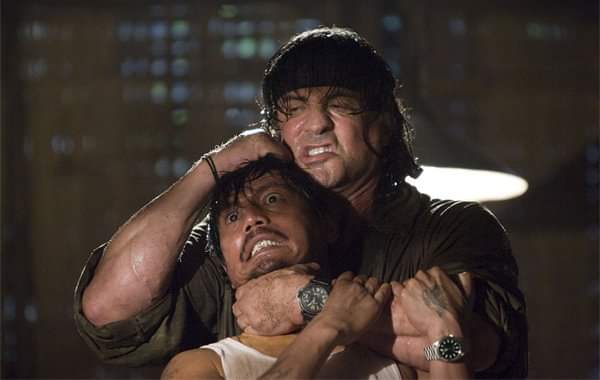 So… let’s get to that big, gore soaked elephant in the room adressed, shall we? Rambo is quite possibly the most violent American action movie ever made, with atrocities happening left, right and center with not a single punched pulled. While the sheer volume of the frenzied blood letting may seem insanely over the top (and there’s definitely a point to be made) Rambo actually adheres to a time old Hollywood tradition. There’s a saying in movie making that goes “if you’re gonna kill a man in the third act, have him slap a woman in the first”. Apologies for the terminology but what it essentially means is that the villain has to earn his death and considering the kind of death Rambo gives his enemies, that’s a hell of a lot of death to earn. And so of we go on a horrifically merciless ride where the Burmese army do progressively worse things to people while we wait for their “evil-meter” to reach the required amount for Stallone to wipe them off the face of the earth like a grizzled, mulleted hand if God. It’s tough viewing, not “fun” by any stretch of the imagination and the content scenes of rape, torture and child killing get to be quite harrowing but when our burly lead eventually springs into action it’s exhilarating in it’s brutality. Whether twanging numerous arrows into the brain-pans of torturers or ripping out the wind pipe of a would-be rapist with his bare hands, Stallone brings back the welcome weight of ugly violence from the original First Blood and the final fire-fight has to be witnessed to be believed as Rambo spits leaden death in every direction, literally turning his foes into human yoghurt from the business end of a jeep mounted M2 Browning machine gun. Heads pop like balloons, sniper bullets hurl bodies back 15 feet and limbs and gore sprays everywhere and while it may not be everyone’s cup of tea (might wanna deduct a star or two if you’re a tad squeamish there) it’s refreshing to see one action franchise that hasn’t gone the way of the PG-13/12A rating – admittedly hard to do when someone screams “Come and have a go at me you lady boy c*unt!” while having their gaping leg wound jabbed at with a stick.

Yes the film is heavily flawed. Yes it takes a while to get going. Yes, Rambo doesn’t actually do THAT much. And yes, the lion’s share of characters are annoying or fail to make an impact (to this day I’m still not sure who survives or not). But for single mindness of vision and an unrelenting dedication to keeping things stubbornly horrible, it’s quite the experience that I for one truly appreciated for all it’s savage brutality.
Proper (Ram)bo.
🌟🌟🌟