Over the last couple of years there’s been an impressive assault on the multiplexs by the Phoenix style resurgence of the killer shark movie. Finally throwing off the tiresome direct-to-DVD stigma that included the likes of Ghost Shark and Two-Headed Shark Attack, Hollywood money-men have actually started investing , with the likes of The Meg and others, into wide releases for movies that regularly contain the occasional feeding frenzy. Their scaley compatriots, the Alligators and Crocodiles, haven’t been quite so lucky with Lake Placid being the last time I remember watching a snappy lizard swallow a hapless bastard on the big screen.
Until now.

Having already taken a sizable crack at underwater people eaters with the colourfully camp Piranha 3D, director Aja Alexandre has returned to the animals amok thriller Crawl, a minimalist slice of croc shock that recalls the stripped down tension of 2016’s cracking Blake Lively vs shark flick The Shallows.
A category five storm is about to rock Floria like a hurricane (probably because it IS a hurricane) and so professional swimmer Hayley is racing back to her family home to check on Dave, her father who has been somewhat flaky since his divorce years earlier and hasn’t been in contact.
Ignoring the increasingly serious evacuation orders, she makes her way through rapidly flooding streets with the faithful family dog, Sugar, to search for her missing patriarch only to find him in the crawl space under their old house wounded and being stalked by some seriously hefty and dangerously ravenous Alligators. Desperately trying to save him
(in an act I guess you could technically call gator-aid…) she herself is wounded and cut off from the way out and so a potentially lethal game of cat and mouse ensues as the father and daughter reconnect while trying to out maneuver the bulky amphibians before the water levels rise too high.

The secret to what works with Crawl is it’s runtime, or lack thereof, as it runs at a super-lean 87 minutes – a film length practically unheard of in this time of mega-long blockbuster epics – it’s like the filmmakers realised that two people in a soggy basement with some skull crunching lizards just isn’t going to satisfyingly stretch to a full two hours and therefore dedicated themselves to putting out the shortest movie they possibly could. It pays off well though, as the post-it note sized plot would have started to drag like a gator’s belly on dry land if you were to add anything extra. The two leads, (Maze Runner’s Kaya Scodelario and Barry Pepper) give much needed weight to the paper thin premise with their father/daughter relationship working well in juxtaposition to random looters and police being torn apart like screaming rag dolls while they desperately try to escape.
Alexandre stages a decent thriller with his more than capable leads but there’s a feeling there’s a more aggressive movie that could have been. For example, I realize that what we’re watching is a movie and certain laws of realism don’t apply but the leads seem to have a physically resistance to injury that would make Wolverine pop his claws with envy.
Barry Pepper seems to fare remarkably well hobbling around the place repeatedly on a particularly nasty looking compound fracture; and no one’s wounds seem to bleed all that much or even slow them down for long. Hayley shrugs off wounds that by all right should’ve turned bits of her skeleton into fine sawdust and keeps on kicking but it’s not exactly the end of the world and only pulls you out of the film a little.
While Crawl, with it’s impressive pedigree (it also counts Sam Raimi as a producer), is a welcome return to bigger budgeted adventures for one of history’s greatest predators, it’s not the relentless sweat-inducer it’s obviously hoping to be. It’s not overly original either with the plot very similar to little-seen killer tiger movie Burning Bright with only the (very effective) hurricane setting and choice of flesh eater to set it apart. But as a fun flick virtually tailor made for a double bill with The Shallows it’s a very entertaining night out, it’s just not everything I’d expect from a team-up from such enthusiastic blood-sprayers like Alexandre and Raimi. 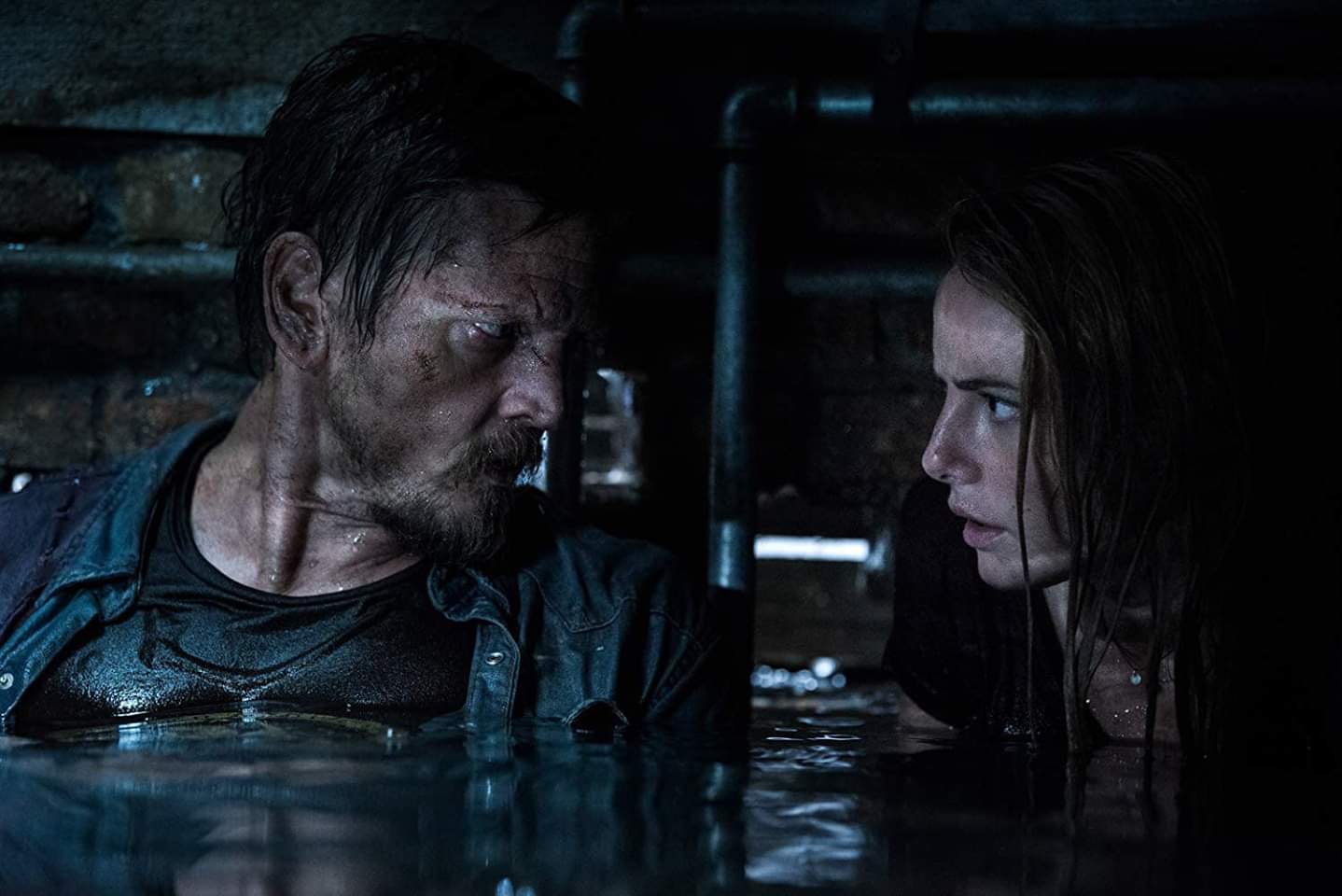