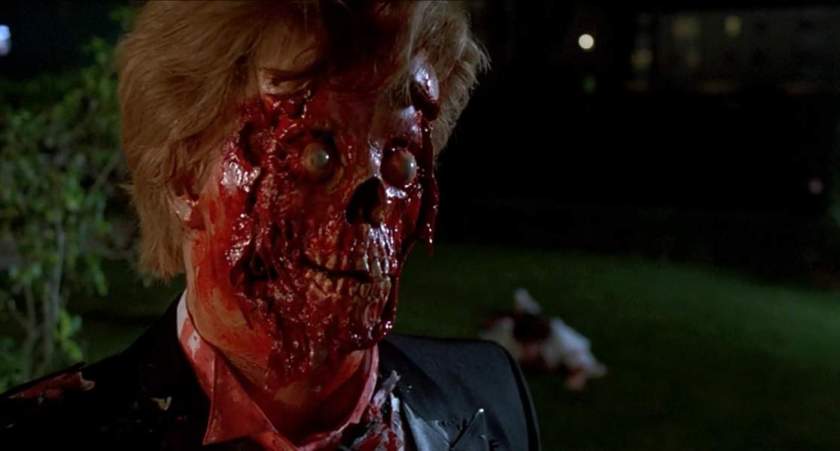 Good God, mash ups are fucking great, aren’t they?
Films that are crammed with multiple images from multiple genres, when done well, really can be one of the most purely fun experiences you can have with a cinema screen, especially if you’re in on the joke as much as the filmmakers are.
So image how I felt when I first plonked myself down in my teens and blindly crammed a rented copy of Fred Dekker’s 1986 zombie opus Night Of The Creeps into my VCR player. This movie had it all!
Aliens, zombies, parasites, college students, axe murderers, Tom fucking Atkins in one of his best loved roles: the awesomeness just kept coming and coming and I never wanted it to end. It genuinely felt like someone had reached into my skull like a brain filled cookie jar full of ideas, pulled an almost perfect cult script from the wish list located in my temporal lobe and then made it just for me, just to be nice!
Dekker, also the man responsible for that other mega 80’s, mash-up extravaganza; The Monster Squad – not to mention Robocop 3 (fuck it, they can’t ALL be gold…) has always had an eye for impressively mounted cultish thrills (he also partnered up with old school buddy Shane Black to script the bone headed but harmless The Predator) and Night Of The Creeps is where his sensibilities come across best by far.
We start – rather unconventionally, even for a zombie flick – on a massive alien space ship where a pug-faced, extra-terrestrial is on the run with a ominous looking canister. Dodging laser fire it blows it out the air lock where in true monster movie fashion it crash lands in small town America in 1959 and is (obviously) investigated by two high school sweethearts on a date. However, upon finding the intergalactic artifact, the couple’s date rapidly heads south when a slug-like creature leaps out of the canister and into the dudes mouth and an escaped lunatic from a nearby lunatic asylum axe murders the chick as she waits in the car.
Bounce forward to 1986 and university students Chris and J.C. are hardly big men on campus but in an attempt to catch the eye of impossibly cute sorority girl Cynthia, Chris convinces the very sceptical J.C. that they need to join a fraternity. Run by Cynthia’s boyfriend Brad (who I assume is acing a masters douchebaggery) the initiation to Beta Epsilon is to steal a body from the university medical center but, as luck would have it, the body they pick is the preserved body of the young man from the 50’s who carries a deadly alien parasite within his body. Waking up and spilling his icky load on campus (phrasing…), soon the place is infested with these oral fixated buggers whose life cycle consists of laying eggs in the brain of their victims which has the unfortunate side effect of turning their host into blank eyed zombies. Brought into this rapidly spiraling series of events is the astronomically cynical and possibly borderline suicidal Detective Cameron (my boy Atkins), a hard boiled cop with a chequered past whose Sahara dry sarcasm launched from under his take-no-bullshit moustache strips anyone to the bone dumb enough to be caught in his eye line.
Can the mismatched group of Chris, J.C., Cynthia and Cameron halt the rapidly rising epidemic before swarms of slug-brained zombies lay siege to the sorority house and fill there brains with things worse than negative feelings.
Night Of The Creeps benefits hugely from being way too smart to take itself seriously while simultaneously building up genuinely sweet and likeable characters to actually root for once the skulls start cracking and the space eels start wriggling. It helps that the three young leads are well written and are played by legitimately funny and rootable people which helps hugely pull the film through a couple of twists that actually carry a sizable emotional punch. However it’s craggy, dependable Atkins who steals the show in his Hawaiian shirt/Columbo coat combo and who delivers possibly his career best performance (it’s either this or Maniac Cop) as the wildly sardonic Cameron who utters possibly one of the greatest lines in B-movie cinema.
“The good news is your dates are here.” he barks to a group of stunned sorority girls who utter a wary “What’s the bad news?” in retort. “They’re dead!” is Cameron’s callow and supercool reply.

Dekker isn’t afraid to let his horror geek flag fly, not only naming most of his characters after his fright flick contemporaries (Carpenter, Cronenburg, Raimi) but also throws in an honest-to-God Dick Miller cameo. Dekker also knows his way around a cool horror movie image too with Chris and Cynthia, both in formal dress, wielding a shotgun and a flame thrower respectively, blasting and burning their way through a gang of skull splitting gouls being nothing short of a God damn vision of pure excellence; not to mention some of the hardcore cranial devastation that this film unloads on you at regular intervals ticks that gorehound box with a nice big splat.
A kickass teen gore comedy that really deserves to be brought up as frequently as other such horror-romps such as The Lost Boys NOTC is very, very smart about being very, very silly and has it’s own underground legacy to be proud of – the parasites from James Gunn’s Slither are essentially the same thing whereas Night’s wrigglers also hark back to the creatures from David Cronenberg’s Shivers.
A shining, yet underseen example of the type of everything-but-the-kitchen-sink style of movie that filmmakers seem to struggle with nowadays, Fred Dekker’s warm hearted yet blood splattered tribute to the sheer glorious fun of a well made B-movie is a genuine treat, both funny and exciting with an extra, odd layer of sweetness in amongst the blood and space worms. How often can you say that about a movie that features an undead axe murderer chopping it’s way up from it’s shallow grave into a bewildered old woman’s kitchen?

Give it a chance and Night Of The Creeps will burrow into your brain too… in a nice way.
🌟🌟🌟🌟