After muscling out the amusingly cheap and (not very) cheerful Captain America TV movie like a star spangled kidney stone, the producers must have somehow been quite chuffed with what they’d produced. They had to have been, after all how else can you explain – or excuse – the appearance of a sequel arriving on television screens IN THE SAME YEAR AS THE ORIGINAL.
That’s right, people: Captain America is back and this time he’s even more inaffective than before so buckle up for a mild ride where the action never starts!

Steve Rogers is still living the double life of a superhero. When he isn’t questionably sketching random old ladies to make a living (did I just kink-shame Captain America?) he’s suiting up in red, white and blue tights and a winged crash helmet that makes it look like he has gigantism of the skull to lay a badly choreographed right hook on any evil doers that would bring harm to his country. We see him demonstrate this by laying a trap for a gang of muggers who have been been stealing the social security checks of the elderly by using a pensioner as bait and then unconvincingly knocking him out with his awful, ultimate frisbee shield (no vibranium here, just nuthin’ but good old fashioned plastic). However interrupting Cap from making America safe by beating up one mugger at a time is General Miguel, a rogue revolutionary (whatever that means) who has kidnapped a wildly overacting scientist in order to develop a formula that with prematurely age anyone who comes in contact with it despite the fact that it would far be easier to simply steal any other kind of poison compund than inventing their own from scratch. Hiding in plain sight by posing as the warden of a penitentiary (?!?!?), the ruthless terrorist plans to fatally infect the population of a major city but not before sending a free sample to the president. 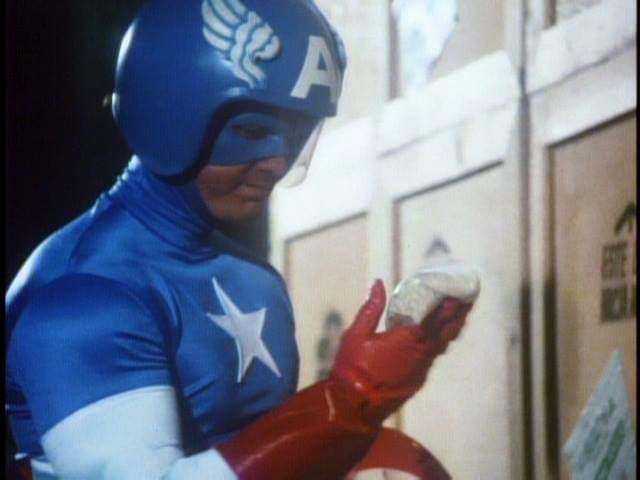 Can Captain America stop this conspiracy before Miguel finalizes his plan or will the fact that Rogers is fairly shit at his job mean thousands of innocent people be horribly aged to death?
Actually, aging to death is exactly the feeling you get watching Captain America 2: Death Too Soon (surely one of the all time worst movie subtitles in history) which somehow manages to be as bad, if not worse, than the original. Fear not, however, for if you have an abnormally high tolerance for pure shite the movie contains just as many unintentional guffaws as the original, especially when it comes to the action.
Watch the good Captain, cornered by five jeeps and a sniper, decide the only way to escape is to drive his bike off a dam and crash messily at the bottom, or a clumsy workyard brawl in which he causes numerous thugs to have various work place injuries that they’ll no doubt claim for once they get out jail.
The legendary Christopher Lee attempts to cling to as much dignity as he can while phoning in a performance of such heroic blandness you realise that his claim of being in over 100 movies doesn’t really impress as much when you accept that the lion’s share are most likely as good as this. Maybe this was Lee’s over complicated way of making the world a better place by using his long and varied career to teach us all a valuable lesson about quality over quantity; or maybe, just maybe, he had bills to pay. I guess we’ll never know now.
Returning Cap actor and professional slab of meat Reb Brown masterfully counters this by turning in a performance somehow even LESS nuanced that before and giving out all the warmth and humanity of a bowling ball. At one point while doing a life painting of a cat in the middle of a town square (in order to be inconspicuous, believe it or not) he pulls facial expressions that suggests he may not actually know what a cat is.
When we finally get to the climax the film doubles down on idiocy and ladles scene after scene of fever dream-level lunacy into your gawping face.
SHOCK as renowned super human Captain America is unable to wrestle a rapidly aging Christopher Lee into submission! GASP as grave faced actors give us attempts at dialogue like, “The people of Portland have aged about 10 months!” and truly except the audience to take it seriously! YELL WTF as scientists test a cure for the aging drug on infected twin BABIES by injecting one and then waiting for their ages to change!

Ironic chuckles abound with questionable moments lining up to be pointed and laughed at (the motorbike glider has to be seen to be believed..) Captain America 2: Death Too Soon isn’t good by any sensible stretch of the imagination, but it’s loaded with enough clunky charm to entertain trash lovers everywhere.
At least they got the boots right…
🌟