Any one who thought that Peter Jackson was ever a risk to make the Lord If The Rings trilogy obviously hasn’t seen Braindead (clumsily entitled Dead Alive in the US). Having made his name with the no budget, DIY gorefest Bad Taste and the sex and drug infused, nihilistic puppet comedy Meet The Feebles, Jackson made arguably the goriest movie ever made for his triumphant hat trick.
It’s 1950’s New Zealand and spineless mamas boy Lionel Cosgrove has fallen in love with Paquita, the Spanish girl who works at the local store much to his mother chagrin. You see Vera Cosgrove has a tyrannical streak and isn’t about to let some common shop girl come between her and her son, even if he is a grown man, but after a nasty bite at the zoo from a rare Sumatran rat monkey gets infected things rapidly go from bad to worse. As a virulent sickness takes hold and Vera’s very physical appearance starts to deteriorate during a meal with the head of the Wellington women’s institute, Lionel defiantly tries to stand by his beloved mother even as her behavior goes steadily to strange to outright bestial. Soon it becomes readily apparent that Vera has become a slathering zombie and trying to keep up the pretence that everything is fine gets ever more difficult, especially once she starts killing and infecting those around her. Soon Lionel has a small infected “family” stashed in his basement made up of a priest, the local nurse with a flip top head, a greaser and – most bizarrely of all – a zombie baby named Selwyn that was conceived after a bout of undead sex. To make matters even worse (if such a thing was possible) Lionel’s scumbag uncle Les has turned up looking to get his mitts on Vera’s money after her faked demise and insists on throwing a party in the house. Eventually the strain proves to be too much on poor Lionel and with Paquita’s help tries to euthanize his odd little collection of zombies; but after accidentally injecting the with animal stimulant instead of poison (don’t you hate it when that happens…) the turbo-charged corpses descend on the party and an epic bloodbath of biblical proportions unfolds.
Can Lionel and Paquita escape the viscera strewn chaos with both their love and limbs intact or will Vera manage to bring her boy back to the womb… literally. 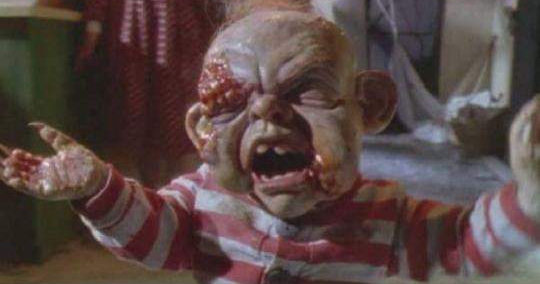 Braindead still stands as one of the greatest horror comedies ever made with enough boundless energy and innovation to fuel a dozen movies, fusing the manic energy of Sam Raimi with the surreal idiocy of Monty Python to create a staggeringly gory, utterly hysterical masterpiece.
What truly makes Braindead stand out (apart from it’s truly heroic level of grue) is the how intelligent and inventive the script is. Putting just as much attention into the non-zombie aspects of the story as it does into it’s super creative bloodletting (a blender, a light fixture and even a ceramic, wall mounted duck are deployed as suprisingly effective zombie stoppers), you really care about the central romance and you really root for the two leads as they try to hold back the undead hordes during the extended 40 minute climax that hurls a neverending procession of jaw dropping visual puns at the viewer at the rat-a-tat rate of machine gun fire.
How could you possibly hate a film where one of the reoccurring characters in the climax is a pile of sentient internal organs (lovingly dubbed “the gut puppet” on set), or a gut busting comedy highlight when Lionel decides to take the murderous baby Selwyn to the park only to have to beat him into submission while horrified mothers look on – “Hyperactive…” is Lionel’s lame explanation. How about Lionel’s mum getting over-embalmed at the funeral parlour or (possibly best yet) Jackson exercising his action muscles with a show-stopping, gonzo scene where a priest unleashes some kung-fu hurt on a trio of greaser zombies (“I kick arse for the Lord!”). But during all the insanity there’s an enduring down-to-earth feeling to proceedings that preempt the kind of homegrown humour that Ardmaan became known for. For example, in the jungle set prologue, after an uzi waving zoo official is scratched by the diseased rat-monkey, he babbles on about there being some Dettol in the jeep as his panicked guides prepare to chop him up to stop the infection.
The performances fit perfectly into the tone of the film with the amusingly vile Uncle Les standing out with every repugnant leer but it’s Tim Balme as Lionel who holds everything together, as capable with a prat fall as he is wielding a haemoglobin spraying lawnmower.
Huge props also have to go out to Weta effects co-ordinator and frequent Jackson collaborator Richard Taylor for the frankly stupendous workload of make up, puppets and creature suits that make up the guts of this splat-stick spectacular which, for sheer scale, has never been equalled.

Not counting his highly underappreciated ghost comedy, The Frighteners, it’s a crying shame that Jackson hasn’t dipped his toe back in the world of goofy horror but hope springs eternal and you never know. If Sam Raimi could venture back to make Drag Me To Hell after helming his Spider-Man trilogy then maybe it’s not entirely far fetched to hope that one day the New Zealand auteur will go back to hurling vast amounts of fake blood around a film set.
🌟🌟🌟🌟🌟