Inferior sequels are legion in and around the mean streets of the genre of 80’s horror and the belated follow up to George A. Romero and Stephen King’s spectacularly camp 1982 anthology is sadly no different. And yet, cheesy nuggets of gold exist in them thar hills that is still worth a gander for the less discerning horror addict looking for either a King fix or a straight shot of goofy fun.
Sporting a mere three stories instead of the original’s five and featuring a script by Romero (sadly not on directing duties) based on some of the prolific author’s short stories, Creepshow underachieves somewhat almost on every front and misses the first movie’s comic book tone by a clear mile and yet delivers just enough ghoulish giggles to still be memorable enough.

After an animated wraparound that routinely tests the patience between stories, we dive into our first tale, the rather basic Old Chief Wood’n Head, where a kindly old store owner (George Kennedy) and his wife have their store robbed by the ungrateful nephew of the chief of the local tribe of Native Americans. After the robbery goes bad and the oldies get a fatal dose of lead from the business end of a shotgun, the wooden Chief that stands on the front porch magically comes to life in order to claim a blood streaked revenge on the murderous gang (although maybe if the old chief had thought to come to life DURING the robbery maybe he could’ve spared us all the palaver…).
The second – and most notorious story – is The Raft in which a typical foursome of empty headed (and questionably aged) teens on a day out are menaced by an acidic, predatory oil slick (that looks like a gigantic submerged garbage bag) that strands them on a raft in the middle of the lake. As it gradually consumes them one at a time with no hope of rescue coming, the survivors weigh up whether or not they can possibly out swim this gelatinous horror to shore.
The final segment, The Hitchhiker, sees one time Bond girl Lois Chiles (Moonraker, if you were wondering) as an upper class woman who, on the way home from an affair, unwittingly plows into a poor guy thumbing a ride and who subsequently steps on the gas and gets the fuck out of dodge before anyone sees. However, the enraged spirit of the young man comes back as an unkillable, bloody wraith to take revenge and the woman and her rapidly disintegrating brand new car are locked in a gruesome battle to the death as she resorts to anything she can to turn this vengeful corpse, who only repeats the phrase “Thanks for the ride, lady!”, into a torn pile of gore-soaked rags. 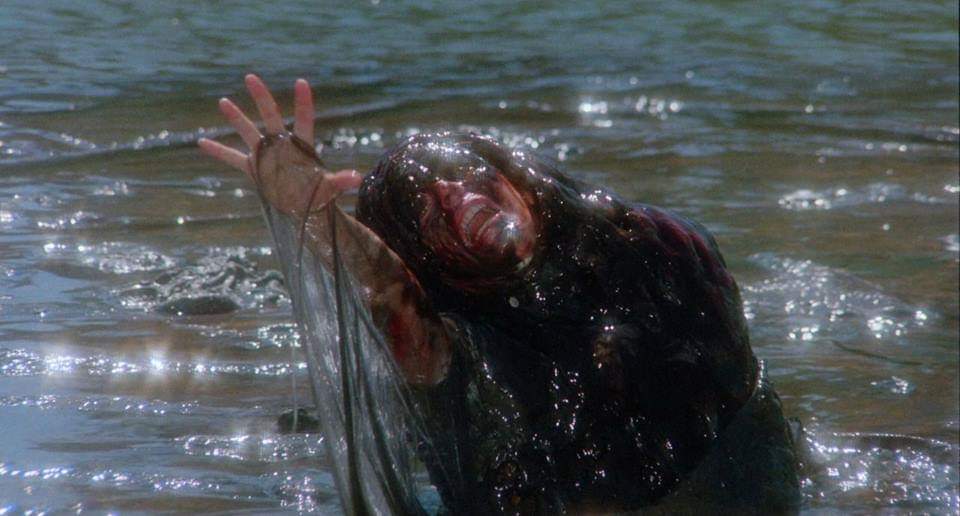 It’s fair to say that Creepshow 2 is the epitome of a mixed bag, with the quality and tone wildly varying from story to story. The first of the trilogy of tales is somewhat bland, a vanilla tale of supernatural revenge that’s given a racially confusing makeover – the phenomenon of the carved “Indian” chief was usually employed by stores to advertise cigars so the concept that one would come to life to reclaim stolen Native American jewelry is, at best, naively troublesome – but some decent kills and some solid performances (including an alarmingly young and thin Holt McCallany from Mindhunters) keep it ticking along.
The Raft, in comparison, should really be considered as easily the worst of the three stories due to the impressively atrocious performances, dodgy monster effects and lapses in logic so huge you jackknife a crane through them and yet it’s the sheer idiocy that makes it so absurdly memorable. Why would the teens bicker about swimming all the way back to the car when the shore to their direct left seems way closer, why would a character feel the need to stick their hand in an oil slick even if it WASN’T eating people and why the hell does the lead feel the need to lay some seriously disturbing moves on a sleeping girl when two of their friends have already been melted into soggy mulch? I don’t remember the original short story being this dumb but the confusing stupidity ultimately ends up being perversely entertaining and the goopy melting effects makes it feel like a weird, aquatic, low rent cousin of The Blob. However, in a last minute save worthy of a winning goal in overtime, the final story, guns the throttle and takes the movie across the finishing line with style finally capturing the brutally wacky energy of “The Crate” or “They’re Creeping Up On You” from the original but also harnessing the spiteful imagination of King with a great paranoid, central performance by Chiles and lashing of gooey gore as the titular thumb waver is gradually turned into bug-eyed mince meat by continued vehicular assault. In fact, The Hitchhiker is so much fun it single handedly pulls Creepshow 2 out of it’s nosedive and makes the whole affair worthwhile but hardly essential. Even the appearance of FX legend Tom Savini, dubbed and encased in a metric ton of latex as cackling storyteller, The Creep, can make the movie more than an 80’s curiosity. 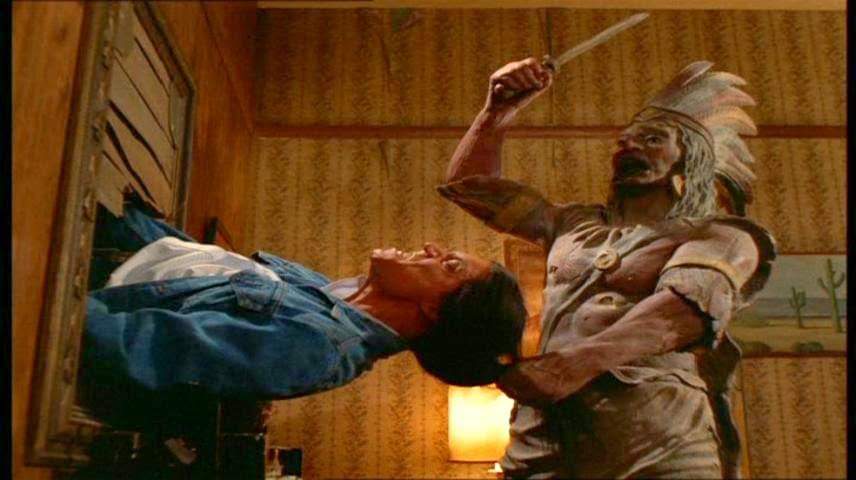