And so finally (and some would say mercifully) we come to the final film in Roger Moore’s impressive seven film run as 007 – licence to kill: Jimmy Bond. It had been a bumpy ride, to be sure; we’d had the dizzying highs of Live And Let Die and The Spy Who Loved Me and the befuddling lows of Moonraker and Octopussy but for the man who himself suggested that he maybe played Bond a couple of times too many (a couple, Roger?), it was the end of the road.
Bond finds himself investigating microchip industrialist Max Zorrin, whom MI5 suspects is in bed with the Soviets and the spy manages to infiltrate his empire via the villain’s love for breeding race horses. Narrowly avoiding assassination attempts from Zorrin and his right hand woman May Day, Bond travels from France and a tangle at the top of the Eiffel Tower to San Francisco and a tangle at the top of the Golden Gate Bridge (AVTAK is big on monuments). Teaming up with geologist Stacey Sutton (hobbies include wearing criminally short dressing gowns, screaming for help a lot and being unaware of being stalked by zeppelin), 007 strives to thwart a plot to destroy Silicon Valley involving detonating the San Andreas fault.
To be quite honest, I’ve quite a soft spot for this 14th entry in a string of movies that is, to date, still going strong, and it’s probably from the fact that the film mercifully chooses to dial down on the overtly goofy humour that some of the films had become criticised for. The usual, dependable factors are all still in effect here, composer John Barry and the overworked stunt team put in quality work as the usual eye popping visuals come thick and fast which include a legitimately impressive base jump from the top of the Eiffel Tower, a car chase where Bond’s vehicle is rapidly and progressively deconstructed during pursuit and a fun skiing section that has a novel use for the Beach Boys back catalogue. 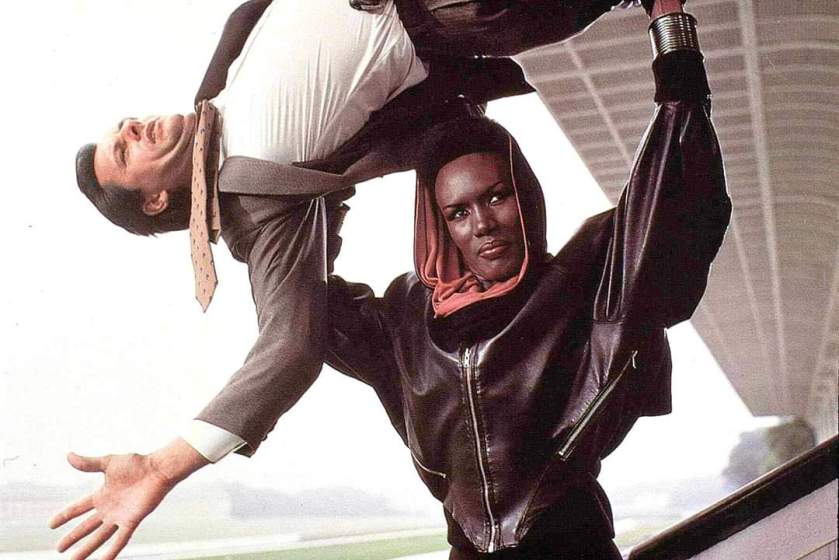 Numerous factors help make A View To A Kill a vague return to form for the series, the first being a marked effort to bring some aspects of the franchise into the 20th century such as recruiting pop group Duran Duran to record the stirring theme song. Also, the film avoids the usual habit of casting an older, European character actor in the traditional role as villain and instead enlists the wonderfully strange demi-God of cinematic weird, Christopher Walken. His trademark, disinterested, lizard-like delivery makes for a memorable villain and the truly perlexing sight of him trying to brain the 58 year old Moore with an axe on the top of the Golden Gate Bridge is an indelible Bondian image I’ve always oddly savored (in fact, his stupified chuckle moments before his inevitable demise is so unbelievably Walken, it hurts). Similarly the strikingly statuesque form of Grace Jones (who definitely puts the “hench” in henchwoman”) as May Day is also a major plus as with her sculpted hair, feral snarl and the ability to bench press KGB agents over her head, she visually is quite unlike anything the franchise has seen before (although the provocative artist and Sir Roger famously got on as well as a mongoose and a cobra forced to flat share for a reality TV show), although her last minute shift of allegiance doesn’t ring particularly true.
Admittedly, all this embracing of modern 80’s culture in a series that was, at that point, over 20 years old doesn’t do the aged Sir Roger Moore any favors (in some more strenuous scenes the texture and colour of his skin starts to resemble corned beef) but in his defence, he remained in the role for one last time due to the finalizing of hiring his successor falling through. Imagine A View To A Kill featuring Timothy Dalton or Pierce Brosnan instead and everything starts to make a lot more sense. However, the hiring of ex-John Steed, Patrick McKnee proves to a sweetly savvy choice as he and fellow “old schooler” Moore spark an enjoyable double act that’s cut far too shot – but then, that’s life for a Bond sidekick I suppose…
This is as probably as good a time as any to address the tenure of “Sir Rog” in general and even though I’ve given him a fair amount of stick over some past reviews, there’s no changing the fact that he kept the character alive throughout the 70’s and most of the 80’s and his impressive seven film run was only equaled by Connery thanks to the existence of rival “unofficial” Bond film Never Say Never Again. Regardless of accusations and complaints (mostly by me) of his movies frequently being too jokey, the fact remains that he was the Bond I, and many others of my generation grew up with, and therefore has earned a huge amount of respect despite his many curious foibles in the role (like his upsetting kissing method for example, where he seems to try to absorb the other participant’s mouth with his own like the alien from The Thing, or that bizarre little “OOOP!” noise he made every time he took a punch to the stomach).
Despite carrying it’s fair share of faults (a weak female lead and a run time that sports it’s fair share of extra weight), A View To A Kill may not be quite the majestic send off Moore enthusiasts were hoping but it’s certainly a fair sight better than Octopussy and it’s a good example at how slick the Bond production line had truly become while banging out continuous adventures much in the way Marvel Studios does now.

The end of an era and a torch passing as seismic as cinema gets, Moore may have been merrier, but his time really was up. Over to you, Mr. Dalton…
🌟🌟🌟