As inevitable as the the ebb and flow of the tide or the inexorable march of the seasons, sooner or later time catches up with whomever is currently inhabiting the shoes of cinemas premier gentleman spy. There are two ways to tell if the tenure of said actor is nigh and the first is relatively simple: check the jawline of the actor anywhere between the chin to just under the ear and if that line is starting to become ill defined, it’s time to start casting. The second is even simpler: they start making utter tosh like Die Another Day….
In a classic example of good news/bad news, Brosnan’s jaw line is still looking kinda strong but his last go round as James Bond sadly isn’t. Invoked into being to coincide with Bond’s 40th anniversary, Die Another Day tries to graft vast amounts of fan service, in-jokes and a more jokey kind of tone onto a story that starts off with somewhat of an intriguing premise and then slam-dunks it into the nearest bin in favour of sword fights, invisible cars and Moneypenny abusing company equipment in order to indulge in some virtual sex that creep so close to the farcical adventures of a lesser Roger Moore entry, you can feel yourself break out into a cold sweat in anticipation of a double taking pigeon.

After an assassination attempt in North Korea goes horribly awry, Bond finds himself being held captive and being tortured for fourteen months until he’s released in a prisoner exchange. Assuming he’s being rescued for positive reasons, Bond – sporting the hair and beard combo of a 70’s Bee Gee – is dismayed to learn that he was only freed because it was believed he was hemorrhaging classified information along with a fair bit of haemoglobin. Figuring out that there must be a double agent in the ranks of MI6, James escapes and tracks down Zao, the man he was traded for, in order to find out what’s going on and eventually finds himself on a trail that leads past fetching but lethal NSA agent Jinx to diamond fueled billionaire Gustav Graves.
Visiting his ice palace in Iceland where he’s unveiling a new satellite that will help crop growth, Bond discovers his foe is not all that he seems and that the mole in MI6 may also be closer than he thinks.
Straight off the bat, as we witness Bond and some other agents sneak into North Korea while stealth surf boarding, we know we’re in trouble, which is a shame as the quickly dropped sub plot of the torture Bond endures is far more fascinating then anything that follows. In fact the whole credits sequence ingeniously plays as part of the plot as the agent weathers frequent beatings and scorpion venom (plus it accidentally and amusingly plays like he’s also being brutalized by Madonna’s awful title song which is surely is a case for Amnesty International) but the second he casually strides out of a high security MI6 installation barefoot and clad in a pair of pyjamas, any drama caused by the situation goes out the window with it.

Director Lee Tamahori is no stranger to mixing broad characters with gritty drama having made the memorable Once Were Warriors but here he seems dead set on trying to “update” Bond by being unnecessarily unsubtle. For example, were we all clambering to finally get a scene where we witness Bond actually has sex with someone? We even focus on his face as he “finishes” instead of the usual, dependable cutaway the franchise had been relying on for the last 40 years. Don’t get me wrong, I’m not prudish, but we don’t need to see Bond bone anymore than we do Batman or Han Solo. Another addition Tamahori crowbars in is the use of more CGI, which in general isn’t exactly a negative thing if used intelligently or sparingly but here it’s used to replace stuntmen in visual effects so bad you can’t help but have a visceral reaction that equates to an emotional dry heave. A scene where Jinx does a backward skydive off a cliff and another where Bond parasails over an iceberg strewn tidal wave are so poorly rendered they both look like the life threatening stunts were performed by stiff limbed Barbie dolls.
Brosnan holds up well in his final outing despite his increasingly distracting pronunciation of the word mojito and newcomer Rosamund Pike stands out as undercover agent Frost, hinting at an impressive career to come and even Toby Stephens give top notch sneer as villain Gustav Graves, pushing out every line past a permanently cocked upper lip but even he can’t pull off an armoured suit that looks like someone designed a tank top for Robocop…
On the flip side, Madonna punishes us for our accumulated sins with possibly one of the worst cameos in all of recorded human history while Halle Berry is obviously having fun as slinky agent Jinx but ultimately feels a bit out of place but not as much as Michael Madsen who simply looks like he’d rather be in a bar, or bed, or ANYWHERE compared to here.
A fair few ludicrous but original Bondian images are dotted about the film that peak the interest with Rick Yune’s diamond scared henchman Yao being a fairly cool concept, but Tamahori beats every new idea about the face and neck with relentless homages and past references to far more memorable moments without thinking to focus on making many new ones. So Berry emerges from the surf like Ursula Andress and Q’s lab is crammed full of old gadgets (although why anyone would want to keep his crocodile submarine from Octopussy is anyones guess) and it’s as if the film keeps insisting on nudging you in the ribs as if to say “Huh? Get it?” without stopping to think how annoying it is.
The action is predictably slick but strangely soulless although an absurdly overblown swordfight based wager between Bond and Graves, while completely outlandish, even for a Bond film, is certainly different from a boring old card game. Similarly, a glacier set duel between two tricked out cars (so laden with gadgets, you openly wonder how on earth they still managed to fit engines in) looks appropriately dangerous and manages to rouse interest but the finale turns out to be clumsy, mishandled guff with electrocuting body armour, a crashing plane that takes ages to actually crash and the worst CGI helicopter you’ve ever seen proves to make Pierce’s send off easily the worst of his four.
In fact the critical drubbing the film took may have directly lead to the complete overhaul that took place a mere four years later with a completely new Bond and outlook. While such a reboot was obviously necessary (those who doubt this, just go back and watch Madonna’s cameo again – I’ll wait) it’s a shame Brosnan wasn’t given a more dignified exit considering that it was his Bond who rebirthed the character for a whole new generation. But unfortunately Die Another Day led to Try Another Day-Job and it was time for the unkillable character to move onto his next form. 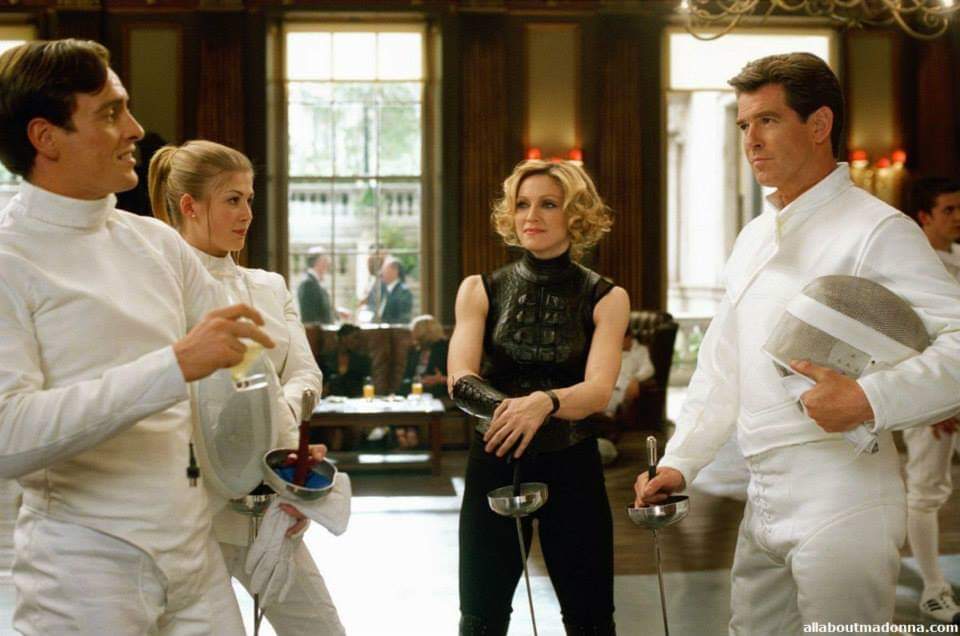 One mercifully free of a fucking invisible car.
🌟🌟