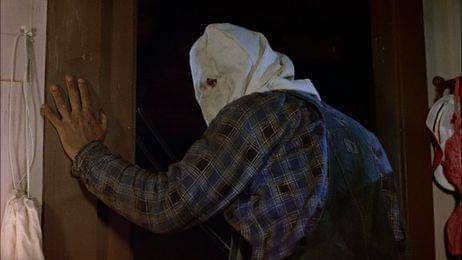 What do you you do when your cash-in slasher rip-off strikes oil and makes a literal killing at the box office? Why you load up a crew, knock up some fake blood and head back into camp to make another one of course!
Realising they’d hit a plump, rich vein that would unleash an arterial spray of dead presidents, the studio fast tracked a part two into cinemas so quickly you’d suspect they were scared that if they waited any longer, audiences might have seen through the gossamer thin veil that revealed the movies to be not much more than a tawdry Halloween do over.
Opening, as many slasher sequels went on to do, with about five full minutes of flashback footage from the original to set the mood (not to mention including Tom Savini’s gnarly beheading effect of Mrs Voorhees – a decap recap if you will…) and the systematic (and unnecessary) extermination of the first film’s plucky lead, we jump ahead 5 years (!) and are introduced to a new group of teens who turn up for camp counselor training camp held just down the road from Camp Crystal Lake – aka Camp Blood. Before you can process the fact that these kids are essentially going to camp to learn how to camp – we are ask to care about this new gaggle of walking blood bags who’s entire personalities are made up of a single character trope. Ladies and gentlemen, meet Horny Couple, Preppy Kid, Stuck Up Hot Chick, Shy Girl, Jokey Guy plus others as we watch them go about the usual horny teen antics and indulging in questionable seduction techniques and random nudity while a steady cam watches them from the woods. Yep, it seems that Mrs Voorhees’ baby boy is all grown up and carrying on the family trade of wholesale slaughter while loping around the woods with a burlap sack on his misshapen noggin and when he’s not using spears and hammers to helpfully shunt nubile adolescents into the afterlife he’s worshiping the severed head of his mum in a makeshift shrine in his trendy bachelor shack. As the life expectancy of anyone still at the camp reaches critical mass, can the “final girl” (in this case a resourceful woman named Ginny) survive and avoid becoming Jason’s latest tribute?
Ok, so we’re not talking art here, but as generic teen choppers go, Friday The 13th Part 2 is somewhere in the middle ground of that much maligned sub-genre, the slasher movie. It’s not that it’s particularly a better or worse constructed experience than it’s predecessor – in fact it actually improves on the original in a couple of ways – but there’s absolutely no way to get past the fact that it’s essentially THE EXACT SAME MOVIE, virtually matching the first film’s story beat for beat while featuring identical stock characters. However, as I said, improvements have been made. For a start, the decision to drop any semblance of a whodunit is a wise one (can you even call the first film a whodunit if it only introduces the killer 5 minutes before they’re revealed?) and making the murderer Mrs Voorhees vengeful son, Jason, turns out to be a historic one despite making not a single iota of sense in the slightest. Wasn’t the original jump ending only a dream? If Jason never actually drowned at the age of 11 why didn’t he go home to his mother and how old is he supposed to be when his mother’s head spectacularly left her shoulders 36? That’s 25 years worth of mothers day he’s been missing while wandering in the woods, that sound like a dutiful son to you? And this isn’t even accounting the apparent 5 year gap between movies. 5 YEARS? What’s Jason been DOING out there? 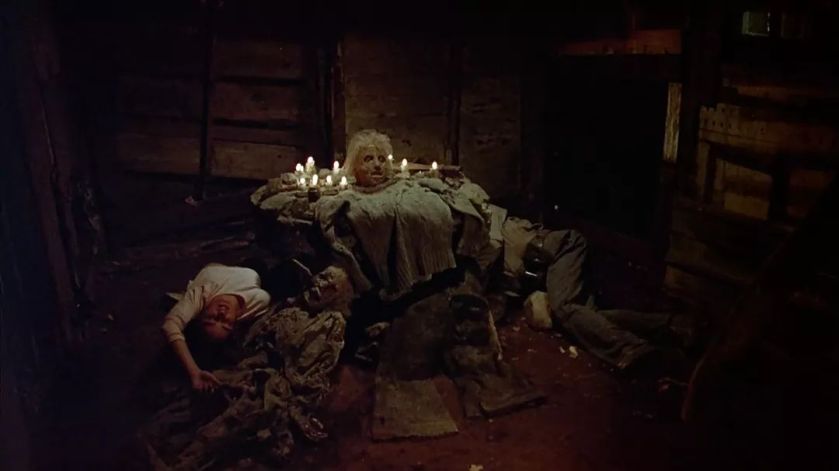 And while we’re on the subject, are we truly being expected to believe that a bag-headed, mongoloid serial killer who grew up alone in the woods could track down his mother’s killer in a local town and NOT be spotted despite sporting a skull the size of a melon and a visage that makes Sloth from the Goonies look like a cover model for Calvin Klein?
Of course I’m obviously expecting way too much subtlety from a movie whose opening title literally explodes to reveal the words Part 2 but the final extended chase sequence is tighter and less farcical that the first movie with some noticeably above average beats amongst the thing you’d find in a standard slasher movie climatic chase (Ginny’s hiding place being given away by an unfortunately timed squirt of urine is spitefully memorable), director Steve Miner (who went on to direct Halloween H20 and Lake Placid) manages to strengthen and simplify what passes for a plot and streamlines an already thin concept into a lean and neat ninety minutes.
Of course the true selling point here is the various spikey deaths littering the runtime and while obviously detailing the kills of a slasher movie in a review may well be horribly spoilerish and violates everything in the critics code (not a real thing) but as I’ve got a quota of 900 words to fill and not exactly a lot to play with, I’m gonna dive right in and F13 Part 2 has a perfectly decent string of slaughter sequences with a couple of standouts. For example, belly-laughing in stunned belief as a wheelchair bound character (one of the few to actually stand out thanks to some suprisingly progressive character work) catches a machete full in the face only for his chair to roll down a flight of stairs may not exactly be PC, but then being PC isn’t famously high on the slasher genre’s agenda and similarly a scene where a Jason scores a tremendous two-for-one deal while impaling a couple with a spear DURING coitus is cracking – even if it’s a blatant steal from Mario Bava’s classic A Bay Of Blood.
For the uninitiated out there who are still confused as to how this franchise sits in such high regard with horror fans despite lacking the “class” of your Halloween’s and Nightmare On Elm Street’s (two movies whose virtually flawless first installments set the standard for their subsequent sequels), the answer starts here with the gradual evolving of each and every movie that came dowm the pipe. Switching out a vengeful, middle aged, jumper wearing matriarch for a hulking, sack-headed mountain man (it’s tough to fear a man in dungarees and plaid – but the film just about pulls it off) who worships her disembodied skull keeps things feeling way more fresh than it has any right to and it’s this slight shifting of the status quo that managed to keep this unkillable franchise ticking on for decades later. 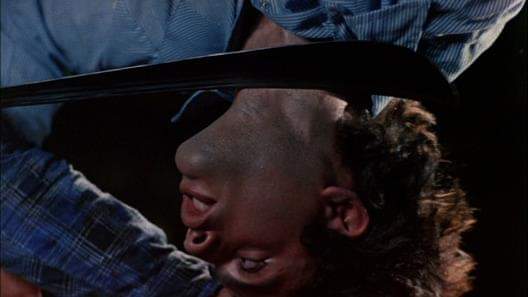 For fans of the series, and indeed the genre, this Part 2 is well worth a stab…