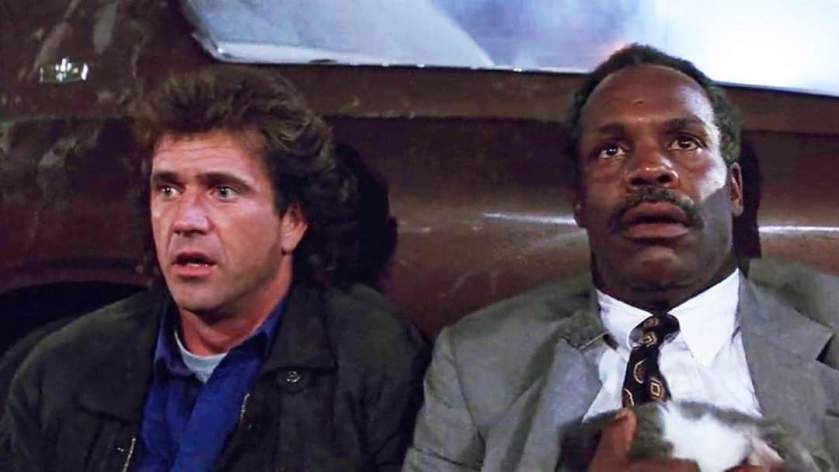 When you find yourself in the position of being a bankable director who has a legitimate franchise to fall back on seemingly whenever you need it, what would you do?
Well if you’re Richard Donner, I’m assuming you’d use it to boost the dollar count in your retirement fund – after all, how else would you explain the stunning lack of impact Lethal Weapon 3 has had on action cinema in general despite the fact it was directed by the man who crafted such flawless cinematic game changers like Superman: The Movie and The Omen?
Making this cultural non-event even more baffling is the fact that it seems EVERYONE has returned for this third go round, everyone from the actors to the behind the scene guys (I’ve no idea if the caterers returned but I’d be willing to stake cash money on it being accurate) but to no discernable positive effect despite the movie boasting a massively huge scale.
As if to prove how big the movie actually is, we join our resident loose cannons Riggs and Murtaugh as the former desides on a whim to attempt to defuse an explosive device despite the latter’s reasonable pleas for him to wait for the bomb squad. It comes as a shock to precisely no one (including Riggs it seems) when the bomb blows and we get to watch a whole actual building collapse in a legitimately impressive example of big budget Hollywood dick swinging. Stunningly, NO ONE loses their jobs but Riggs and Murtaugh are busted back down to uniform duties despite a supremely pissed Murtaugh being one week away from finally retiring, however barely one day into their “punishment” and they’re foiling an armored car robbery with Riggs clinging out of the back of the thing while it hurtles down the freeway. This kicks off an extremely convoluted series of events (even for a buddy cop action movie that zips from one set piece to the next while still finding time to throw endless skits at us that concern Murtaugh trying to sell his house and avoid the advances of a horny security guard. Riggs on the other hand gets to kick off a love/hate relationship with sarcastic, tough as nails internal affairs agent Lorna Cole which eventually sparks into romance while getting into more outlandish scrapes that more often than not has him flung around like a wild-eyed rag doll.

However when an influx of illegal weapons causes Murtaugh to shoot an armed young man who happened to once be a friend of his son’s, the gang strive to stop the stream of firepower from reaching the streets by… well, shooting people. Go figure…
Lethal Weapon 3 is somewhat of a cinematic oxymoron as the whole film is ridiculously polished with huge action and copious banter between the two leads who by now slip into their frantic back and forth as easily as a pair of cozy slippers.
However you usually only pop on slippers whenever you want to relax and figuratively take your foot off the gas and that’s the rather concerning problem we find ourselves with here – an action film with a noticable lack of momentum.
The plot takes forever to get going and concerns… gun running I think? Something about crooked cops? I only watched the bloody thing a day or so ago and actually made notes while I watched it and it’s already left my memory which sorta makes Lethal Weapon 3 the cinematic equivalent of rohypnol.
Seemingly more interested in “amusing” side plots such as Riggs chowing down on dog biscuits in order to quit smoking, Roger taking to wearing a girdle due to his advanced age and the teeth clenching return of Joe Pesci’s hyper-verbal Leo Getz, the film has utterly no drive and is completely forgettable.
In fact one of the only scenes that makes any impact whatsoever is the “courting” of Riggs and Lorna where they show off their scars from years of police work but even that’s a riff on the scene from Jaws (although admittedly Hooper and Quint didn’t make out at the end of their contest) but the endless slog makes the 118 minute runtime feel conservatively like three weeks.
A bit where Riggs gives chase to a rail mounted truck by clinging onto and wildly firing from the front of a subway train is impressive, as is Riggs giving further chase on a commandeered police motorcycle (all the while Danny Glover stands on the sidelines and yells) is also noteworthy and the flaming climax contains more than it’s fair share of shoot carnage but it ultimately ends up being a bunch of loud noises interspersed with a lot of dead air. Like a room of farts…
Of the cast, Gibson comes of best here, still having fun with the character even though he still getting progressively further away from the unstable officer who once kept a special bullet in case he wanted to end it all and now is less a psycho with a death wish and more an interfering prick who casually puts other people’s lives in danger because he fancies a bit of a laugh. Glover, on the other hand is getting noticably less to do in every subsequent film aside from gamely bringing up the rear or bellowing “HEY, RIGGS!” literally every time Gibson does ANYTHING (seriously, check it out – every time, I swear). Vanilla villain Stuart Wilson is so unmemorable I’d swear the reason he stays one step ahead of our heroes for so long is because I reckon they’ve forgotten he even exists and the actor fares far better in Martin Campbell’s Mask Of Zorro than he does here. The less said about Joe Pesci the better (I truly loathe the character) but a rare bright point is Rene Russo as the romantic lead who’s chemistry with Gibbo pumps some much needed life into the bland proceedings.

But for the most part, there’s little point in being a Lethal Weapon if what you’re firing is nothing but blanks…
🌟🌟