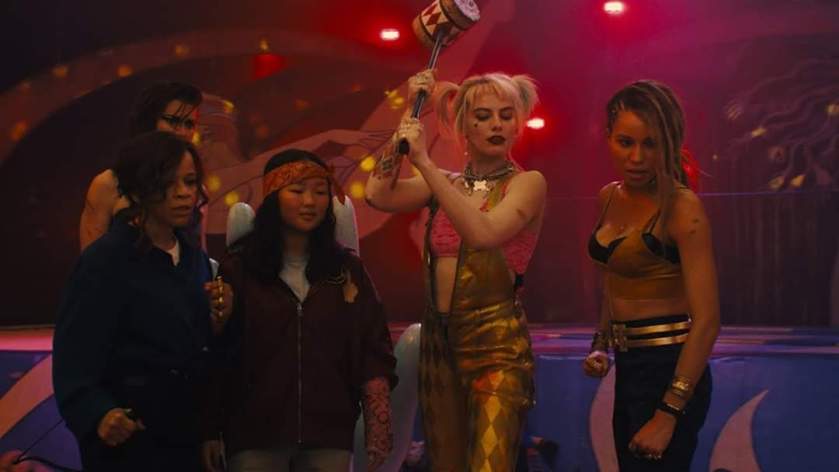 Hoping to simultaneously dilute the headache inducing stink that was Suicide Squad and keep DC’s recent (and overdue) hot streak going, Birds Of Prey has some pretty sizable quotas to meet. Seemingly yet another target to bullseye is the addressing of the matter that the superhero biz is still fairly a male dominated industry despite all the leaps and bounds made over recent years.
Well, in a year that will also contain a Wonder Woman sequel and the long awaited Black Widow solo movie, the female centred comic book flick is off to good, if incredibly uneven start with this pseudo sequel to Quinn’s first appearance.
After her latest escape from whatever maximum security shithole she was languishing in last time we saw her, Harley Quinn – a gaudy, deranged supervillain – has been dumped by her famously psychotic paramour, The Joker. Working through her crippling depression the only way she knows how, vast amounts of alcohol and property damage in equal measures, Harley vainly tries to keep the breakup a secret knowing full well that any protection she has from a city-full of disgruntled criminal has all but disappeared.
While Harley devours ice cream with her pet hyena, a major play for the city is being enacted by Roman Sionis (aka Black Mask), a wildly flamboyant lunatic with a fondness for valour that rivals Zapp Branigan and a weakness for masks and peeling the faces off his victims.
Charging his associate, the scarred Victor Zsasz, with obtaining a diamond that contains the location of a fortune that will fund his take over, plans go massively awry when the macguffin is swiped by precocious young pick pocket Cassandra Cain and thus a hunt is set in motion that drags in random elements from both sides of the law. Frustrated Gothamite detective Renee Montoya sees a way to cripple Sionis’ criminal empire, burlesque club singer Dinah Lance realises that this could be a way out of being a criminal informant and humourless vigilante The Huntress sees a means to enact revenge for her tragic past. Of course last but not least – and obviously stuck right in the middle of this mess – is Harley who is carelessly playing the various sides off against each other without a single semblance of a plan…
Can these various women pool their lethal talents to stand against the army that Black Mask is amassing against them long enough to gain even a molecule of trust for one another, and can Harley finally achieve true emancipation?

Firstly, Birds Of Prey (there’s NO WAY I’m writing the whole title more than once) is on the good end of the DCEU scale despite being a fairly uneven affair and is a good, energetic dose of fun that continues the ever upward rise in quality started with Aquaman and Shazam goes a great way to making amends for the hyperactive sideshow that was Suicide Squad.
Similar in chaotic tone, but carried out far more effectively, the star of the movie is (unsurprisingly) Margot Robbie whose scatty maniac narrates the story with as much linear ability as you’d expect from someone whose endured electro-shock therapy from a grinning clown. Casually wandering through all the destruction, breaking the forth wall Wade Wilson-like and mourning the destruction of a hangover sandwich, Robbie essentially carries the lion’s share of the movie effortlessly, decimating a police station with a bean bag rifle, cackling all the while.
In comparison, everyone else gets somewhat of a short shrift, with the rest of the team feeling a little surplus to requirements with Mary Elizabeth Winstead’s Huntress and Jurnee Smollett-Bell’s Black Canary not having a whole lot to do until the admittedly impressive fairground set battle royale (how is there SO MUCH abandoned real estate in town, is Gotham City the size of fucking Texas?). Only Rosie Perez’s dogged cop and Ewan McGregor’s bitchily spiteful villain come close to infiltrating Robbie’s frenzied orbit (McGregor in particular is having a ball – snarkily ordering an execution of a begging victim because she has the audacity to produce a shot bubble in her panic) but it proves not to be too harmful because as I said before, its Robbie’s show…
So as a Harley Quinn movie; Birds Of Prey is a ton of fun but as an ACTUAL Birds Of Prey origin flick it actually kind of sucks, with the end result ultimately being about as fun, fractured, anarchic and frustrating as an X-Men origin movie narrated by Deadpool. I understand that the movie is SUPPOSED to be all over the place as it’s Quinn’s squirrelly narration that we’re supposed to be following but at times the thread gets too tangled for the viewer to care. However, proudly boasting a female director (Cathy Yan marshalling the chaos like an old pro) screenwriter and Robbie having major clout as one of the movie’s producers, the best thing about the whole deal is the continuing steps in the right direction the film signifies (Harley offering Lance a hairband mid-fight one such tiny but delightful touch that springs from the female led story) and one Hope’s that the incoming Wonder Woman ’84 will do even more to level the playing field.

Hardly (or is that Harley) a masterpiece of the genre, Birds Of Prey is still a more than worthy night out and a great outing for it’s lead who’s oddly vulnerable even when pounding in a skull with a giant fairground mallet.
🌟🌟🌟🌟