During the height, of his fame during the 80’s, it would be a fair comparison to say that Freddy Krueger was obviously the Frank Sinatra of the Rat Pack of horror heroes doing the rounds at the time (the Splat Pack, anyone?). Of course an argument could be made that Friday The 13th’s Jason Vorhees is Dean Martin but sadly that’s as far as I’ve bothered to take this particular analogy…
Anyway, the point is that even the guy on the top of the heap has to take a tumble sooner or later and thanks to a noticeably declining fan base, the razor gloved “scare”man of the board (a pun worthy of the Crypt Keeper, there) found it was time to pay the reaper. You see, when your cash cow starts to fumble when getting butts on cinema seats, the best way to wring out that last drop of dollar-dollar is to make a big deal of killing the fucker off – and so that’s exactly what New Line Cinema chose to do…
Kicking off with an Escape From New York style intro which details that Freddy has essentially turned the town of Springwood into a teenager-free wasteland; we follow the last teen left alive as he desperately trie to escape the city limits before Freddy can get to him and succeeds – only to pick up a nasty case of amnesia for his troubles.
Picked up for wandering the streets, this John Doe is eventually dropped of at an innercity centre for troubled youths where counselor Maggie takes it upon herself to try and to unlock his his scrambled brain in order to figure out the seemingly related nightmares that she’s been having.
Hooking up with Carlos, Tracy and Spencer, three kids from the centre who hid out in the van in order to escape for a couple of days, Maggie and “John Doe” reach Springwood to find that the place has been gripped by some weird psychosis that’s caused everyone in town to wildly overact in all of their scenes.
Inevitably people start to doze, so Freddy takes his cue and starts killing the kids in true textbook Krueger style (Spencer gets sucked into a video game which strangely reminds me of that old Simpsons, four player beat-em-up), both Maggie and Tracy manage to escape but not before Freddy manages to finally hitch a ride out of town in the subconscious of the counselor. Finally released from the boundaries of Springwood Freddy is free to unleash his particular brand of night terrors on an unsuspecting world – although chooses to only focus only on the two other people that Maggie seems to know, go figure – can he possibly be stopped in time…. check out the title for a hint. 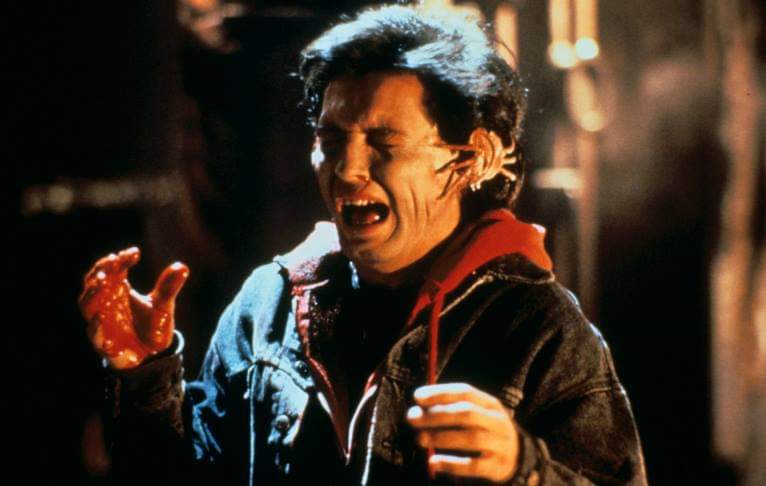 Freddy’s Dead pretty much hammered the final nail in the coffin of Krueger’s exploits all right, but probably not in the way the filmmakers expected. Over the last couple of movies the line between legitimate scares and Freddy’s increasingly goofy exploits were getting ever more blurred, featuring segments where the dream stalker whizzed around on a skateboard or pretended to be a surgeon but this supposedly final movie in New Line’s longest running franchise pours on the silly at a pace that even the legendarily recuperative powers of Krueger himself couldn’t shake off.
Freddy’s wisecracks now seemed half hearted and as painfully forced as a blocked bowel movement while Englund’s performance seemed as tired as the material he was being force to regurgitate, but worse yet, what little mystery the character still had was completely dispersed thanks to a leisurely stroll through his memories in the excitedly hyped “Freddy Vision” which in actuality was merely blurry 3D with all the clarity of trying to read a colourblind test through mud caked binoculars. Seeing snippets of his life flashed before you as he batters mice with a hammer in school or endures a whupping at the hands of his stepfather (played by none other than Alice Cooper) a par for the course but seeing that Freddy not only had a nice house but had a wife and kid too only erodes the mystique of the character completely down to the nub.
And yet despite obliterating the last lingering shards of credibility the villain has (numerous times he actually LOOKS at the audience like he’s Bugs fucking Bunny or something), and giving us an insipid “who’s your daddy” plot line, Freddy’s Dead actually manages to score some positive points as it trundles along to it’s laughable ending.
For a start, some thought has been put into making one or two of the dream scenes actually relatable; a repeating nightmare that sees John Doe constantly falling throughout various scenarios (airplane, steep hill…. flying house?) is one of the rare moments in the franchise that deals with the sort of dream that people actually have although the movie soon squashes it flat by having Freddy show up on a flying broomstick and quoting The Wizard Of Oz.
Another thing that the film does is actually gifts it’s younger cast with actual (if thinly sketched) back stories, something the Elm Street franchise has always had over similar movies where the majority of the teen cast actively booze, bong and bone their way to the business end of a kitchen knife. Various interesting references to the darker past the city kids have survived before Freddy even sticks a razor sharp pinky finger into their lives and at least two of the new batch have experienced serious abuse at the hands of parental figures – Carlos’ mother made him deaf while Tracy suffered sexual assault at the hands of her father – but again, any interesting themes raised are soon abandoned in favour of having Freddy crack wise about playing Nintendo…
The cast do well and features a large amount of roles and cameos from some recognizable faces such as Robot Chicken alumni Breckin Meyer, former Bond villain Yaphet Koto, Johnny Depp getting hit in the face with a frying pan and… Tom Arnold and Rosanne Barr (I probably should’ve stopped at Depp, right?).
Despite all the hype and crescendo (and a really cool edit of all the series best bits over the end credits) Freddy’s actual death, simply put, totally blows, with his final battle consisting of him rolling around on the floor with his long lost daughter in a basement who stomps the living shit stomped out of him. To say that it’s somewhat of a shitty end to such a long running character is somewhat of an understatement but could you imagine it if Robert Downey Jr’s exit from the MCU involved getting bitten on the nose and blown up with a stick if dynamite like fucking Wile E. Coyote?
It’s worth noting that the movie boasts the sole female directing credit the series has to date with Rachel Talalay who further angered the world with Tank Girl but spectacularly redeemed herself with some choice episodes of Doctor Who, and she aquits herself well here with the visuals but the plot stinks.
How else would you describe a film that has a near omnipotent nightmare demon prove his power to a dream opsessed psychologist by doing a fucking cartwheel? 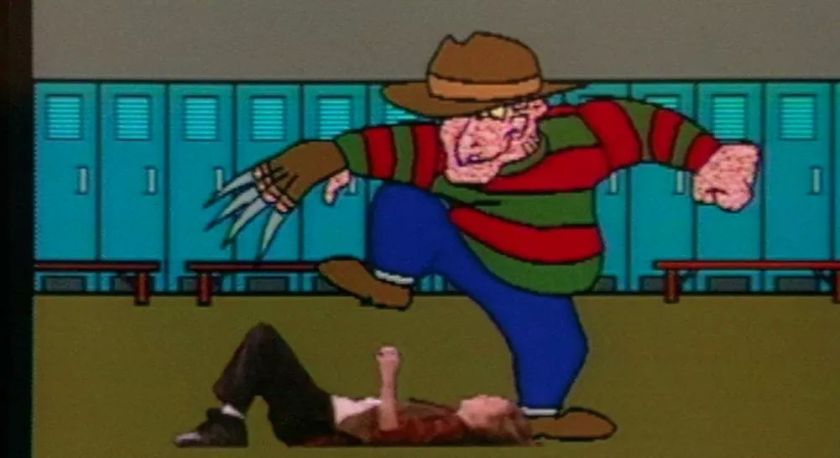