Back in 1990 Richard Stanley was poised to a bold new voice in genre filmmaking as he launched his low budget, nihilistic, trippy, sci-fi horror Hardware onto the world. The South African director, a music director heavily influenced by shamanic mysticism and spiritualism, however found his career in movies stalled by the traumatic experience of lensing the catastophic 1996 version of The Island Of Doctor Moreau (detailed in the hugely entertaining documentary Lost Soul) and fans were left to wonder what might have been. However, with his phoenix style return to movies in 2020 – with trippy HP Lovecraft adaptation The Colour Out Of Space, no less – it’s well worth seeking out Stanley’s flawed but deeply interested debut feature; a stylishly vibrant but staggeringly derivative chunk of grimy cyberpunk.
Soldier Moses Baxter has taken a leave from a radiation soaked war to visit his girlfriend Jill, an artist who has become reclusive to the point of being agrophobic. Running into a Zone Tripper – one of the nomadic, enigmatic people who scavenge the toxic desserts that surround the cities – “Mo” buys the remains of a wrecked robot found out in the inhospitable wastelands as a christmas gift for Jill and with his buddy Shades, goes to visit her.
However, Jill is hardly in a good place these days, raging against the fascist government plans to restrict people giving birth and being subjected to the whims of a voyeristic pervert who lives across the street, she and Mo reconnect on very shaky terms as they find that their politics and views are getting too different.
It seems that a trip to a couples therapist is out of the question when turns out that the robot parts gifted to her by Mo is actually a dangerous form of AI known as the Mark 13, an outlawed military unit which not only is programmed to sadistically butcher anyone it comes in contact with but also has the ability to virtually rebuild itself from scratch from any mechanical household objects.
So rebuild itself the Mark 13 does and lays siege to Jill while trapping her within her own apartment and stalking her with the various spikey limbs it has at it’s disposal with the intent of reducing anyone who stands in it’s way into a pile of bloody chunks. 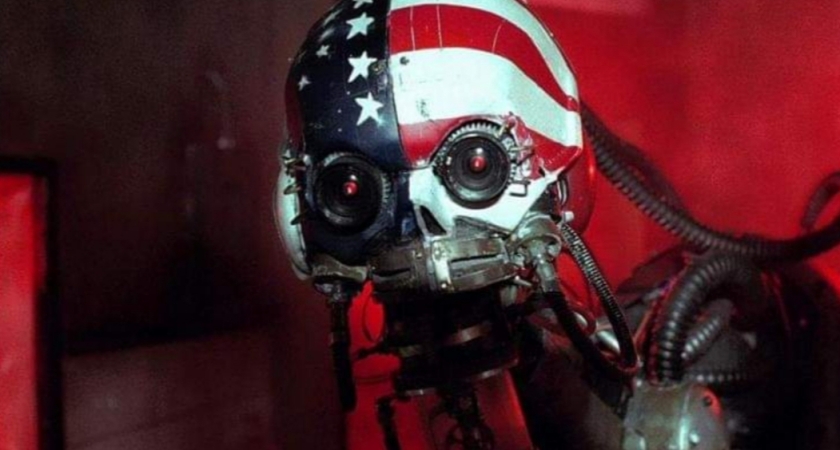 A bleak vision of the future that has us cursed with living in a radioactive shithole with only the disembodied, screaming voice of Iggy Pop’s hysterical DJ to keep us company, Hardware isn’t particularly subtle – as evidenced by Lemmy from Motorhead’s cameo as a boatman who plays (you guessed it) Motorhead loudly on his stereo – but it is 100% dedicated in driving it’s gritty, gloomy vision home as hard and as bloody as it can. Characters smoke legalised marijuana while endless death metal music videos play on TV between ads for radiation free reindeer steaks as mankind weakly spirals into war-torn; pollution soaked decay.
The movie is oddly prevalent with touched on concerns of extreme poverty, Jill’s general withdrawal from society and the environment being used as mankind’s own personal toilet paper – but to be brutally honest, EVERY post apocalyptic movie made at the time all suggested similar things so accurately stating that the world was going to turn into pure shit was like shooting fish in a barrel…
The main complaints leveled at the movie at the time was it’s procession of obvious plot-holes of varying sizes that the script seemed simply uninterested in addressing in favour of heaping on yet more nihilistic imagery and certainly that had somewhat of a point. The logicality of creating an unstoppable killing machine that breaks down the second it gets wet is baffling as your lethal army of murder-bots would only be a threat until the second a spot of precipitation reared it’s head they’d all be turned into elaborate hat racks. And why would the military need to load this thing with hypodermic “fangs” loaded with highly hallucinogenic poison that make it’s victim enjoy the experience like it’s some kind of Dario Argento-esque serial killer when in fact it’s supposed to be a battlefield cleansing war machine?
Of course the reasons for all of the plot holes detailed above (and more) is that Richard Stanley’s MO is simply not care about logic and is instead to load the film with bucketloads super stylish symbolism (not to mention more colour filters than is strictly necessary) that wildly veers from super cool to incomprehensibly pretentious and back again and often within the same scene. A far more interesting experience to watch now than it was then, the large and fairly obvious steals from other movies (Terminator, Predator, Blade Runner) isn’t as glaring as it once was with some distance on it’s clock stands quite competently on it’s own two mismatched, robot feet as a memorably gloomy 90’s throwback.
In fact, until 2012’s Dredd came along, Hardware stands as probably as the closest cinema has ever come from accurately depicting the eccentric science fiction seen in legendary British comic 2000AD – which is highly ironic since the filmmakers were subsequently sued over the screenplay because it plagiarised a short story entitled “SHOK!” that appeared in a Judge Dredd magazine in 1980.
All this being said, I’ve always had a soft spot for the film which strives to create an extraordinarily lived in world on a meager budget and the Mark 13, while admittedly strongly resembling a malformed, punk rock Terminator (the stars and stripes sprayed onto it’s head is a nifty look) goes about it’s bloody business with lashings of satisfyingly messy gore (courtesy of the guys who made Hellraiser’s Cenobites), jabbing the eyes out of some guy’s head with it’s fingers and bisecting another with a well-timed bulkhead door (although why someone would need a door that wouldn’t look out of place in a nuclear bunker for the entrance of their apartment is beyond me…).
The cast, including American Horror Story’s Dylan McDermott, struggle somewhat with unlikeable, emotionally damaged characters but considering the tone of the piece you quickly gather that’s probably not only deliberate but also the whole point.

Deliberately weird, fiercely experimental and with it’s VERY rough edges only adding to the overall grit of the story, Hardware may be the by-product of other, better movies cobbled together much like the chaotic frame of it’s mechanical villain, but over the years it’s voice has become far clearer now than it was back in the 90’s and is way overdue of a reappraisal.
Die, Robot.
🌟🌟🌟