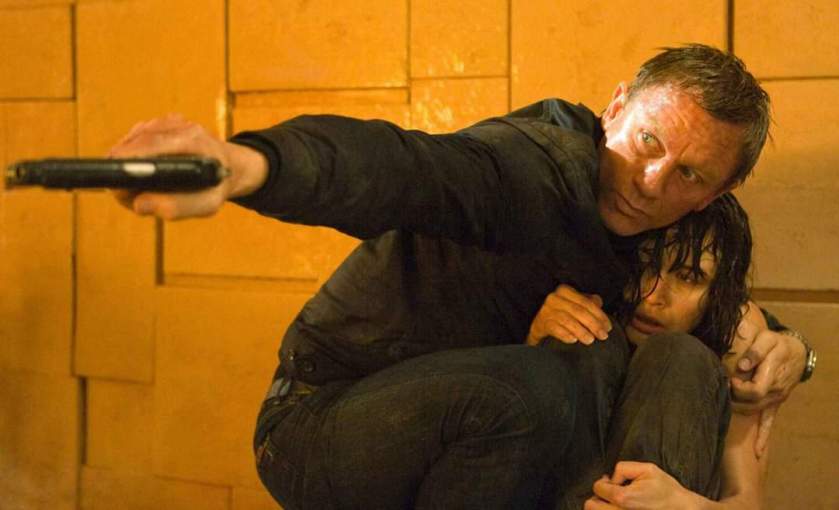 After James Bond returned – more Dr Who style than Dr No – as younger, more successful and more relevant than ever, fans eagerly awaited to see what the seemingly immortal secret agent had in store for us next. After all, 007’s spectacular rebooting with Casino Royale had the same impact as Batman Begins, that other redux of a ripped, upper class, alpha male who saves the world by unmercifully beating on bad guys with weird gimmicks. Surely if Casino Royale approximated to Christopher Nolan’s “real world” reworking of the Caped Crusader then the math tells us that whatever follows could be The Dark Knight of Bond flicks – or at least that’s what my overexcited brain was telling me.
However, reality told a somewhat different story and instead we got Quantum Of Solace – an admirably slick and surprisingly violent entry into the Bond cannon that failed to capitalize on the innovation that the previous entry had given us and instead gave us a vengeful 007 too far divorced from the character we wanted.
Picking up minutes where Casino Royale ended (technically making it Bond’s first “proper” sequel) where James thudded a bullet into the thigh of shadowy handler Mr White, we find that Bond is still reeling from the effects of Vesper Lynd’s last minute betrayal/death and has decided to treat his rage and grief the way every white male does in a film like this -by refusing to sleep and chugging back more booze than the cast of Cheers.
Understandably, mother figure M is alarmed but has to put common sense on hold when it’s discovered that MI6 (and virtually everywhere else) has been infiltrated by a mysterious organisation who seem have more disturbingly placed moles than a 95 year old’s back. Unleashing Bond to find out what’s going on, M is somehow surprised when 007 essentially stalks his way through Haiti and Austria, mortally wounding everyone who looks at him funny – but eventually with the help of a rogue agent named Camille he stumbles across Quantum, an organisation run by environmental entrepreneur Dominic Greene that destabilizes governments in order to horde natural resources like water.
As 007 relentlessly tests the patience of M – not to mention the rapidly dwindling health meters of friend and foe alike – things come to a head in the middle of the Bolivian desert in the world’s most flammable hotel, but can Bond pull himself back from the brink of his inconsolable rage to do the right thing before he loses his soul forever to vengence?

A film as uneven as Jack Black and Alicia Keyes’ wailing theme song; Quantum Of Solace’s main problem is that thanks to the script getting rushed out in order to side step a writer’s strike, what we have strays too far from what Bond is despite actually having some relevant things to say.
It’s not like Bond hasn’t been out for revenge before… Old Timmy Dalton happily (and by happily, I mean utterly stone-faced) roasted wrong-uns alive and harpooned the shit out of people when Felix Lieter had one of his legs messily used as a great white’s chew toy way back in Licence To Kill but the film insists on spinning it’s wheels too long during it’s run time and frequently seems to have no idea what to do with their characters when they aren’t laying some major hurt on other people.
Luckily this “hurt” turns out to be fairly stirring stuff, opening with a ferocious automobile smackdown that’s so brutal you’ll virtually be spitting out metal and gravel like you’ve just endured a car crash facial. This is swiftly followed up by a brusing foot chase through the streets of Siena, Italy and while it’s inferior in comparison to the one that opened Casino Royale, it still turns out to be immaculately shot and performed and climaxes with an astoundingly dangerous looking scramble over some rickety scaffolding that involves Bond and his opponent being swung all over the place on ropes. But it’s about the time when 007 gets involved in a boat chase in Haiti that you start to clock that something’s not quite right… The first third of the movie is literally Bond slaughtering a baddie and then finding a clue that takes him to another baddie for him erase off the face off the earth like a serial killer on a scavenger hunt; and while initially exciting, it soon becomes repetitive and almost verges into grim parody.
The film admirably tries to continue steering Bond into the realm of real world politics (global water shortages, corporations influencing US policy) and even further away from laser watches and cars that turn into submarines but ultimately veers too far into Bourne territory while losing the delicate balance that Casino Royale managed to maintain so well. Similarly, while Daniel Craig’s lauded portrayal of 007 as “broken Bond” is a personal favorite of mine, Quantum makes him way too broken and not enough Bond. A good example if this is the dumpster based fate of a rare returning character left standing after Casino. I’m assuming it’s supposed to be tragic and a bleak insight into 007’s lethal world but just comes off as profoundly odd and annoyingly distracting, as if director Marc Forster (who went on to helm the similarly messy Brad Pitt, political zombie flick World War Z) is simply trying too hard to make Bond staggeringly unlikeable.
And that’s the secret of MI6’s most treasured asset – the fact that he does the unspeakable things that he does with one eye on the greater good of Queen and country while never losing that weird schoolboy charm, even when he’s cold-bloodedly murdering the bollocks off somebody. A scene where he stabs a would-be assailant in both the jugular and the artery in the thigh and then holds him there while he bleeds out while nonchalantly looking around, seriously tests the line of the film’s rating, as does the decision to make one of the villains a hulking serial rapist. Bond SHOULD be serious in this incarnation (God knows we’re not ready for another Octopussy) but not at the expense of the fun and sheer exhilaration the series is famous for.
Speaking of exhilaration, I should really note that this is the last 007 outing for 5-time Bond composer David Arnold who surely is the greatest musical contributor to the franchise since John Barry and goes out on a high here.
Craig still convinces in the iconic role and has able support from an exasperated Judi Dench, a feisty Olga Kurylenko and an early role for Gemma Arterton (who gives the film it’s massive visual ode to Goldfinger) with French actor Mathieu Amalric being sufficiently sleazy as the villainous Greene, but Quantum Of Solace simply has way too many loose pacing issues that are just left dangling that really needed at least one more draft in order to tie them up tigher. 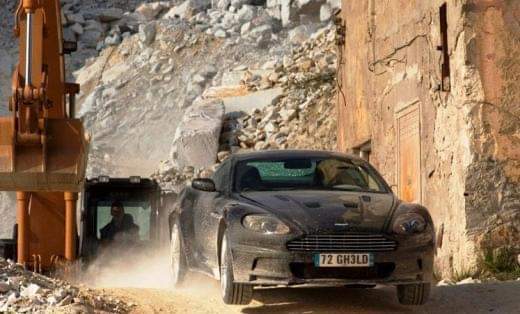