After Michael, Jason and Leatherface all had shiny new updates all throughout the noughties (Chucky trailed behind and got one in 2019 whereas Pinhead never got one at all), only an idiot would have bet against Freddy Krueger getting a redux sooner or later and sure enough the razor gloved one made his 2.0 bow. Modern technology allowed to run riot on a franchise with such darkly fantastical imagery was a mouthwatering concept (let’s he honest here, Freddy’s stretchy arms in the first movie aren’t fooling anybody) but a question remained, is a Nightmare On Elm Street movie truly a Nightmare On Elm Street movie without original Freddy actor Robert Englund behind the make up?
The kids of Elm street are experiencing nightmares that leave their victims in far worse shape than having a sweaty pillow and as their numbers are gradually turning up dead, the survivors try to unravel this monstrous mystery. After having dreams of a hideously crispy wraith in a striped sweater and a clawed glove that would give Edward Scissorhands a run for his money in a rock, paper, scissors tournament, the kids deduce that this all seems to be the work of Fred Krueger, the caretaker of a play school who vanished when all the kids were toddlers. As they seek to uncover the conspiracy over his disappearance (what do you expect when one of the prominent members of the community is played by Clancy Brown?) they desperately resort to evermore extreme methods of staying awake that starts with coffee and pills and then soon goes hardcore with self-mutilation by cigarette lighter and injections of pure adrenalin because well ALL got a couple of those kicking about the place, right?
As a rather unpalatable truth looms on the horizon and the survivors stumble upon a way of making Krueger as vulnerable as an undead dream slasher with a fist full of finger knives can possibly be, a final showdown takes place that’s gonna result in more than a little bit of blood being spilled – but how do you kill something that isn’t techinally alive in the first place..?

Instead of building up the threat little by little, as if terrified of sitting still for a single second, it gruesomely off’s a side character in a public place immediately right in plain sight of a couple of screaming leads which removes any sense of normality and breathing space a film like this desperately needs. Wes Craven’s original masterpiece opened with a nightmare and then expertly laid out the mundane everyday lives of these kids before ripping it apart with an iconic razor-glove – here we are supposed to buy that ALL our major players are in the same neon soaked diner in the wee hours of the morning for the sole reason that we can get their clumsy introductions out the way as soon as possible. It’s here that I should mention that is a product of Michael Bay’s Platinum Dunes production company, which explains the heavy reliance on obnoxious jump scares and overbearing production values.
Proving my point in ways better than I could even explain, the Elm Street remake trots out all the iconic imagery from the ’84 original with shiny new technology that cost 10 times as much for half the impact. A vision of Freddy emerging through a wall was once achieved by having the actor push his face into white spandex but here it’s rendered in crappy CGI and ends up having all the impact of a marshmallow battering ram.
The leads – including an on-the-cusp-of-fame Rooney Mara – are fairly dreary and forgettable but that’s due to it’s script which awkwardly (and ironically) sleepwalks from scene to scene where everyone of the victimized kids seem to cotton on IMMEDIATELY to what is going on. “If you die in your dream you die for real!” Breathlessly pants one character who seemingly pulls this vital information out of his asshole like a rabbit out of a magician’s hat despite having no idea what he’s talking about. Of course the rest of the cast (and the movie) accepts this as fact just to keep things moving along as fast as they can but you can’t help but feel that the movie doesn’t trust it’s audience in the slightest to do simple things like retain information or care about plot.
This gets us, inevitably, to Freddy Krueger himself. Predictably a shadow of his former Robert Englund-shaped incarnation, Jackie Earl Hayley is still a solid choice for a thankless role that simply no one was ever going to except a new actor in. Wearing the familiar glove and jumper (and a fedora that doesn’t look like it fits very well) he battles gamely through burn make up that makes the skin on his face stretched as tight as a drum but allows virtually none of the actor’s range to show through – and let’s not forget, this is a man who managed to project himself though Rorschach’s featureless mask in Watchmen), but still gets some choice lines. “Did you know…that after the heart stops beating, the brain keeps functioning for over seven minutes?” Leers Krueger to a ravaged victim, seemingly now a fan of biological trivia, “We got six more minutes to play.”
But it isn’t Freddy’s lines or his prosthetics that’s ultimately the problem here. Over the years, the character been carefully crafted to stop short at simply slaughtering his young victims, keeping the bodycount he amassed before he burned up like a hot dog in an inferno very much shrouded in mystery. Here the film fully embraces the fact that Krueger was a peadophile and that his immolation based lynching was in direct connection to his reprehensible “interests”. It’s a terrible filmmaking decision as the “noncing” up of a horror icon not only fails to make the character more scary but makes the movie a whole lot less palatable in general. Not only does it make light of the the horrendous crime in general but what self-respecting fan of the franchise would want Krueger to be cut from the same cloth as Gary fucking Glitter? Again, as if to prove my point (one thing this movie IS good at), a scene which has the two remaining leads actually MAKING OUT in the secret room where they were molested in as children is shockingly conceived and completely tone deaf. 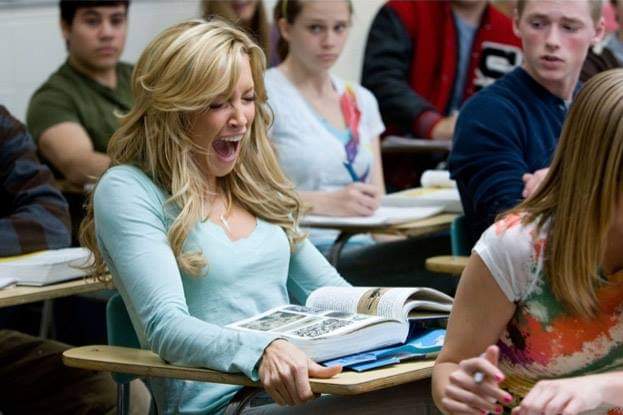