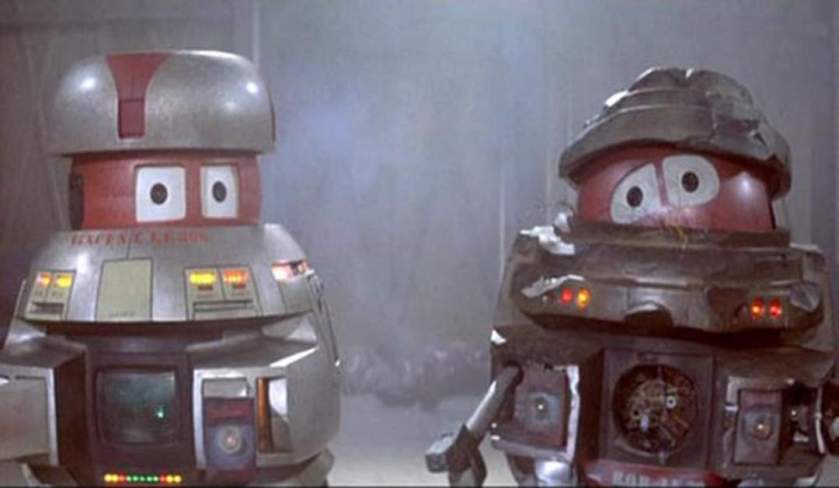 In a time where both Stanley Kubrick’s 2001 and George Lucas’ Star Wars had not only both changed the face of Science Fiction cinema but the face of cinema itself, Mickey Mouse took a side long glance at both, straightened those puffy, white gloves of his and thought to himself: “I could fucking do that!”.
A history denotes, it became obvious that the House Of Mouse blatantly COULDN’T do that, but it wasn’t for the want of trying.
In 1979, Disney unleashed The Black Hole upon an unsuspecting world, a very un-Disney-like slice of suprisingly ruthless Sci-fi that confused and frustrated audiences with a tone that confusingly between broad space action/adventure and pompou, arty space opera that hurls everything but the space-kitchen sink at you in the vain hope that any of it will stick. The fact that it’s remembered at all is a testament to how traumatic the movie was to a young viewer back in the day which ranks it right up their with other bizarre, brain frying Disney misfires like Dragonslayer and Return To Oz.
We join the crew of USS Palomino as they are reaching the end of a long mission exploring deep space and before you even question how a mere 5 person crew is sufficient to explore the depths of space without developing crazed space dementia, they happen upon a black hole so huge, it dwarfs anything ever discovered before. Things get weirder when, on the edge of the event horizon, the crew spies a ship somehow just sitting there while managing to defy the insane gravitational pull of the interstellar plug hole. It turns out to be The Cygnus, a notoriously lost craft whose captain – a bearded and clearly batshit example of lunacy by the name of Hans Reinhardt – defied orders to return home and bogged off to explore the stars on his own terms. Brushing off clearly important questions like “where’d your crew go?” and “where’d you get all these human shaped robot crewmembers from?”, Reinhardt welcomes the five members onto his voyage of discovery with varied results: Captain Dan Holland and his Lieutenant, Charlie, stiff upper lip the whole thing and treat Reinhardt with caution, ESP sensitive science officer Kate wants to know what happened to her father who one of The Cygnus’ former crew members, resident journalist Harry (A journalist? On a long-ass space mission? What fucking paper does HE work for?) senses a scoop while civilian leader Alex proceeds to work his way as far up Reinhardt’s butt as he can to kiss it in fanboy admiration.
While none of these geniuses can quite put two and two together and work out that dear old Hans is obviously one star short of a solar system (especially since he’s played by Maximilian Schell in full sinister, cabin fever mode), offensively cute, yet eye twitchingly pedantic droid V.I.N.CENT manages to work shit out thanks to OLD B.O.B., a battered robot of a similar model who spills his electronic guts as to what the creepy Captain has really been up to.
Realising that the cosmic jig is up, Reinhardt sets a course for the black hole in order to realise his goal and explore the unexplorable no matter how deplorable and the crew of The Palomino struggle to escape the craft as it prepares to become a giant space suppository to the terrifying space opening but with The Cygnus’ droid army, led by wicked cool looking robot bouncer Maximilian, standing in their way, where can they possibly go?

Most of the questional pleasures derived from The Black Hole solely come from how brazenly weird it is for a movie obviously made to cash in on the crazed Star Wars mania that was still sweeping the globe at that time. The cute robots and esoteric space ship designs all scream lucrative action figure deals but when you actually get into the nitty gritty of the movie you soon start to wonder what kind of audience the film is supposed to play for as the rather out-there concepts and some truly unsettling deaths skew a bit too adult for any wide eyed moppets in the audience. Similarly, any mature film fans must have questioned why all these people who are qualified to fly a spaceship can’t instantly work out the mystery of the missing crew despite it being as easy to solve as a two piece jigsaw puzzle. It doesn’t help that the heroes are highly trained in being bland too, despite being mostly formed of a legitimately interesting cast of character actors such as Robert Forster, Ernest Borgnine and Norman Bates himself Anthony Perkins. The fact that these guys can’t manage to elevate their characters above the standard cookie cutter roles just goes to show how flat the script is but thankfully some solid droid shit and a couple of truly memorable moments has managed to keep this odd adventure locked in my brain since childhood.
Voiced by the silken tones of Roddy McDowell and the grizzled drawl of Slim Pickens, with their round eyes and rotund bodies, bith droids maydistractingly look like South Park characters but they contain more life in them than the majority of the cast put together and Maximilian, Reinhart’s imposing robotic dreadnought of a enforcer, gives good villain when either indulging in some entertaining robotic dick measuring with V.I.N.CENT or traumatically buzzsawing through an unsuspecting victim with arms loaded with whirling blades.
But what really locks The Black Hole into the what-the-fuck-IS-this-movie feeling that perminates the movie is it’s legitimately baffling ending which has the surviving cast enter the hole in space only to be treated to a flaming vision of Heaven and Hell which plays like an unholy, LSD infused mash up of Dante’s Inferno and the It’s A Small Word ride at Disneyland.
This violent, handbrake turn from what is essentially an outer space adaptation of Jules Verne’s 20,000 Leagues Under The Sea must have been the final straw for any frazzled tots in the audience and all but ensured that Disney’s crack at George Lucas’ title crashed and burned on re-entry and yet it’s gonzo legacy has endured if only by the night terrors it no doubt inspired.

A deeply flawed derelict from the past, it’s nevertheless an intriguing watch whenever it happens to float by due to it’s eccentric story choices, cool sci-fi designs and a fantastically huge score from the ever-dependable John Barry, who made this his second score for an outer space set Star Wars cash-in in the same year (the other one being Moonraker) but ultimately The Black Hole, like it’s namesake, is a twirling, cosmic ride that looks pretty but ends up leading nowhere.
🌟🌟