Seen these days as somewhat of an eccentric weirdo upon it’s release in 1990 Darkman could also be seen as a hyper-active dry run for Sam Raimi’s ascension into the mega-budgeted shenanigans of the original Spider-Man trilogy. A gleefully
goofy superhero mishmash of noir-esque characters such as The Shadow and such Universal era icons as The Phantom Of The Opera and The Invisible Man, the movie weaves the standard action movie heroics with Raimi’s trademark of brutally hurling around both his camera equipment and cast – which surprisingly includes more than it’s fair share of future oscar winners – to create a uneven, but robust adventure that as fun as it is really bloody weird.

Lab dwelling boffin Peyton Westlake has been labouring to create a new kind of synthetic skin for burn victims to use to blend in despite their scars but unfortunately has only come up with a composition that disintegrates into goo after 99 minutes. However, thanks to some legal shenanigans involving Julie, his lawyer girlfriend and an errant memorandum that points a guilty finger at some powerful businessmen; Peyton is visited one night by upmarket career criminal Durant and his squad of misfit goons who torture the scientist before blowing him sky high in his exploding lab.
Inconveniently surviving this unbelievable ordeal, Westlake wakes up as a John Doe to find that not only are his face and hands seared beyond recognition, but surgeons have severed a nerve in his brain to remove all feeling in the unfortunate man to avoid agony from his flame grilled misadventure. The side effect to this procedure is that thanks to no longer having the ability to feel, Peyton now suffers devastating mood swings that makes Homer Simpson seem balanced and blinding fits of rage that gives him augmented strength thanks to the adrenaline coursing unchecked through his system. While it’s remarkably hard to turn a frown upside down when you no longer have lips, Peyton manages to salvage some of his old equipment and swans around in a tattered black coat and fedora while wrapped in filthy bandages, trying desperately to finish his work.
Finding that his synthetic skin can crack the 99 minute barrier if he stays in the dark, the beleaguered scientist tries to restart his relationship with an understandably shocked Julie but gets sidetracked when he stumbles upon the identities of Durant and his merry band of criminal chums. Reconfiguring his work to make masks of the men who wreaked such terrible havoc on how photogenic he used to be, Westlake masquerades as the various men, turning them against each other when he isn’t killing them in deranged bouts while losing himself in impressive amounts of red mist.
With every bit of revenge gained, Westlake becomes in real danger of losing the man he once was and the life he’s trying to rebuild with Julie but when Durant cottons on to who exactly is disrupting his operations, both of Peyton’s nightmarish lives come crashing together in an orgy of explosions, helicopters and lots AND LOTS of Sam Raimi crash zooms. 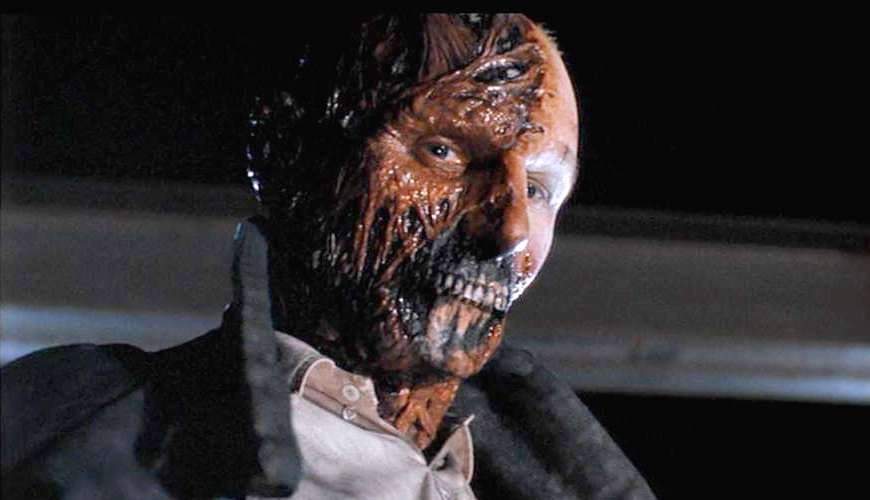 Described on set by it’s impish director as a “toning down” of the frenetic sensibilities he sported in the Evil Dead movies, Raimi immediately proves himself a complete and utter liar by churning out scene after scene of broadly plotted scenarios each one more absurdly overblown than the last. Take the vicious torture of Westlake at the hands of the villainous thugs (one of which ingeniously sports a machine gun built into his prosthetic leg) which involves the poor bastard being beaten within an inch of his life, half-drowned in acid, electrocuted and left to die in a gas explosion that’s triggered by a dippy bird igniting a lighter. In anyone else’s hands the scene would be a violent and disturbing set piece but Raimi stages it like some sort of a gory looney tunes extravaganza. Raimi turns the full force of his spiteful humour onto his hero’s tragic scenario too, heaping on the tragedy of his situation with malicious humour and subjects a pre Oskar Schindler Liam Neeson to a lot of the psychotic prat-falling he usual reserves for Bruce Campbell way before the actor flexed his action muscles later in his career with the Taken films and some such.
Despite being quite the serious actor back in 1990, Neeson seems to be having a ball despite being literally caked in burned prosthetics and wreathed in bandages (Darkman sports a charred mug that makes Freddy Krueger look like Fabio) and somehow brings out the character’s wounded pathos while simultaneously going full batshit whenever Darkman epic loses his rag. Screaming like an animal because a fairground scumbag has scammed him out of winning a stuffed elephant for Julie, both Neeson and Raimi turn up the lunacy as we see Westlake’s world literally crumble into unhinged hellscapes as his sanity briefly takes a much needed hiatus and the once mild mannered scientist starts breaking bones.
Matching Neeson’s over-the-top anguish with a military grade sneer is L.A. Law’s Larry Drake as the snobbish Robert G. Durant, a magnificently arrogant prick with delusions of grandeur as he tries to blend in with the upper class despite being finger-snipping muscle for rich bigwigs. Not coping even half as well is Frances Mcdormand who is relegated to the same kind of damsel in distress schtick Kirsten Dunst had to endure in the Spider-Man movies (although she doesn’t nearly have to scream nearly as much) and the role feels a little beneath her if I’m being brutally honest.
Remember at the start of the review I claimed that Darkman was Raimi’s dry run at Spider-Man? Nowhere is this more apparent than in the huge action sequences, especially in the scene where Darkman clings to a cable as Durant’s helicopter flings him all around the city’s skyline while the villain fires wildly at him with a grenade launcher – swap the big black coat for red and blue spandex, the helicopter for a Goblin Glider and a lunatic shooting grenades for a lunatic throwing pumpkin bombs and you’re two thirds of the way there. 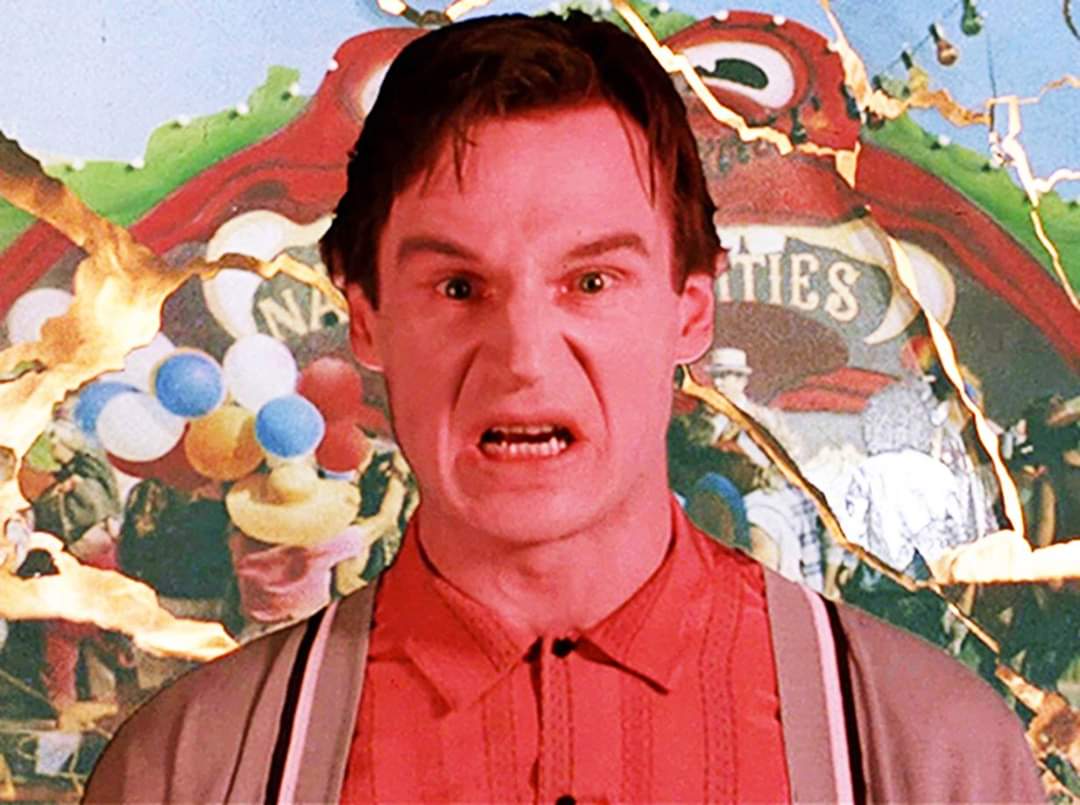 Zany, wonderfully bizarre and camp as fuck, Darkman is just going to be too relentlessly wacky for some, but if you manage to get on it’s endearingly barmy wavelength, it’s off-beat charms make it very apparent that Raimi had what it takes to emerge out of that dilapidated cabin in the Tennessee woods and make it in Hollywood while still finding time for a cheeky, last second Bruce Campbell cameo as it gives superheroes the ultimate facelift.
🌟🌟🌟🌟