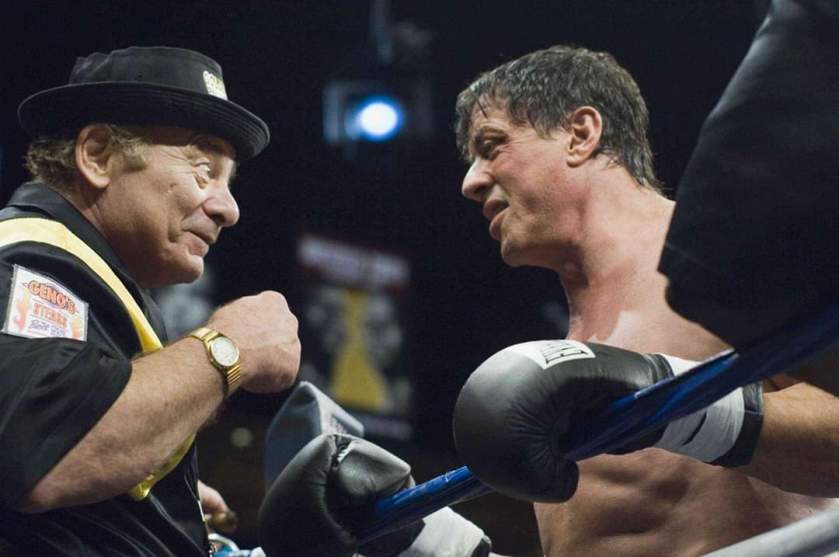 There’s a bit fairly late in this, the sixth movie in the Rocky franchise that perfectly encapsulates what it was like to watch this movie on the the big screen but before I relay to you exactly which one that was I’ll give you a little context.
Back in 2006, a few months away from the movie’s release, I figured I’d get myself up to date on a franchise I’d seen, but never really embraced that much. Sure, I liked a few of them (I, III & IV are great for different reasons) but I’d never actually sat down an really watched them. Like, REALLY watched them, you know?
So having procured myself a box set containing the career of Robert Balboa I settled down to take it all in and was instantly hooked (or should that be right-hooked) by the continuing adventures of Stallone’s loveable, droning lug and suddenly the prospect of a sixth installment left me utterly pumped.
That scene I referenced earlier? It’s when Rocky climbs into the ring to face his opponent and one of the announcers (the youngest and significantly less cynical of the three) goes all fanboy when Rocky nods him a little greeting and remarks how he can’t believe he’s getting to watch him box live after only watching his matches as a kid. It’s sweet, funny, naturally real and, in a supremely meta kind of way, is exactly the same feeling I felt finally watching a Rocky movie on the big screen for the first time.
We rejoin Rocky at a lonely time in his life; his beloved wife, Adrian has succumbed to “Woman Cancer” (his words, not mine), his son (played by Lost’s Milo Ventimiglia, whose crooked mouth has him looking more like Stallone’s son than Stallone’s ACTUAL son did in Rocky V) is distant and tired of living in his shadow and our hero eeks out a modest existence telling his boxing stories to the patrons of his restaurant while still giving out a helping hand to the various down and outs that still hover around. So far, so depressing, but deep inside him the fires of combat are still smoldering and are ignited by TV show that asks the question what if boxing legends from the past squared up to modern day champions by using a computer algorithm. Declaring that a young, in-his-prime Rocky would be able to defeat current Heavyweight champion Mason “The Line” Dixon, the programme fires up speculation on what would happen if the two would actually meet.
Dixon, a somewhat untested champion, is told by his management that a 10 round exhibition bout might help with some of the negative reviews he gets as a fighter and before you can say “Wait, doesn’t Rocky have brain damage?”, the wheels begin to turn and Rocky is seriously considering accepting. This invokes the ire of his whiny son – who is horrified of the prospective embarrassment of his sixty one year old dad getting his clock stopped by a trained boxer half his age – and the worry of brother-in-law Paulie who’s own advancing years means he’s been made redundant. As the date of the fight looms like an oncoming roundhouse right, Balboa does his best to train his knackered old body, focusing mostly on brute force punching power; but can this possibly be enough to stand up to a hungry champion in his prime? As the worried expressions of those around him mirror our own, it’s obvious that this will be Rocky’s last fight but will he go out standing or in a condition considerably better known as dead? 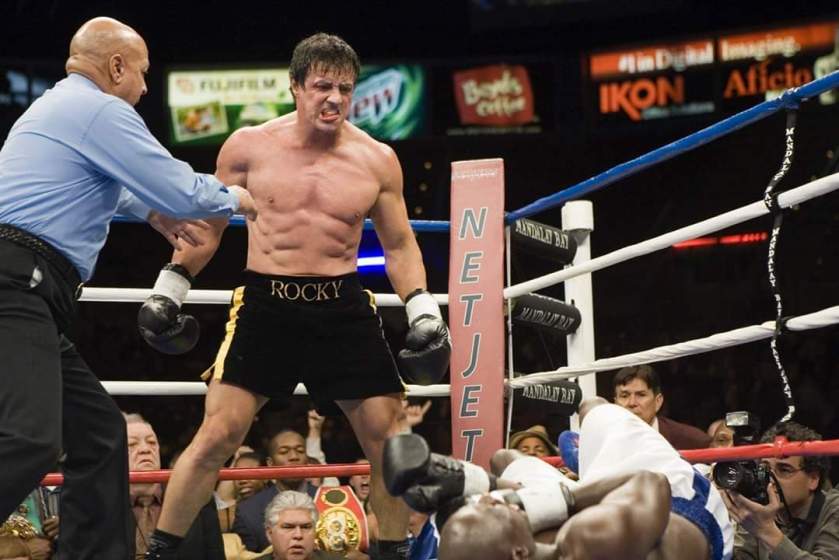 Stallone bringing back arguably his most famous character from a sixteen year hiatus wasn’t exactly a sure thing, after all the much maligned Rocky V was as entertaining as swigging from the contents of a spit bucket and only half as nourishing but all credit goes to the writer/director/star for making this movie arguably the best installment to date since the original.
Fully embracing the concept of an aging hero in a highly physical world is fairly standard now what with the rise of films like Bad Boys For Life, the fourth Indiana Jones, and the last couple of Terminator movies (not to mention virtually every movie Stallone has made since) but when Rocky Balboa came out, the only other movies to touch on the subject in a similar way were the 90’s Clint Eastwood vehicles Unforgiven and In The Line Of Fire and thus Stallone’s return feels fresh and vital. Another thing that makes the movie go the distance is that the inseparable symbiosis between actor and character which causes their careers to mirror each other so exactly has probably never been stronger which gives us a fascinating look at a man who has long outgrown his prime but gets one more chance in the lime light.
Far more dramatic than the cartoon excesses of installments past we are treated to quite possibly the greatest performance of Stallone’s career until Creed came along (his Keep Moving Forward speech is so legitimately heartfelt it delivers a clean stiff jab clean to the feels) and as the movie gets ever closer to it’s climatic Las Vegas bout a strange thing starts to happen. The pre-match montage, while still as triumphant as ever (“Lets start making some hurting bombs!”) is tempered with a very real twinge of unease as the realisation sets in that if Rocky goes down for the ten count, there’s every chance that he might not get up again and all the relationships he’s managed to forge and rebuild will amount to no more than a lonely goodbye.
And then the fight starts and as Balboa walks to the ring built like a tank but all grizzled as hell with the strains of Frank Sinatra’s “High Hopes” good naturedly stripping what little ego Rocky has, he starts a bout virtually devoid of explosive punching sound effects or exaggerated melodrama where his aim isn’t to win, but to merely leave the arena on his feet with respect.
Even if you haven’t seen any of the previous movies, you’ll still end up as personally invested as if Rocky was actually one of your friends; and if you ARE a fan, then the film is a mournful, yet uplifting return to form for cinema’s greatest pugilist. 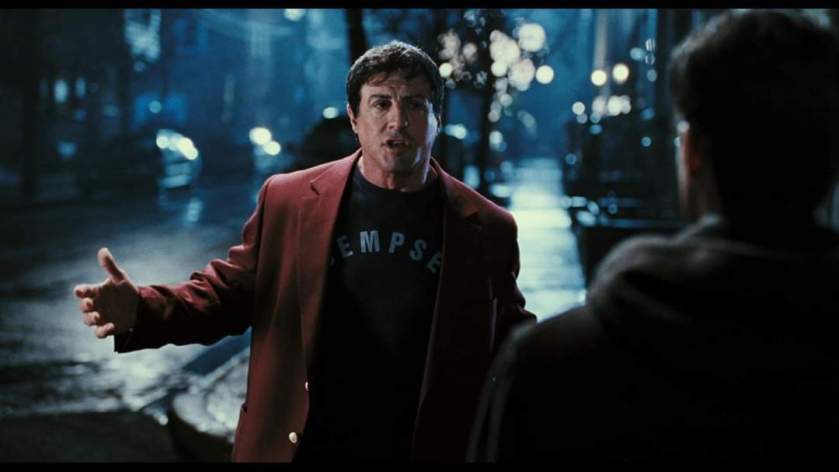 As the man himself says, “It ain’t over till it’s over.” and they say the last thing to go is a boxer’s punch. Rocky Balboa proves this all the way up until the final bell.