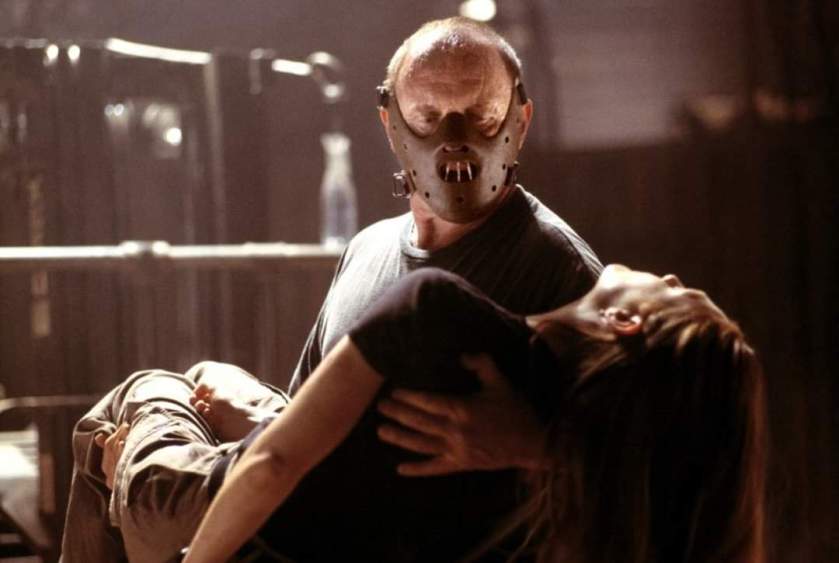 Following up Silence Of The Lambs was always going to be a fool’s errand (in BOTH book and movie form) and yet how could Hollywood resist the lurid lure of further adventures featuring the Oscar winning cannibal antics of one Hannibal Lector?
Coming one full decade after the sublime adaptation of Thomas Harris’ second Lector book (the first being Red Dragon), Hannibal was mired straight out the gate with some behind the scenes niggles from the start – the first being that Harris’ source novel is, to be blunt, a bit shit. Plodding, overlong and containing an ending that probably satisfied no one but Lector himself, this led to the movie’s significant second issue – that Jodie Foster had no intention to return as dogged FBI agent Clarice Starling. That someone does not want to return to the role that won them an Oscar kind of speaks volumes for the material but in the plus column, directorial chores were snagged by one of cinema’s greatest living visualists; Ridley Scott, who was enjoying a career resurgence thanks to the sand & sandals, modern epic: Gladiator. Let us not forget either that Anthony Hopkins was returning to possibly his most famous role and heading a literal all star cast – a lavish production for what amounts to a sprawling horror/thriller.
So everything turned out alright, yeah? Despite those early issues, Hannibal went on to continue to chow down on the public consciousness and all was well, right? Well… not really.
It’s been 10 years since cannibalistic psychiatrist Dr. Hannibal Lector literally “faced off-ed” with his captors and escaped captivity for a life of calm, culture and consuming the rude but unbeknownst to him, his only surviving victim has revenge on his mind. Wealthy pedophile Mason Verger has directed large portions of his cash into creating a suitable punishment for the not so good doctor that bizarrely involves giant flesh-eating pigs but it’s all for naught if he can’t find him first. A drawling mass of scar tissue that barks his sadistic orders from an electric wheelchair, Mason realizes that the only way to make an alpha predator surface is to apply the necessary bait and this leads him to Clarice Starling. A decade after the Buffalo Bill case made her name, Starling is still struggling to make progress in her career due to the staggering sexism that bars her progress every step of the way and a botched drugs sting that results in a very bloody and very public shootout pretty much proves to be the final nail in the coffin. Hounded by corrupt justice department offical Paul Krendler (an astounding piece of shit who bears a grudge against Starling for rebuffing his advances years earlier) under the orders of Verger, they try to hang her out to dry in order to see if they can get Lector to contact her and contact her he does.
Working under the name of Dr. Fell and working as an assistant curator in Rome, Lector has his own problems as a disgraced detective has his suspicions about Fell’s notorious true identity and has contacted Verger about the sizable reward he has offered for details that may lead to the capture of one of the FBI’s most wanted. As Starling, Lector and various other players all gradually converge on each other, the stage is set for some fairly gruesome ramifications and a climax that redefines the term “brain food”. 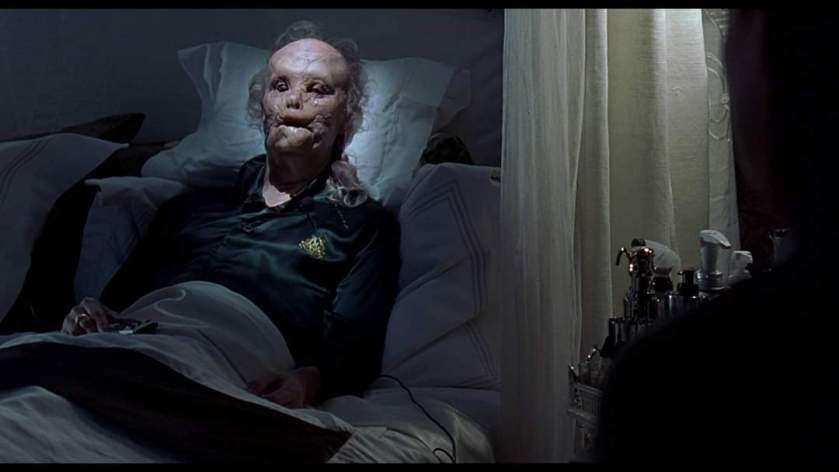 Upon reviewing Hannibal, it’s kind of difficult to try and work out what exactly the filmmakers were shooting for, this may possibly be because with all the chops and changes to cast and script behind the scenes it’s more than likely they wasnt sure what they were shooting for. The movie certainly is a muddled beast where the machinations used to plonk the characters are somewhat clumsy and plodding. I really don’t want to keep comparing Hannibal to Silence Of The Lambs but where the later was almost Hitchcockian in the way in maneuvered it’s pieces, Ridley Scott’s film aimlessly shoves them around trying to get the various bits to fit. If Silence is an elaborate game of chess, Hannibal is a drunken game of snap.
Even the central characters don’t spark as well with the hinted romance of the pairing of Hopkins and Foster (Romeo & Who-He-Ate, anyone?) falling flat as even the hugely capable Julianne Moore struggles to fill the void. It seems that a Hannibal Lector, roaming free and able to dine on as many free-range humans as he wishes, is nowhere near as scary as the incarcerated version.
However, to give the devil his due, Hannibal avoids being a total loss oddly thanks to Scott deciding to go full hardcore with some of the grand guignol imagery dripping from the pages of Thomas Harris’ sizable tome. You may cringe and turn away from such sights as Lector hanging someone after spilling his bowels with a scalpel or, in the film’s showstopping moment, actually carving out, cooking and serving one poor sod bits of his own brain (Human Remains Of The Day, anyone?) but the camera sure doesn’t, drinking in all the grue it can. Scott is no stranger to the perversely gruesome – after all, he is the man who gave us, among other things, Alien’s chest burster and The Counsellor’s decapitation device – but one of cinema’s most successful serial killers going all Hell’s Kitchen on the contents of a man’s skull may take the cake.
Another thing the movie gets right is realising the movie’s other grotesque character in that of the ravaged malevolent form of Mason Verger. Performed by a virtually entombed Gary Oldman, Verger proves to be horrifically entertaining and easily sits wheelchair to shoulder with the other members of Harris’ rogue’s gallery of secondary monsters such as Francis “The Tooth Fairy” Dollarhide and Jame “Buffalo Bill” Gumb. 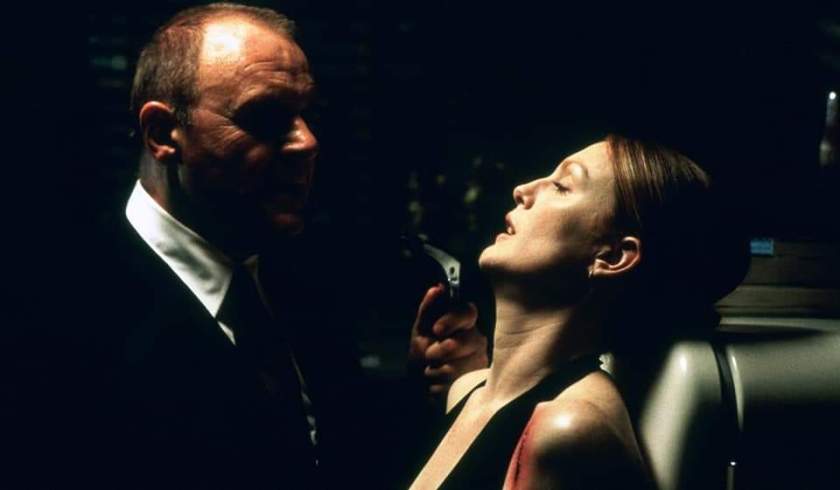 A lush, gory mess, Hannibal isn’t completely without merit but if you really want to keep up with popular culture’s most scary psychiatrist, you would be far better served by sticking with the three seasons of Bryan Fuller’s magnificent Hannibal TV series that does the admittedly wonky source novel far better. Ultimately, while it may prove to be fairly hard to stomach, Hannibal ironically is also pretty hard to swallow.
🌟🌟🌟