One of the most solidly, unashamedly blue-collar sub-genre in film is that of the buddy comedy. Almost a legitimate genre in it’s own right the formula of two opposite personalities unwilling banded together while they trade first barbs, then respect has been grafted to many a movie over the years and is a regular fall back for both Pixar and the works of Shane Black (Christ, virtually everything he’s done involves an impossibly witty bromance). We all know of the classics – Lethal Weapon instantly explodes to mind – but every now and then a stone cold work of genius comes along that somehow falls between the cracks. Ladies and gentlemen, allow me to re-introduce you to Midnight Run; a magnificent example of the sub-genre that came out only one year after the introduction of Riggs and Murtaugh took it’s bow.

Jack Walsh is a former cop and a current, hard bitten, two fisted bounty hunter who attacks his job with a grumpy, humourless exuberance that pretty much guarantees results. Of course, Jack fucking loathes his job and is desperately saving to retire from this life that demands he surrounds himself with lying, stealing, scumbags – and THAT’S just the people he works for – but into the picture walks Jonathan Mardukas (a.k.a The Duke), a mellow mob accountant who embezzled his bosses and gave the money to charity when he discovered who he actually worked for. While noble, this Robin Hood style act of kindness has unsurprisingly left a bulleye on his head the size of a trash can lid and in an effort to make a run for it he has vanished, skipping out on a sizable bail that would make Walsh’s slimy boss bankrupt. Hired to bring The Duke back for a fee that would finance his dreams of opening a coffee shop, Jack has five days to locate his bounty and bring him back to LA or his boss defaults but manages to track him down fairly easily in New York. All Jack has to do is get The Duke on an overnight flight (the Midnight Run of the title) but as this is a buddy movie, things would be quite boring if the mild mannered Mardukas actually came quietly so after causing a massive scene on the plane due to a fear of flying he may or may not be bullshitting about, Jack has to organize alternate transportation and thus sets in motion a hugely convoluted chain of events that involves numerous characters wanting to snag the accountant for various reasons.
Agent Alonzo Mosley of the FBI wants The Duke for information about the Mob, the Mob wants to silence his mouth before that happens, rival bounty hunter Marvin has been put on his trail by Jack’s boss as extra insurance and Jack himself is desperately trying to stay ahead of them all in order to get his money, but the big hearted Mardukas isn’t planning on making it easy on any of them, making Jack’s job progressively harder while actively trying to better his life; can these two ever hope to bond and manage to survive while countless farcical events are exploding all around them – especially when Jack finds The Duke excruciatingly annoying?

For a movie that’s essentially about two guys on the run against a ticking clock Midnight Run admirably takes somewhat of a languid, casual pace, letting the fast paced, rat-ta-tat dialogue set the beat over screeching tyres and booming gunfire (although there’s still a lot of that). That comes from the confidence that comes from having an incredibly solid script that has lots of fun dumping it’s supporting characters into a blender and then randomly launching them at the two long suffering heroes while also letting them get in each OTHERS way too.
The actors rise to meet the script wonderfully with Charles Grodin (best known as the dad from Beethoven because God is obviously dead) making the annoying Duke not actually annoying with his highly inquisitive patter while a long list of character actors, including Joe Pantoliano and Dennis Farina – no doubt chosen for their magnificent and numerous delivery of the F word – populate the other roles, but the real marvel here is Robert De Niro. Going though a period of his career where his choice of role could hardly be considered “light” (Goodfellas, The Mission and The Untouchables are all movies that surround Midnight Run in the actor’s resumé), old Bobby cuts quite the action hero which shows of his comic timing long before he started banging on about nipples in Meet The Parents. While it shouldn’t be that much of a shock that a man regularly described as the world’s greatest living actor is equally proficient at spitting caustic wisecracks at mob mooks and FBI goons (led by an awesomely poker-faced Yaphet Koto) while ducking gunfire and arguing with the other half of his double act but you can’t help but consider it a shame that he didn’t do more movies along the same lines.
If the film falters any it’s maybe because the film may be a little too relaxed for a viewer that’s used to a more fast paced romp (even though the script is tight, it’s VERY talky) and there’s precious little actual threat involved with the ultimate fate of our two heroes never in doubt for a single solitary second. 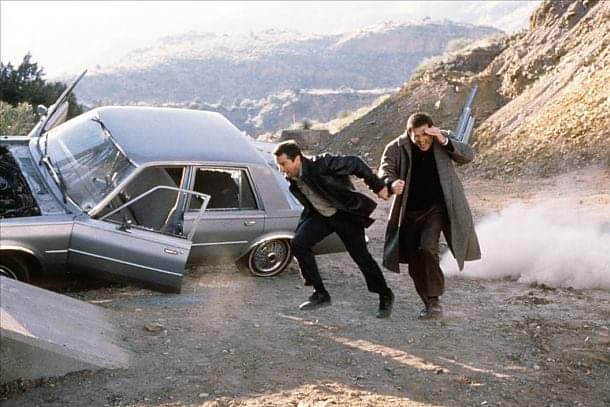 That being said, Midnight Run is simply a damn good story simply told (director Martin Brest was no stranger to motor-mouthed action due to him helming Beverley Hills Cop), utterly loaded with killer zingers and is a criminally overlooked entry in the genre of 80’s action comedy.
Buddy good.
🌟🌟🌟🌟