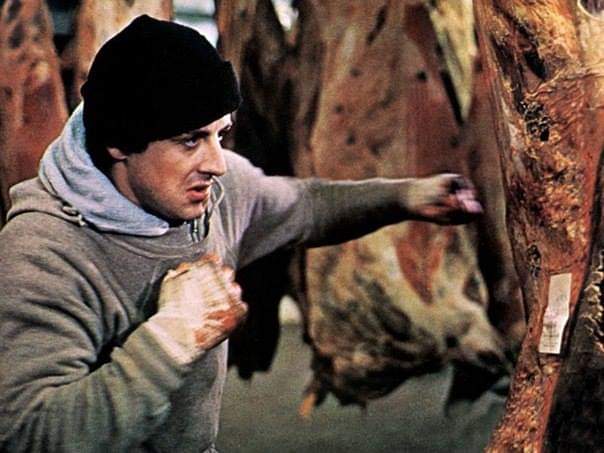 Regardless of which sport manages to float your boat (including boating), surely the most cinematic sport of them all must surely be boxing: a literal one on one fight where skill, brawn and out and out toughness are measured inside the ring where a braying – and possibly drunk, high or chain smoking – crowd demand to see blood from the sweating gladiators. A brutal sport; yes, undeniably so but under the non-judgemental eye of the lens of cinema it can be achingly beautiful and heart wrenchingly poignant.
The smart money usually goes to Martin Scorsese’s Raging Bull, the classic biopic which detailed the self inflicted tail-spin of a man whose greatest opponent is himself, but I personally have found this masterpiece somewhat as a glass half empty experience. I like my sports flicks to be uplifting and generally positive affairs (tough to do when people in vests are yelling “did you fuck my wife” at each other), in other words I need a protagonist to be a glass half full kinda guy. A guy I can get behind. A guy like Rocky Balboa.
Scraping a living together by making money collections for a loan shark, Robert “Rocky” Balboa’s true passion is for boxing but pickings are slim in 1976 Philadelphia (which frequently appears as if a bomb has just hit it but nobody noticed) and the small-time bouts he participates in are scrappy and dangerous with the odd illeagal headbutt frequently thrown in amongst the hooks and jabs.
However Rocky tries not to let his miserable, working class existence dull his kind and big hearted personality and he begins to woo Adrian, the painfully shy sister to his abusive friend, Paulie.
Meanwhile, the magnificently flamboyant heavyweight champion of the world, Apollo Creed, is in a bit of a bind as the opponent to his next title defence has dropped out but ever the opportunist, Creed hatches a plan. As the bout is due to take place in Philadelphia on the United States bicentennial, he reasons that the gimmick of plucking an unknown fighter out of nowhere and giving him a title shot is going to be sensational for business and so Rocky, picked for his nickname “The Italian Stallion”, is hurled into the limelight and the biggest fight of his life.
Trained by a curmudgeonly old pug called Micky (Burgess Meridith bellowing like his life depends on it) Rocky begins an underdog journey like no other as he aims to not just obtain the title from an obviously superior opponent, but to grasp for a sliver of self respect. Cue training montage. 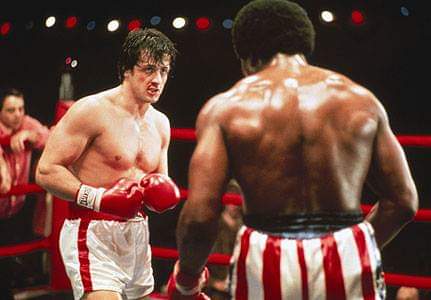 Rocky’s story may well be the most overused to the genre of the sporting movie (there’s more cliches and rules abound than a damn slasher film) but way back in 1976, the movie that placed Sylvester Stallone firmly on the map was incredibly fresh and new. This was, in many ways, Stallone didn’t just portray Balboa, he WAS Balboa; and not in a method actor kind of way either. Stallone at the early point in his career was choking on desperate and knew the sort of life Rocky was stuck in, hence why he himself wrote the script first place, basing it on his experiences struggling in Hollywood. It’s a remarkable blurring of the lines between actor and character and it’s been a staple of both Stallone’s and Balboa’s respective careers that they mirror themselves so closely – even today.
But like the instantly loveable face pounder, Rocky is a hugely relatable piece of work that tugs on the heartstrings with genuine warmth, that’s an impressive feat for anyone, let alone the man who wrote Cobra and the fact that the film makes you utterly invested in it’s characters plight without you even realising it is a major achievement.
Think I’m giving the scripter of all three Expendables movies a little too much credit then consider the scene where Rocky confesses to Adrian that he knows he can’t possibly defeat Apollo Creed the night BEFORE the fight. Up to this point, his courting of Adrian has been thoroughly sweet and his training (featuring THAT theme) has been utterly iconic, but this burst of humanity and doubt at the zero hour – kicked off by him realising that no one expects him to do well after noticing the design of his boxing shorts is incorrect on a poster – mean that when the opening bell finally sounds, your gut drops into your shoes and you realise that you REALLY care about this guy.
Surrounded by fantastic talent spear headed by Talia Shire’s seemingly fragile Adrian who becomes Rocky’s err… rock and the glorious Carl Weathers as the verbose Creed, Stallone has flawless support, but this, in every sense of the word, is Stallone’s movie and you’re with him every step of the way as his story concludes (until the next one) with him aiming not for the world title that is utterly out if his reach, but for the respect that merely going the distance will give him.
Effortlessly iconic, the memorable moment come quicker than a flurry of punches; Rocky training by pounding a beef carcass, the ice skating date, the wince inducing “Cut me, Mick!”, the celebration at the top of the steps of the Philadelphia Museum of Art, the SCORE; but none of these hit harder than the movie’s final lines where a bloodied Balboa (sporting eyes so swollen you’d swear he’d been boxing a swarm of murder-wasps for 15 rounds) and a tearful Adrian proclaim their love for one another amid the after match pandemonium is one of the all time great “I love you’s” in cinema history. 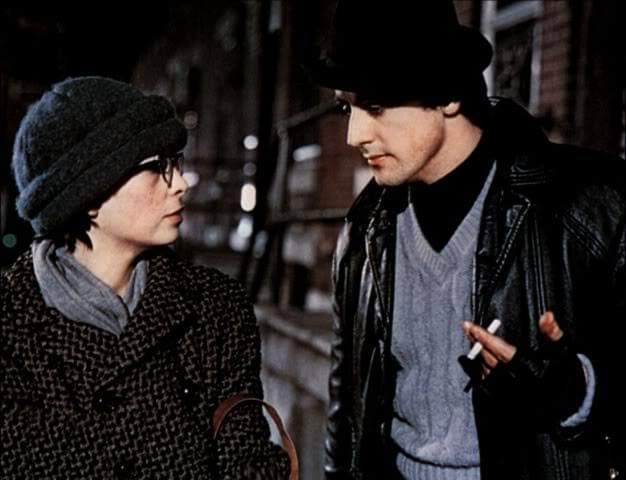