When they focus on matters other than beheadings and bloodshed the horror genre may be the most politically charged type of movie out there (aside from actual political thriller, I guess). From the social commentary of auteurs as diverse as George A. Romero and Jordan Peel to the wealth of modern titles being released by Blumhouse seemingly every other month; a sure fire way to stealthily jab a sharp implement into the ribs of whatever hot button issue that’s raised it’s head at the time is horror movie. A lot of the titles I’ve skimmed over are common knowledge, but one that’s faded away over the years is a muddled little movie known as C.H.U.D, who decided to tackle the twin urban plights of the homeless and environmental pollution in a movie about mutated hobos eating people.
The amount of missing persons mounting particular section of Manhattan is starting to get noticed as if the world is opening up and swallowing people and various people from different walks of life have started noticing. First of these is police Captain Bosch, not entirely unsurprising considering one of the missing persons is his wife – although I have to say, if you walk your dog at midnight though 1980’s New York, getting yanked down a manhole by a ravenous, bug-eyed flesh eater is probably one of the better scenarios to happen to you. Another is terminally sarcastic fashion photographer George Cooper who recently made a name for himself thanks to a photo piece about the Big Apple’s resident vagrants and whom are contacting him in order to request weapons to defend themselves from a mysterious threat. Finally, A.J., the owner of a soup kitchen, has noticed that all the homeless that choose to live under the city (as opposed to sleeping on the streets) haven’t been turning up recently and as he is by far the most paranoid of the three, immediately starts investigating.
Long story short, it seems The Big Apple has something festering at it’s core as the maze like tunnels that zig zag under the city has become infested by C.H.U.Ds, glowing eyed sub-creatures who’s rather awesome acronym stands for Cannibalistic Humanoid Underground Dwellers, which I think we can all agree is utterly fucking bad-ass. Sporting fangs, claws and necks so thick they wouldn’t look out of place dragging a truck in the World’s Strongest Man Competition, it turns out that thanks to an extraordinarily careless dumping of toxic waste by corrupt government officials, luckless members of the mole people community have mutated into these toothy bastards and started chowing down on anyone within reach of their lethal manicures and their surface attacks start to get ever more brazen. As our three disparate and desperate heroes try to get to the bottom of this conspiracy and find out what the OTHER meaning to C.H.U.D is (TWO meanings from one acronym? C.H.U.D really is the codename that just keeps giving) their lives are eventually put in mortal danger from threats both above and below ground. 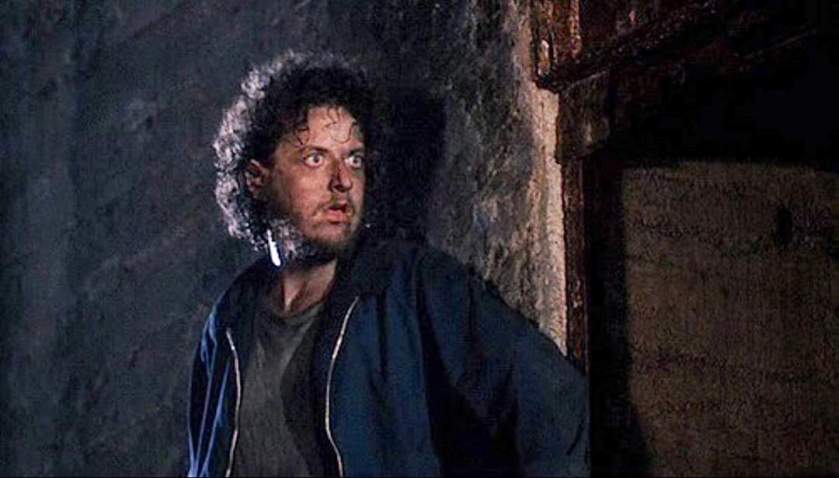 To be brutally honest, C.H.U.D, despite it’s genuinely admirable aims, really isn’t THAT great a movie and yet it’s concept is something that’s personally been a minor obsession of mine for years. I can’t quite explain it but whether it’s the cool VHS box art, the goofy-yet-awesome tag line (“They’re not staying down there anymore!”), the nifty concept or just the sheer mystery of settling down and watching something called C.H.U.D has always fascinated me. There’s truly aspects about this gritty little monster movie that is legitimately on to something and if the filmmakers had maybe a little more focus (or a lot more budget) that we could have had a minor masterpiece for the ages here. Fusing the kind of socially conscious plot with frankly barmy, B-movie shenanigans that’s usually associated with scripter Larry Cohen (The Stuff, Q: The Winged Serpent, Maniac Cop – Jesus, it’s even set in New York!) with virtually the exact same plot as 1980’s Alligator (Sarcastic politics involving a conspiracy which results in a voracious mutant flesh eater in the sewers?) C.H.U.D may not exactly be original but the raw bones of the story, in the right hands, could actually result in something I wouldn’t normally endorse – a cracking remake.
All the actors involved either grossly overact or underact to the point you assumed they must be drugged (Daniel Stern in particular holds himself like he drank WAY too much coffee before every take while alternatively, lead John Heard is unresponsive for most of the film) but it fits the general grungy style which ultimately proves to be the film’s saving grace. You see, genre films shot on the streets of New York during the 70’s and 80’s managed to achieve a sense of filthy authenticity you just couldn’t get in any other decade, be it the works of trash king Frank Helenlotter, William Lustig’s legitimately upsetting Maniac, or yes, C.H.U.D, there’s a realism that cuts through the melodramatic acting and rubbery creatures that you can taste at the back of your throat.
In fact the notion of creatures with evil intent scuttling around beneath your feet is such a potent one that even a film as disjointed as this manages to pull off some memorable scenes whether it’s a C.H.U.D boasting the rather random ability of having an extending neck (handy if you wanna cheat the photo-finish during the 100 meters sprint, I suppose) while facing off against a woman with a samurai sword or a swarm of C.H.U.D’s rudely interrupting the patrons of a diner (including a pre-famous John Goodman no less) but thanks to the low budget, even these scenes are frustratingly brief.
I mentioned earlier that C.H.U.D could actually benefit from a remake that could maybe explore what exactly it means to be a C.H.U.D as so much is glossed over due to the brief run time. At one point a group of the sweaty, orc-faced maniacs seem to be worshiping something that maybe the toxic waste that created them (technically giving them the same origin as the Ninja Turtles – but never mind that now) but it’s never explored, also a C.H.U.D redux could explore their abilities more (is that stretchy neck thing a one off or can all their limbs do that?) – I told you I was a little obsessed…
A great concept, somewhat let down by restricted filmmaking, C.H.U.D still should be given a pat on the squishy, malformed back for at least trying to have some sort of social relevance and as weird, off-putting cult movies go you could do far worse – unfortunately you could also do far better too (Lewis Teague’s aforementioned Alligator pulls off the same story – and some exact same scenarios – far better than this) but then not a lot of these kind of films get name dropped on The Simpsons…
“…and then the C.H.U.Ds came at me.” sadly reminisces Homer in the episode The City Of New York Versus Homer Simpson, to which Marge replies: “Of course you’ll have a bad impression of New York if you only focus on the Pimps and C.H.U.Ds.” 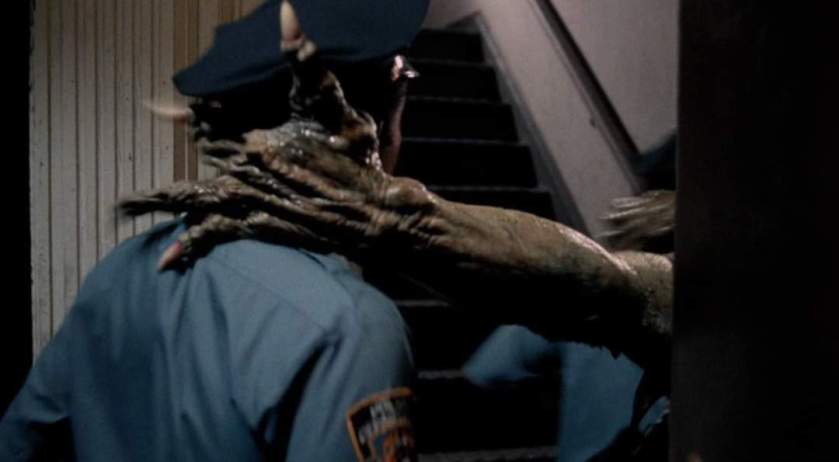 Marge may be right (she usually is) but at least it proves that I’m not the only C.H.U.D obsession – even if it is sort of underground…