There’s a wave of nostalgia that envelops certain movies that really fail to hold up when the cold, cruel light of modern day is shone directly into their blinking, confused eyes. Be it the fact that the plot or effects have become hopelessly dated as time has indifferently rumbled on or maybe it’s even the realisation that the film (whisper it) wasn’t really THAT good in the first place; it seems that a lot of 90’s blockbusters simply don’t have the staying power they once had.
Now, if you’re one of those people who has trouble excepting that the 90’s was THIRTY YEARS AGO, chances are you’re also clinging to the rather flawed knowledge that Roland Emmerich’s legendary 1996 destructo-epic, Independence Day (or the idiotic ID4 for all you syllable-phobes out there) is an awesomely perfect slice of cinematic sci-fi, but personally I’ve never been overly infatuated with it. Aggressively simplistic and loaded with so many other movie’s ideas that if it was enrolled in an English class it would be expelled for plagiarism, ID4 simply isn’t as hot-shit as you once may have thought… but then, it’s hardly the movie’s fault. (Personally, I blame Hans Zimmer)…. and my harsh coments doesn’t mean that I feel it’s completely devoid of value.
The good news is that man has now received conclusive proof of the existence of intelligent life exists from beyond the stars; the bad news is that proof has taken the form of huge, intimidating alien spacecraft hovering over all the major cities of the world. As the world reacts in very different ways, we trace the various stories of people dealing with this new normal – floundering President Thomas Whitmore finds he has a unique situation on his hands, fighter pilot Steven Hiller is trying to settle down with his stripper girlfriend and her son, redneck crop duster Russell Casse is a full blown alcoholic after an alleged alien abduction years before and super intelligent, but underachieving, satellite technician David Levinson believes he has cracked a secret code being beamed from ship to ship and it looks suspiciously like a countdown. With his fussing father in tow, David races to White House where his ex-wife works in order to relay this trouser-filling news to the President and sure enough, once the countdown ends the spaceships unleash their devastating fire power on every city leaving them all strongly resembling a fireblasted dumpster from the Philippines.
As Hiller is drafted in for an unsuccessful counter attack he manages to down one of the seemingly indestructible fighter craft and takes it’s spindly, tentacled, alien ass prisoner and all the surviving characters slowly converge on one of the few remaining bases in the country that isn’t a smoldering crater: Area 51 in Nevada. As David cracks the alien’s technology and President Whitmore manages to discover what they want (us dead unsurprisingly), a complicated, all-or-nothing final plan is constructed to bring these extra-terrestrial bastards down but does this plucky gaggle of character actors really have a chance at victory against such poorly plotted odds? 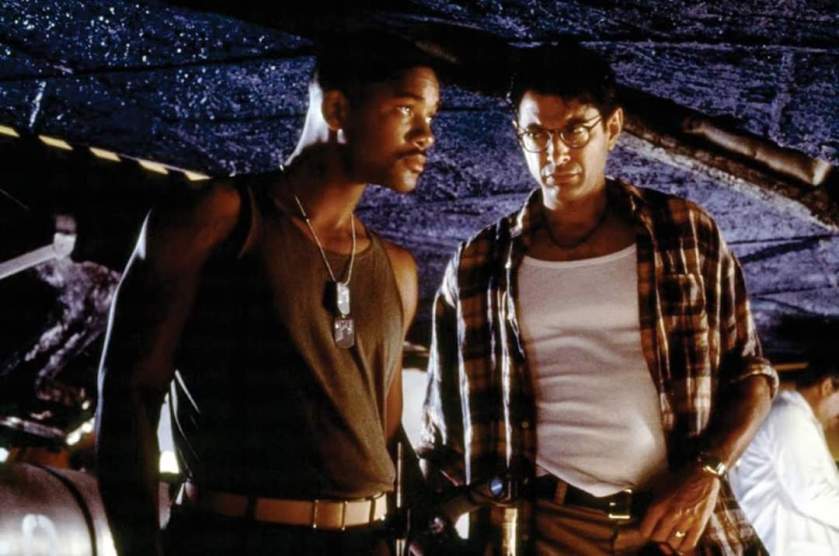 Let me clarify that Hans Zimmer comment I made in my opening and maybe you’ll see why my stance against Independence Day is so negative. Much like 34% of all trailers made after 1995, the ID4 trailer came armed with Zimmer’s main theme from Tony Scott’s submarine masterpiece Crimson Tide, a stern, militaristic piece that gave me the illusion that this movie featuring a full scale invasion from Outer space was going to be more hard-edged than it turned out to be (think tonally more M. Night Shyamalan’s Signs or Spielberg’s War Of The Worlds remake), so imagine my disappointment when this frothy slice of extreme patriotism unspooled in front of my eyes…
That being said, what Independence Day does, it does well and to a consistent silly standard. Instead of opting to go full Steven Spielberg or James Cameron with the proceedings, Emmerich instead interestingly chooses to scribble copious notes from the distaster movie blueprint laid down by the legendary Irwin Allen (producer of such bodycount supplying epics such as The Poseidon Adventure and The Towering Inferno) and proceeds to bash them all out to the letter.
Ticking of the boxes feverishly as he goes, our Roland includes such cliches such as a starry cast, a disparate and interspersed group of characters and so much obvious, doom-laden foreshadowing you feel the film should be walking around wearing a sandwich board reading: The End Is Nigh. In fact, SO obvious is the foreshadowing that it chooses to have ACTUAL SHADOWS as the massive spaceships blot out the sun.
It’s a good thing, then, that despite the super on-the-nose nature of the first third, it proves to be the most effective as the direct effects of this VERY close encounter twinned with the mysterious countdown unearthed by David quickens the pulse as every fibre of our being is waiting for the inevitable space-shit to go down. Man’s footprints on the surface of the moon are erased by the rumbling of the mothership doing a fly by, huge UFO’s roughly the size of Godzilla’s yoga mat drape national monuments in shade as they hover overhead and numerous characters turn their heads toward camera and say nutsack tightening things like “But a countdown to what…?” and “Checkmate” in enigmatic ways.
Then, eventually, we get the payoff, and WHAT a payoff it is as the alien craft discharge their explosive loads (phrasing!) into various national monuments causing walls of flame the size of skyscrapers to surge out in every direction, flipping cars like dominos and eradicating any poor sap unlucky enough to be in it’s path. It was scale of biblical destruction the likes of which cinema goers had never seen before and still manages to carry some impressive heft today but it’s also unfortunately where the movie starts to run out of steam.
As the movie plots on you start to get suspicious of whether Emmerich and co-writer/producer Dean Devlin actually knows the difference between homage and out and out rip off as whole chunks of the story feels swiped from somewhere else. The whole climax, for example, is literally a “How To Stage A Final Battle” PSA straight from Return Of The Jedi, right down to all the heroes being split either between being on board the mountainous mothership, engaging in a massive aerial dogfight, or scrabbling around on the planet’s surface avoiding explosions – and it doesn’t end there…
So many other films are referenced, namechecked or just completely strip-mined that to play Rip-off Bingo with a screening of ID4 would require a bingo card the size of a giant novelty check – the very image of a major city being dwarfed by a saucer-like craft was the whole basis of the 80’s TV show V for God’s sake! Didn’t Emmerich think anyone would remember!?
Also impressive in their size and number is the painfully obvious plot holes that are simply impossible to ignore: We’re supposed to buy that David’s Apple Mac is compatible with alien technology? Really? Why on earth is the alien death cannon S.O.O.O. S.L.O.O.O.W…? Why did Emmerich think we wouldn’t notice that he ripped off the alien-staring-at-a-nuke payoff from his own movie Stargate (a far better movie)?
So how is this absurd slice of cinematic patriotism even remotely taken seriously?
For a start, the vast and varied cast make it work (Will Smith AND Jeff Goldblum in the same movie? Surely the charisma alone would be enough to make the aliens crash their ships into terra firmer) and wring a nice goofy charm out of the script (NOT you, Randy Quaid!) and when ID4 dedicates itself to something actually original it effortlessly excites. I’ve already mentioned the legitimately classic fire wall scene (the White House detonating like it’s a faulty oil refinery is a truely timeless image) but Smith’s Hiller playing a white knuckle game of follow-the-leader as one of the alien fighters chases his jet through the zig zaging chasms of the Grand Canyon also brings forth gasps of joy and goosebumps in among the cringey speeches and audience manipulating deaths.
In closing, I’ve finally made my peace with this movie over the years and have learned to watch it as the filmmakers have presumably intended (a goofy action adventure with all the seriousness of an episode of Paw Patrol) but it certainly isn’t the towering example of summer escapism the clanking hype machine announced it to be at the time. 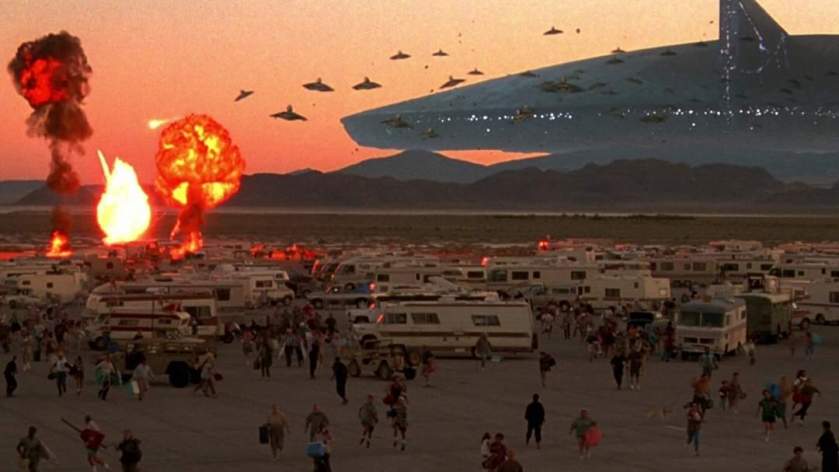