Steven Spielberg is rightly credited as birthing the modern blockbuster with the release of his toothy masterpiece Jaws, a film I personally hold as the absolute GOAT. However, you know what eats goats? A bloody great T-Rex, that’s what.
Many flawless examples of the box-office conquering summer movie exist; Star Wars, Terminator 2, The Avengers and The Dark Knight are only a few – but if I had to pick just one movie to represent the quintessential example of the summer blockbuster, it’s gonna have to be Jurassic Park.
Stomping into town with remarkably good credentials (insanely high concept, Michael Crichton source novel, state of the art effects, FUCKING DINOSAURS) Spielberg crams scientific ethics, a ridiculously simplistic crash course in DNA gene splicing, a sense of childlike wonder and some of the most vicious attack sequences in a family movie since Chrisse Watkins fancied taking an I’ll advised skinny dip on Amity Island…

Eccentric, cuddly, entrepreneur John Hammond arrives at an archeological dig in order to enlist the aid of paleontologist Alan Grant and his paleobotanist girlfriend Ellie Sattler to give their endorsement on a secret and unique biological preserve he’s bankrolled using cutting edge science to realise. They agree, because they’re nice like that – plus the extra grant money helps, and soon they are on route to Isla Nublar where they join with Ian Malcolm a jazzy, funky, Jeff Goldblum-esque mathematician (played by guess who…) and Hammond’s shifty lawyer who are all invited for the same reason.
It turns out that Hammond and his scientific flunkies have managed to harvest dinosaur DNA and have used bleeding edge sciencey stuff to actually bring these titanic lizards back from extinction-town in the form of a saurian safari and after glimpsing their first dino the group are predictably enraptured. However, shit starts to go sour with the triple threat of the experts showing moral doubts over the park, a rapidly advancing tropical rain storm AND, most worryingly, the orchestrated shutdown of all the security systems thanks to a DNA stealing tech expert (To be fair, when you hire Newman from Seinfeld to be your IT guy you kind of get what you deserve…) and the party (including Hammond’s two precocious grandchildren) are stranded in possibly one of the most dangerous places on earth. A powered down T-Rex paddock.
Starting with the spectacular breakout of one of histories most notorious alpha predators and ending with an assault from a trio of lethally intelligent Velociraptors, everyone left on the island gets separated and has to try and use their wits to survive the night against 65 million years worth of vicious bitey intinct in order to make it to the escape copter the next day. Even with a dino expert like Grant in the fold, can anyone hope to live through this particular dino crisis?

After nearly 20 years of redefining and upping the ante of cinema, Jurassic Park finds our beloved Señor Spielbergo at the top of his game and gifted with not only ILM’s stellar effects (which stunningly still hold up today) but full sized animatronic creatures provided by the late, great Stan Winston. Shifting expertly between the two you’d think that the director would be content to let the effects do the heavy lifting but instead utilizes a plethora of cinematic tricks (a footfall rippling the water in a cup here and a well-timed snort fogging up a pane of glass there) in order to make the already exemplary Dino work that much more alive. It also doesn’t hurt that Spielberg’s gradual unveiling of his breathtaking attraction is so masterful; an old master at the top of his game he drip feeds us a glaring eye or a whipping tail before wheeling out the herbivores to enrapture us with this brave and very scaley new world. Once we’ve absorbed the sight of a grazing Brachiosaur and fell in love with a poorly Triceratops, the mastrero then gives us what we paid to see and the film gear shifts into a fusion of Indiana Jones style derring do and the suprisingly violent and chewy intensity of Jaws. While stopping way short of witnessing a dinosaur crapping outcast partially digested character actor, Jurassic Park sure doesn’t pull any punches when it crunches down on the more expendable members of the cast and each demise is memorable (Toilet kill! Severed arm! “Clever Girl”!) and enjoyably traumatic. The initial T-Rex attack may be the single greatest set-piece ever seen in a motion picture since time began – or it would be if the movie didn’t ALSO contain a truly gut-clenching game of cat and mouse in a kitchen between the two kids and a duo of stalking Velociraptors.
It helps substantially that the leads are so incredibly likeable with Sam Neill in particular relishing playing Grant as a child hating, techno-phobic grouch who isn’t above casually traumatizing any punk kid who dares to disrespect his beloved dinosaurs. As if to balance it out, Jeff Goldum’s leather jacketed, chaos theory obsessed Malcolm goes down as smooth as a sip of stuttering Bailey’s and the image of him reclining, injured, looking oddly sultry with his chest on show single handedly launched a million memes. In comparison Laura Dern’s Ellie Sattler could have been in danger of being overshadowed but instead she brings a plucky yet tenacious sensibility to her hugely positive character, even when her arms are buried up to the elbows in triceratops shit…
Aside from the thrills and spills, the film cheekily seems to be riffing on it’s own impact on cinematic culture, an oddly meta commentary that’s utterly fascinating considering the damn thing hadn’t even been released yet! Ian Malcolm’s rant about taking something beautiful (read: nature) and slapping it on a lunchbox could also easily be interpreted as a shot at the movie’s own hype that swept across the world like a heard of hysterical Gallimimus and the constant opinion that hurling dinos back into the food chain shows a horrific lack of respect for the world around us could also be aimed at the movie finally nailing lifelike CGI for the masses. “Your scientists were so preoccupied with whether or not they could, they didn’t stop to think if they should.” sternly lectures Malcolm, presumably envisioning the vast amount of future blockbusters scrabbling to overuse this new technology in many, much more soulless, variations. 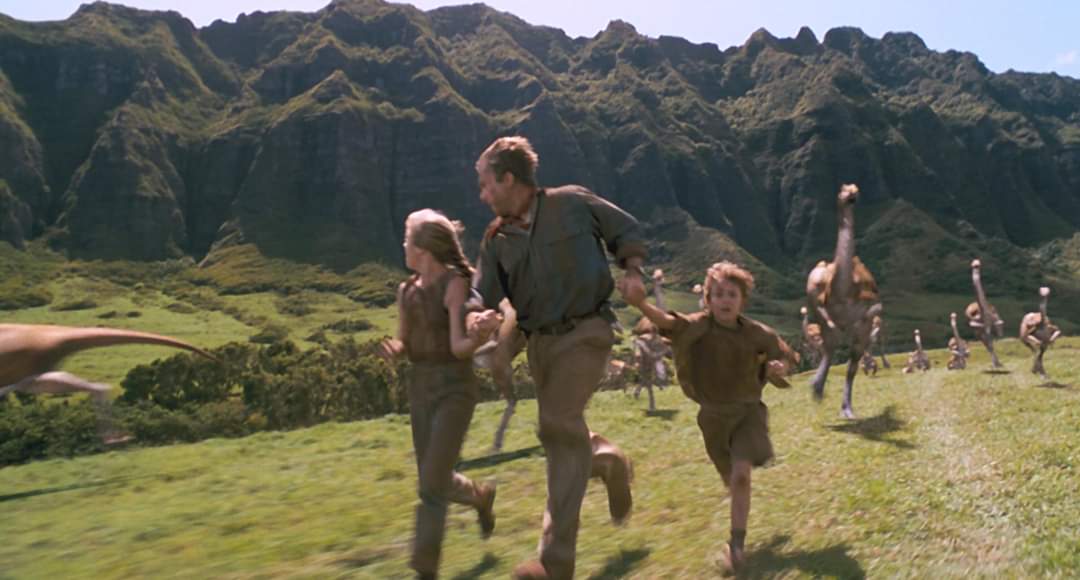 A legitimate classic whichever way you look at it (even the kid characters aren’t annoying despite a massively unsubtle computer hacking sequence) Jurassic Park is prime level entertainment and a masterpiece in iconic movie making.
Jurassic Peak.