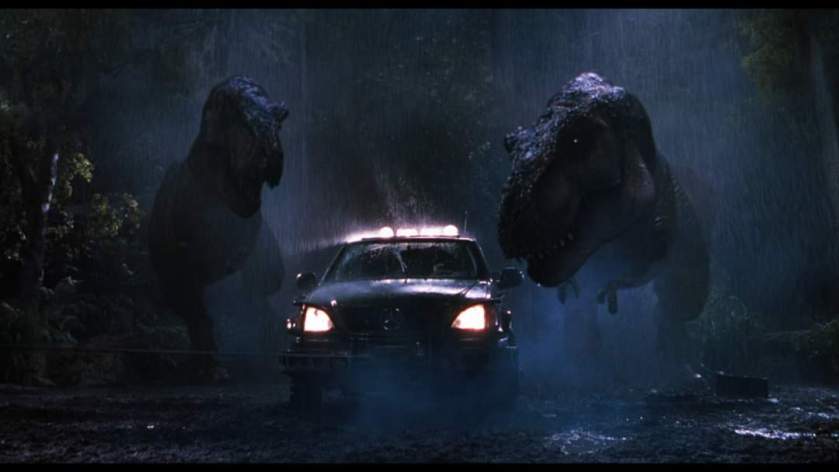 If you ever needed an example of how truly brilliant Steven Spielberg is you would have to look no further than 1993.
Why is that year so important, you ask? Simple, because that is the year that he managed to release not just Jurassic Park, but Schindler’s List as well – two films that couldn’t be any more different if you tried (unless I missed the scene where two Nazi’s stalked a couple of children through a kitchen or Ralph Fiennes ate a man clean off the toilet…).
If the relevance of this fact eludes you, let me explain further: if you were to look at the time line, that would mean that Spielberg was in pre-production for Schindler’s AT THE EXACT SAME TIME while he was in post for his blockbuster dinosaur opus – an act of versatility that allowed him to create one of the greatest action adventure blockbusters of all time and a harrowing Oscar winner about the Holocaust almost simultaneously. Whichever way you look at it, it’s an awe inspiring achievement that’s only made more impressive when compared to the next time the legendary director tried it; which, to be honest, wasn’t anywhere near as successful.
In 1997 the director managed to muscle out the double bill of The Lost World: Jurassic Park and slave drama Amistad and in doing so is finally managed to over-stretch himself into putting out a sequel that isn’t what you’d call dino-mite but certainly isn’t what you’d call dino-shite either…
Four years after the genetically re-created thunder lizards broke out from their state of the art zoo and crunched down on some unlucky employees, funky mathematician and T-Rex survivor Ian Malcolm is summoned to see the ailing park creator John Hammond. It’s seems John has a dirty little secret that is just about to go public: Site-B. Based on another island and acting as the staging area for the beginnings of what became Jurassic Park, it’s cover has been blown by a family stumbling across it on a yachting trip (typical: rich and white and they think they can have a picnic wherever they please…) and if something isn’t done soon it’ll be open season on dino DNA.
Hammond requests that Malcolm join a team in order to launch a fact finding expedition in order to claim these creatures as a protected species but instead of playing Steve Irwin to a horde of prehistoric animals, Ian intelligently declines on the grounds that he has no interest on seeing what the inside of a Tyranosaur’s gullet looks like. However, upon discovering that his paleontologist girlfriend Sarah is not only part of the team, but has already been on the island for a couple of DAYS, Ian changes his mind. Upon reaching the Land That Common Sense Forgot, the rag-tag group experience some varying degrees of fortune in rapid secession, the good news is that they find Sarah pretty quick, the bad news is that Ian’s ypung daughter from a previous relationship has stowed away with them. However, the WORST news is that In-Gen, the company that created the dinosaurs, is now run by Hammond’s scruple-free nephew and he has deemed Site-B prime real estate to strip-mine to financially save the business and has unleashed a small army of mercenaries and big game hunters to round up and imprison every overgrown lizard that they can find.
As these two teams with VERY different goals butt heads, both warring parties eventually have to team up after their respective experiences with the island’s lethal inhabitants leaves them all effectively stranded. With no choice but to hike to the centre of the island and radio for help from the decrepit, Velociraptor infested compound, the survivors try to avoid become squishy bits inbetween the teeth of snarling lizards of all shapes and sizes… 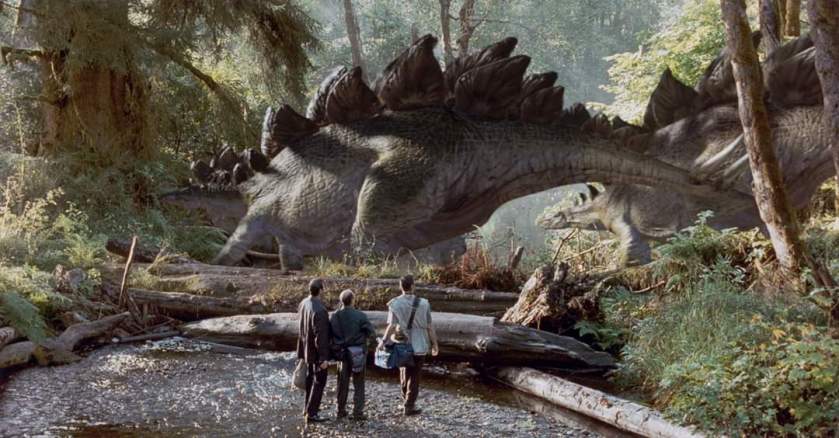 As I mentioned at the top of this review, film director extraordinaire Steven Spielberg didn’t really have his whole attention focused on the this production and at times had to direct actors via satellite; somewhat of a novel method as technically he’s literally being paid to phone it in. Unfortunately it shows as The Lost World, despite having it sights on being a nastier, darker sequel, is also suprisingly unfocused and noticably episodic, two elements that can only have been caused by the auteur frequently taking his eye off the ball.
To be fair, if anyone else was to make a movie under such conditions it would most likely turn out virtually unwatchable but somehow the director manages to make it work although the finished product feels less like vintage Spielberg and note like one of his more talented imitators.
That being said, there’s still flashes of that old Spielberg brilliance in there that erupt from the bushes before you even have the chance to mutter “clever girl”, the most noticable of which is an ingeniously tense extended sequence which starts with the characters played by Julianne Moore and Vince Vaughn (both somewhat criminally under utilized) invoking the bitey ire of a mama and papa T-Rex while they frantically try to help the wounded, wailing offspring. After the Rex family rudely trash the massive R.V. our heroes are cringing within they leave the vehicle dangling over the edge of a jagged precipice (rather naturally considering they’re dagger fanged alpha predators) and we’re treated to a remarkable sequence where Moore ends up sprawled across a window that’s the only thing stopping her from tumbling into the void. Insidious little spiderwebs of cracking glass spread out from her fingers as the window threatens to give way at any second and the tension is so thick, cutting it with a knife isn’t so much an option as you’d have to cleave it in half with a fire axe. If THAT isn’t enough, when aid finally comes the teetering vehicle still has to be secured with a typically complicated spinning plate act where different ropes come loose and have to be tightened – it’s breathless, darkly funny and hits the thill-a-minute sweet spot in a way the rest of the film simply fails to nail with any real regularity.
Whereas the original Jurassic Park made you wait by getting all of it’s exposition out of the way early just so it was free to unleash non-stop set pieces and abject wonder at you during the second half, The Lost World starts and stops like a puttering jeep as faceless background characters get nastily offed in a various of suprisingly spiteful ways. One dude gets stepped on and sticks to the giant clawed foot like chewing gum, another gets stalked and chased down by a swarm of chicken sized Compsognahus (try saying THAT five times fast) and tiger striped Raptors track their prey while cutting a path through long grass and while the enhanced bodycount is fun, it’s not really that different from an episode of Friday The 13th 65 million years in the making.
Disjointed and clumsy, the film manages to waste the majority of it’s cast who noticeably vanish long before the end credits with a tacked on finale involving a rampaging Rex stomping unchallanged through San Diego which scores big in box ticking but also manages to feel hugely out of place. The lopsided pacing also serves to highlight the worryingly large amount of Brachiosaur-sized plot holes that litter the story; if Julianne Moore’s character is such a dino expert, why is she hanging out bloodstained clothes out to dry when she plainly states in the previous scene that T-Rex’s can sniff it out? How did that Rex kill all the people on the boat yet still manage to get sealed back inside the cargo hold? Did Spielberg really think we’d not watch Malcolm’s kid use parallel bar gymnastics to kick a nine foot Velociraptor out of a window and NOT scream bullshit at the screen? 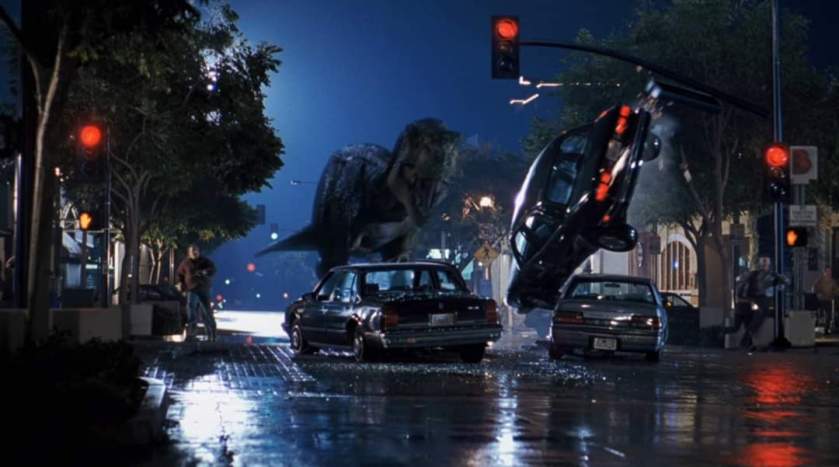 However, at the end of the day, even Spielberg at half-strength is still better than a lot of other directors in his field and with the enjoyably unique quirkisms of Jeff Goldblum now upgraded to the unencumbered lead, there’s still a lot to love when visiting The Lost World, but unlike it’s carnivorous stars, it seems to have bitten off more than it can chew…
🌟🌟🌟