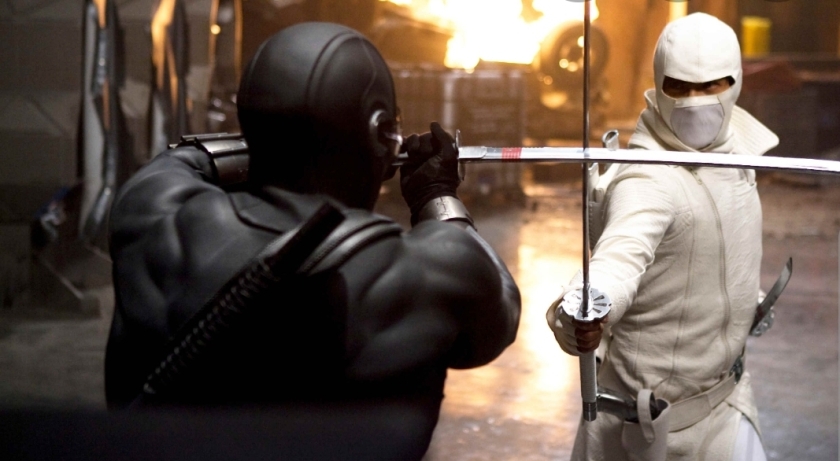 When enjoying/enduring the delights of a big budget summer flick, it often helps to deploy something that I call “the inner twelve year old”, an invaluable tool that allows you to connect with a more innocent part of yourself that has no interest in such things as logic or plot holes big enough to lose an experimental jet through. It’s especially handy considering that the vast majority of Hollywood’s output during the silly season is hardly of a consistent quality but surely no other director has required the usage of this talent than Stephen Sommers, the director responsible for the first two Mummy movies and the reprehensible Van Helsing. With G.I. Joe, a live action version of the popular 80’s toy line, he seemed to have found a perfect outlet for his particular aptitude for making very noisy, very violent movies almost exclusively for pre-teens with the film noticably stocking up on all explosions, ninjas and cleavage a child colliding with puberty could possibly want.
Hard nosed jarhead Duke is a soldier’s soldier, a warrior who makes sure the job gets done no matter what; but when his unit is ambushed by a terrorist organisation with far superior tech looking to steal prototype nanotechnology missiles, he and his wisecracking buddy Ripcord are bailed out by G.I. Joe: a clandestine international freedom force populated by rubber clad ass-kickers who only answer to silly code names such as busty crossbow expert Scarlett and devastatingly cool, grill-faced ninja Snake Eyes. Asked to join their elite fighting team (think a LESS subtle Team America), Duke and Ripcord are taken to the Pit, the Joe’s massive underground secret hideout which single handedly explains where all of our tax goes. As Duke and Ripcord train the evil forces of Cobra pool their resources under the command of corrupt arms dealer James MacCullen and their agents the slinky Baroness, master of disguise Zartan and the snowy clad Storm Shadow (White? Surely a fashion faux-par whether it’s after Labour Day or not.) begin to make their move on a master plan that isn’t really all that clear. What IS clear is that a lot of the combatants on both sides have long and bitter history with each other that makes a Spanish telenovela seem like Game Of Thrones: Duke and Baroness used to date and both have a hidden connection to MacCullen’s sinister, disfigured, science guy whereas Snake Eyes and Storm Shadow have been feuding since childhood and soon all this bad blood spills out into an explodey conflagration under the snow wastes of the Arctic that will eventually give birth to the metal headed Destro and the Darth Vader larynxed Cobra Comander. 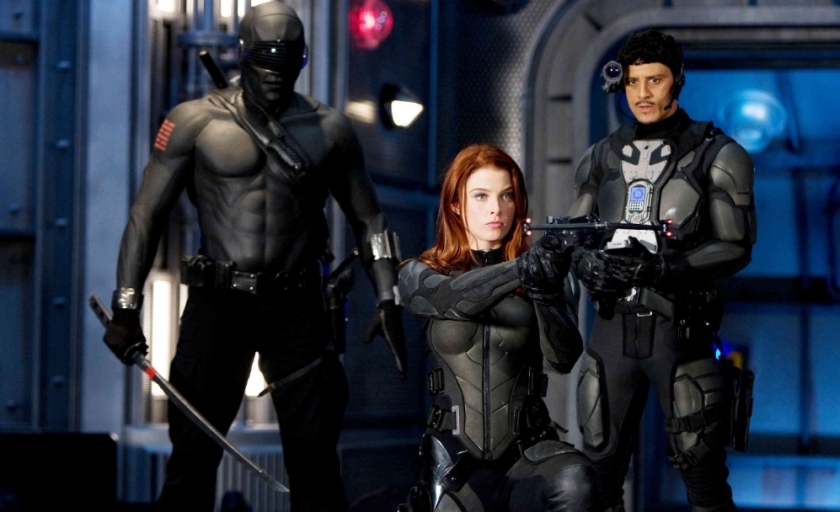 By reading the above synopsis it should come as no surprise that G.I. Joe: The Rise Of Cobra is an infantile piece of shit – and yet I’ve always found this movie hugely endearing and surprising fun thanks to how stunningly lacking in self awareness it is. Very early on we get a handle on how little grasp the film seems to have on the trajectory of it’s own story, losing control of it almost instantly with a nonsensical prologue set in 1641 that sets up…. Destro’s ancestors for some reason? The film is utterly rotten with flashbacks that strain to prop up the mountainous backstory with practically everyone pausing in thought at some point in the film to allow a memory integral to the plot to kick in like they all have some sort of battle-born neurological disorder.
A stunningly brutal fight between twelve year old versions of Snake Eyes and Storm Shadow also is a put place to bring up how stupendously violent the film is with the film casually dealing out it’s massively callous body count with reckless abandon; bodies melt, heads explode, at one point some dude gets impaled by a forklift truck and more background actors fall before various ninja weaponry than you’d think possible with a PG-13 rating.
The characterizations are, obviously, cartoon level which is fitting despite how bewilderingly awful they all are but even with this in mind, your senses reel at some of the concentrated dumb that vomits from the mouths of the establish cast. To say that the dialogue is next level hyperbolic claptrap is a stunning understatement, with Sommer’s script dropping frequent clangers that established actors stuggle to vocalise while barely keeping a straight face. “Technically, we don’t exist!” Proudly booms Dennis Quaid’s Hawk, blissfully unaware that the term he’s looking for is “officially” and that to “technically” not exist pretty much means they actually don’t exist. Such a blooper would almost be forgivable but the samn line showed up in the damn trailer for God’s sake.
As the script struggles to keep all of it’s player’s in order (an early scene showing the all of villainous cast communicating using more holograms that a posthumous Michael Jackson gig) it allows for huge amounts of guffaw inducing plot holes to parade around in front of your disbelieving eyeballs. Would you really keep a water tank for practicing undersea battle training that contains billion gallons of H2O two floors ABOVE the living quarters; why the hell would you programme a fighter jet’s weapon system to not only be voice activated but to be in celtic (we get it Sommers, you’ve kept Destro Scottish!) and why is the movie subtitled The Rise Of Cobra when, with it’s huge, undersea base populated with hundreds of guards, the terrorist organisation already seems pretty solidly established.
The plot, such as it is, is obsessed with nanomites, that go-to macguffin that’s be used to explain away any plot wrinkles in any movie made over the last 20 years; but here the tech might as well be fucking witchcraft as the little robot bastards can seem to be able to do ANYTHING the story requires which includes such diverse traits as being able to disolve the Eiffel Tower, mind control, the ability to alter flesh into living metal. Even by the questionably standards laid down by a movie based on an 80’s toy line it’s impressively lazy bollocks which manages to make the multipurpose Allspark cube from Transformers seem like the Maltese Falcon of plot devices.
Struggling to make themselves heard over the roaring of CGI vehicles and a metric ton of explosion, most of the cast manage to actually get the tone the film is wildly shooting for – it IS based on an animated toy advert after all – although the presence of Joseph Gordon Levitt and Jonathan Pryce (as the American President!?!?) still baffles me to this day.
However, the film just can’t escape that lead character Duke is obviously a massive prick, something that isn’t helped by the fact that Channing Tatum simply doesn’t want to be there, a fact that is marked by the disdain etched on every square inch on his face. His snobbishness concerning a film that’s PAYING him to be a hero would be more understandable if he was being treated badly by the script (Rachel Nichols’ Scarlett may be smart and tough but still has a whole scene where she is required to hold a conversation while jogging on a running machine in a tank top) but as it stands he seems to be the only one who doesn’t seem to be getting the joke.
And yet, seemingly against all the odds, G.I. Joe: TROC finally manages achieves a level of idiotic nirvana with a mid-film chase sequence that bulleyes a ludicrous sweet spot as Duke and Ripcord, both clad in Robocop style suits that let them sprint through walls like Usain Bolt had had an illegitimate child after a fucking tank. As the main players literally rip the streets of Paris a brand new shit-chute with a shocking disregard for the safety of ANYONE in the vicinity (Duke fires a missile directly at the Baroness’ getaway vehicle even though Snake Eyes is still frantically clinging to the underside) and the sequence ends doubtlessly with a huge amount of collateral damage, dozens of motorists dead (which no one suspiciously mentions) and with the Eiffel Tower taking an early bath in the Seine. It’s laughably ridiculous four-star scene in a two-star movie and by completely bloody awesome manages to bring up the average for the entire movie. Similarly, despite large changes to the source material (my knowledge of Joe lore mostly comes from Marvel’s late-80’s comics run), the B-plot animosity between the movie’s duelling ninjas is nicely carried out thanks to the numerous twirling attacks from Byung-Hun Lee and Ray Park – although whomever decided that Snake Eyes should have creepy, visible, gimp-suit-style lips should be given 20 lashes… 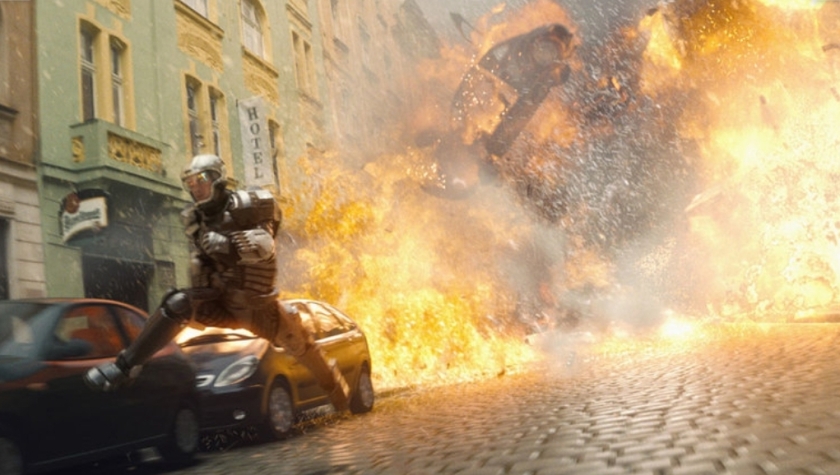 Laughable for all the wrong reasons and yet managing to be a triumph of so-bad-it’s-good awfulness, G.I. Joe proves to be highly watchable despite the fact that it feels it should have the disclaimer “all figures sold separately” emblazoned across the bottom of the screen for the entire runtime…
🌟🌟🌟